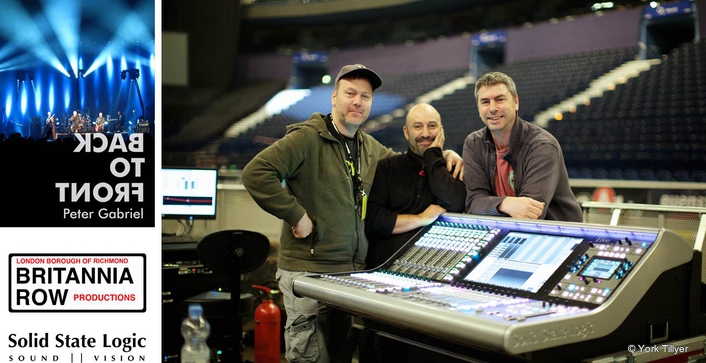 Dickie Chappell, Dee Miller and Ben Findlay on the Back To Front tour
When the company’s owner mandates the use of its latest technology for its first major tour, you can be sure everyone involved, knowing his perfectionist approach, gives it their full attention and then some. Peter Gabriel’s Back to Front tour made full use of the new SSL Live consoles supplied by Britannia Row Productions for the first part of the tour in Sept/Oct 2013, and will continue to demand perfection from the console when the tour resumes in April 2014. Happily, the hard work paid off and artists, engineers and SSL’s design team were all thrilled with the results – as were audiences across Europe.

Three Live consoles were employed to handle the Back to Front performances. One at front-of-house, one was for the band’s monitors and one was used for Peter Gabriel’s monitoring system. All the consoles performed flawlessly.

“The first thing to say about Live is that it sounds really good and makes mixing live audio very easy,” says Ben Findlay, FOH engineer. “You get lots of separation and clarity. The EQ is musical, never harsh, and the dynamics are transparent even when compressing a signal hard, as you would expect from an SSL console. The mixes come together quickly when starting from scratch. Because the audio is very clearly defined, you have more options regarding relative levels, so elements of a mix that may normally be masked with another console are still clearly audible. This leads to accomplishing the often illusive third dimension to a mix that live engineers strive for — and that is a real sense of depth. The console is also extremely reliable with not so much as a flicker during the whole tour. I am now at the stage where I am sure I would miss Live if I had to revert to my previous system. Live is a great console.”

The Live console was designed to appeal to engineers with a range of operational approaches and can be used very flexibly. The Back to Front shows provided clear evidence as the three highly experienced mixers took advantage of the adaptable bus architecture, processing tools and user interface options to support their personal approach to the differing tasks they were managing. 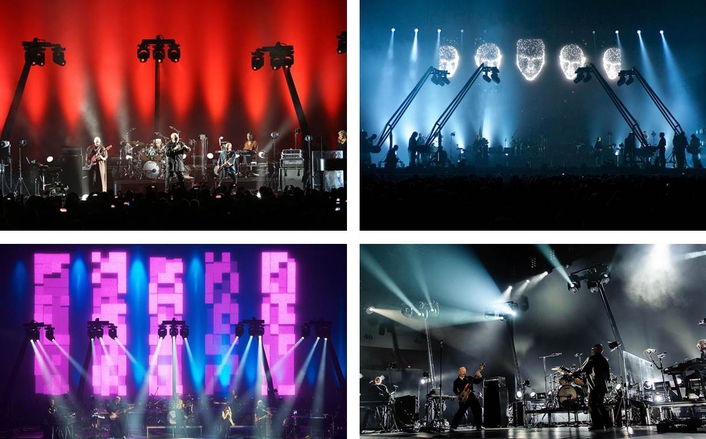 “Ben and I recorded a multi-track version of the Back to Front show during the U.S. tour in 2012, so we had a ready reference to run through the Live console when it became available before official show rehearsals,” says Richard Chappell, Peter Gabriel’s live show coordinator and personal monitoring and studio engineer. “When we first worked with Live, we realized how very exciting and pioneering this console was. This console sounds great. The first part of the learning curve was the impressive touch screen that allowed each of us to configure the setup the way we wanted to work. The needs of monitoring are, after all, different from FOH. For me, Live is the engineering equivalent of what a musical instrument is to a performer. I can now do what I do better with Live. Secondly, I’ve heard horror stories in the past about other new consoles going out and crashing or not working. With Live, we never lost a show, it always worked.” 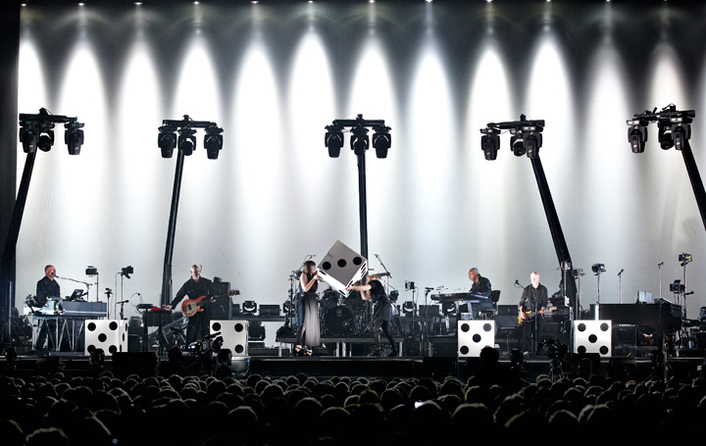 “Live is a hybrid console that has a touch screen but it’s also button operated; a real crossover between two ways of working,” says monitor engineer Dee Miller. “For an engineer, it’s a very powerful tool and capable of doing a lot of things. What I’ve had to do is learn how to use the desk to mix the show my way, so Live is a tool for any particular job as opposed to bending a job around a different manufacturer’s tool. It’s got some great features on it and it’s very powerful. Live sounds great, the clarity is extremely good and I would just say that you can hear everything really, really well. From an engineering point of view, I made many performers happy with their monitor mixes using Live.”