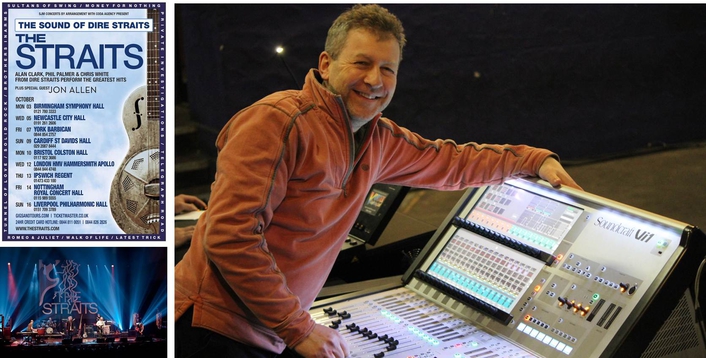 The Vi1 also offers four Lexicon effects engines
When members of Dire Straits got back together for a one-off charity event at the Albert Hall, sound engineer Matthew Manasse was asked to look after the front of house mix. Having previous connections with keyboard player Alan Clark, and being a close colleague of their original engineer Robert Collins, Matthew was an obvious choice.

The incredible response led to repeated demands for the band to play again—and so ‘The Straits’ took to the road. This culminated in a full European tour recently that saw Matthew Manasse mixing the shows on a Soundcraft Vi1.

Having toured with some of the biggest names in the industry, from Dave Brubeck and Katie Melua to Rufus Wainwright and Pink, Manasse is highly regarded in the world of professional audio. However, in a world of ever tightening budgets he had become disillusioned with the touring market and left it to concentrate on running his new venture, Bluefish Live Events, to service the corporate events market.

But The Straits tour proved irresistible and as an early champion of Soundcraft’s Vi6, he had no hesitation in turning again to the company’s digital platform. The Vi1 was provided by Sound Technology, HARMAN’s distributor in the UK and ROI.

Fortunately, Soundcraft was one step ahead. “There are five user definable fader layers so I’ve been able to group together the inputs that I need for different elements of the show,” Manasse said. “Accessing the right channel has never been so easy. With sound levels ranging from around 70dB up to the dramatic peaks of around 108dB, I needed a digital console that was versatile, small and flexible and that could handle that dynamic range without running out of headroom.”

The system has been programmed so there is a page for the opening number, a different page for the rocky songs and a third for the more acoustic ones. “On each of these fader pages I have the key input channels visible that I know I’ll need to access quickly,” Matthew continued. “Obviously some channels, such as the lead vocal, will appear on all these pages but that’s what makes this desk so flexible. I always have the inputs I need at my fingertips.”

Whereas previously he would simply recall a snapshot for every song, with the user definable layers he’s decided to mix the show on the fly, making the experience a lot more fun. “This has the effect of keeping the whole mix fresh as I have to stay completely involved.”

The other area where the console scores highly is on the output section. Concert Sound Clair, which has a long history with both Manasse and Dire Straits, is providing a monitor system and FOH control for the tour.

“As we aren’t able to carry a full PA system, CSC had given me an advanced processor as part of the package so that I could take complete control of the house systems that I’m using—but due to the number of matrix outputs on the Vi1, all with delay and EQ, I haven’t needed it once,” Manasse added.

CSC also provided a Vi stagerack, adding 64 mic/line inputs on stage to the 32 on the back of the console, which was a further bonus. The sound engineer noted that since the Soundcraft preamps are modelled on the Studer, this provided him with “an exceptional sound.”

The Vi1 also offers four Lexicon effects engines, which Manasse has been using sparingly on percussion, acoustic guitar, sax, vocals and the signature National steel guitar. “I am a huge fan of the built-in Lexicon effects,” he said, “and the Vistonics™ interface on the Vi1 makes it is so much more flexible and intuitive.”

One facility on the Vi1, which he regards as essential, is the input channel delay. “A few years ago I started to experiment with time alignment and now apply this to every mic on stage; it’s time consuming but the results speak for themselves as there is a marked increase in clarity and depth within the mix.The big advantage is that I can keep the acoustic guitars sounding like acoustic guitars, I don’t have to use the EQ to make them cut through as I’m already creating the ‘space’ with the time correction. By reducing the amount of ‘mess’ onstage I can keep the whole band sounding more natural.”

With Gareth Lewis on monitors and Nick Belshaw tour managing, the house engineer reflects on a thoroughly enjoyable tour of duty, before he again replaces the world of circuit venues (averaging out at around 1,500 capacity), to four and five star hotel conference and banqueting rooms.