Something for The Weeknd from Ayrton 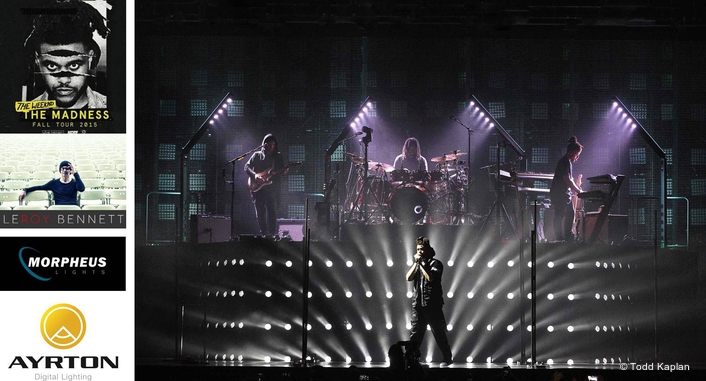 The sold-out Madness Fall Tour by Canadian singer, songwriter and record producer, The Weeknd, in support of his third studio album, Beauty Behind the Madness, was a spectacular production, with set and lighting design by LeRoy Bennett of Seven Design Works. It incorporated over 650 lighting fixtures from Ayrton - including ‘every available IntelliPix™-R fixture on the planet’ – to help realise a design concept that delivered a multiplicity of looks from the subtly atmospheric to a totally engulfing spectacle.

The music of Abel Tesfaye, the musician known as The Weeknd, is very dark and cinematic. Bennett reflected this by creating a mutable set with lots of transparency, depth and changing personalities.

Ayrton fixtures featured heavily in its creation with a grid of 270 MagicPanel™ 602 fixtures forming a back wall that hid two rows of washlights, and which itself was concealed behind a transparent V-Thru screen. Tesfaye’s band was elevated on a high band riser fronted by 140 MagicDot™-R units, with the band members individually lit by Ayrton MADesign™ architectural fixtures. Above the stage hung a massive arrangement of 264 IntelliPix™-R panels, rigged in five pods that broke apart to shape, texture and illuminate the stage.

The result was the formation of layers upon layers of imagery and light, set against a deep black background, in support of a compelling, dramatic performance.

Bennett placed the MagicPanel™-602 units in a 30-wide x 9-high matrix far upstage and ran video content and abstract images through them to act as a backdrop to the band: “The wall made a big rectangular rig with the 6x6 configuration of each MagicPanel delivering a total of 9,270 LED emitters,” says programmer, Jason Baeri. “It was a dream to pixel map, which we did using a Hippotizer media server to create really clear images and run the video content.” Baeri, who Bennett refers to as his ‘Master of Programming’, is one of the most experienced users of Ayrton products. “We have been using these MagicPanel models for a number of years and they continue to be rock solid,” he confirms.

Ayrton’s unique MADesign™ fixture was originally designed for use as an interior architectural light, but Bennett found them ‘perfect for lighting a band’. The stand-alone MADesign has five independently controlled, RGBW LED emitters on a long ‘boom’ arm which Bennett used to create an isolated lighting system around each band member.  Two fixtures were used to light the drummer and one each for the guitarist and base player, proving an ideal solution that melded beautifully with the carefully crafted atmosphere around the performances. “The MADesign is a really low profile key light that produces a lot of light out of a tiny little strip,” says Baeri. “It’s ideal for subtly side and back lighting the band without putting too much light in from the front. It was easy to use, with handy lenses that pop out and focus individually, so we could focus tight on each musician yet keep the lighting low profile.”

The Ayrton MagicDot™-R fixtures were wrapped around the front of the band riser in a 28 wide x 5 high grid. “We used them primarily to create a brick of light behind Abel and to add a little extra punch to the musical accents,” says Baeri. “MagicDots are the quickest thing on the market right now, and their tight beam makes them a great effect light, especially when we use them en masse.”

Having first used Ayrton IntelliPix™-R on a small scale for Korean K-pop band, Big Bang, Bennett was determined to use these modular beam projection panels to build a structure for a large-scale application. The Weeknd tour was his first opportunity to put this into practice.

Bennett created five overhead pods that form irregular, three-dimensional ‘chevrons’ with IntelliPix-R panels on all horizontal and vertical surfaces.  The central structure, made of three interlocking clusters, spanned the upstage and downstage areas and could break apart into sections to constantly change the shape of the performance space. Two outer pods situated over the VIP areas left and right could be raised and lowered independently and orientated in all directions, using a TAIT Navigator control system.

“My original intent was to have individual moving cubes, but there are only so many IntelliPix panels on the planet!” Bennett says. “So I modified the design to the bounds of reality while maintaining the concept of the vibe. As it is, we set out on the road with every available IntelliPix fixture in the world.” Ayrton’s US distributor, Las Vegas-based Morpheus Lights, assembled the ‘all-in’ IntelliPix package for the tour’s lighting contractor, Upstaging Inc. of Sycamore, Illinois with the cooperation of VisionStage of Detmold, Germany and Impact Evènement of Paris, France. All contributed their total stock of IntelliPix-R fixtures, with Ayrton manufacturing the remainder to meet Bennett’s design specification. “Morpheus is fantastic at responding to my requests and procuring whatever I want from all over the world!” says Bennett. 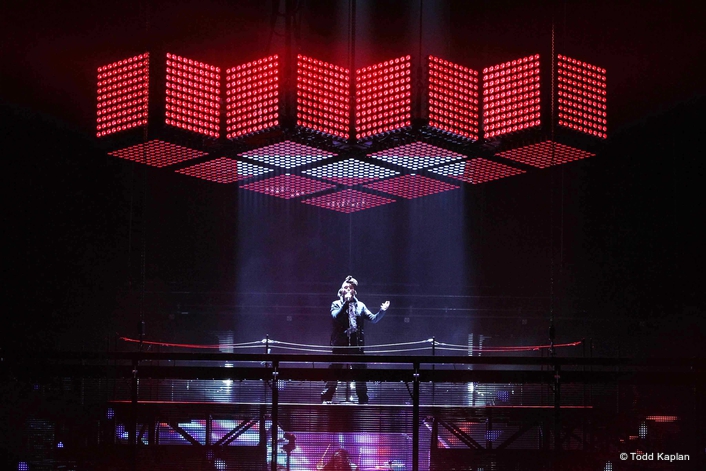 “It was quite the logistical exercise to achieve the ‘critical mass’ of IntelliPix-R units to meet Roy’s vision,” says Morpheus’ Managing Partner, Paul Weller. “We are deeply indebted to Ayrton’s other distributors and dealers who helped Morpheus pull out the stops to enable this incredible rig to be realized.”

Bennett used the overhead structures to change the shape of the stage and create a different configuration for every song, compressing the show to a small intimate space one moment and expanding it outwards at others in a range of dynamic stage effects, with the units being used both as light sources and to display graphical images. His use of the semi-transparent IntelliPix-R was subtle and immensely varied, with lighting fixtures across the whole rig deliberately kept barely visible until the moment they were brought into action.

“Able is not a pop star,” Bennett explains. “His music is darker, like Michael Jackson meets Nine Inch Nails. He likes to be lit with a high degree of contrast and little front light, so there were no front spots and only two side spots in my design. Instead, I used the IntelliPix to create little ‘rooms’ of light around him from above: the units are so punchy and bright that, even from a height of 30/40ft, we were able to key him out in any colour, using only 30/40 emitters, and really isolate him from his surroundings.”

Baeri agrees: “IntelliPix-R is a subdued fixture which we can keep hidden until we need it, then we can suddenly unleash its giant beams of light.”

Yet he also enjoys the creativity the fixtures allow: “IntelliPix-R produces the tightest beam of all Ayrton fixtures so patterns read like video content. For example, we made a fire effect using the individually controllable emitters to ‘paint’ an image and found the panels were able to project images of the fire into the sky adding another layer of depth above and beyond just a normal low-res video panel.

“We were able to do this because we chose to control the IntelliPix manually, without any pixel mapping. We made a conscious decision to work this way because I wanted to be able to drill right down to the individual emitters and use them as pixels to paint a picture. We took each emitter, set up groups, took hundreds of selections and re-orientating the images manually. It was time consuming but I’d hate to have a fixture as intricate as the IntelliPix-R and not use it to its full potential.”

With a total of 16,480 points of light emanating from the Ayrton fixtures, which made up almost 90% of the lighting rig, Bennett and Baeri had a lot of potential to play with: “We don’t do a lot of simple!” says Baeri. “We used 140 DMX universes and maxed out the Grand MA2 console so ran the show off two desks – one controlling the video content and MagicPanel 602 fixtures, and the other controlling the IntelliPix-R units and the rest of the lighting rig. Upstaging did a great job of putting it together – the network was very taxing but they built a very sturdy system.”

“The array of different Ayrton fixtures gave us a lot of versatility which was perfect for the job,” concludes Bennett. “Ayrton lights are like different individuals within a family, each with their own personalities, which all work really well together as a team. They are really fun to work with - well made and very reliable. 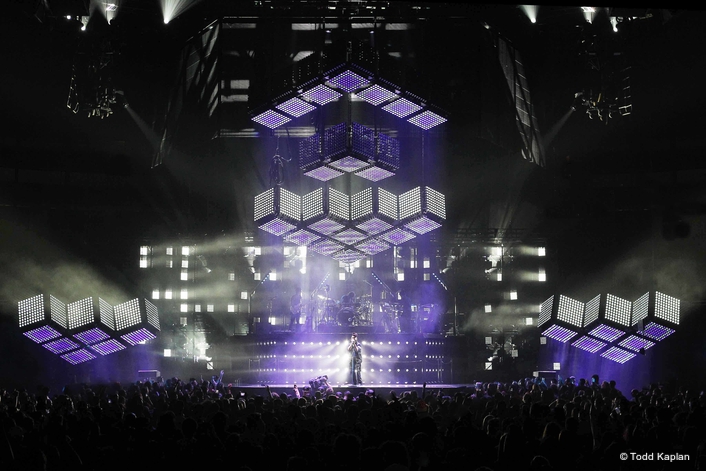 “I am a great advocate of the company because of their ambition, and the level of support they give. We have a good dialogue with the people at Ayrton who are open to modifying their products to give the result we want. They have been very supportive on this show, as they have been on all the shows we have done with them over the past few years.”