Some Kind of Heaven Hurts for Colour Sound 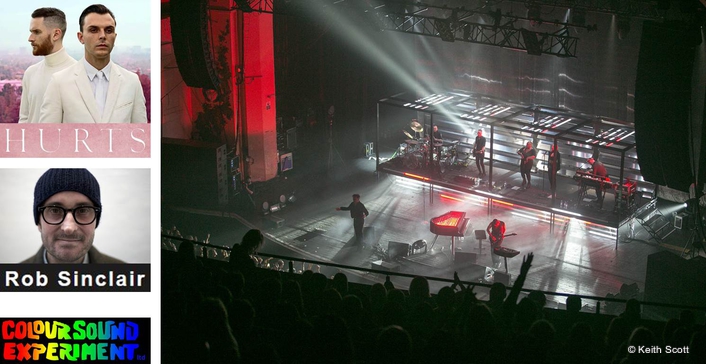 Leading west London based lighting and visuals rental company Colour Sound Experiment is supplying lighting equipment and crew  to the current European tour by synthpop duo Hurts, riding high on the success of their third album ‘Surrender’ with an innovative production design by Rob Sinclair.

Colour Sound invested in 100 x new Martin VDO Sceptron 10 LED battens for the tour for which lighting is being directed and operated on the road by Matt Arthur.

Says Colour Sound’s Haydn Cruickshank (H), “We’ve supplied the last few Hurts tours, and you know that anything in which Rob is involved … is always going to look interesting! This is no exception”. 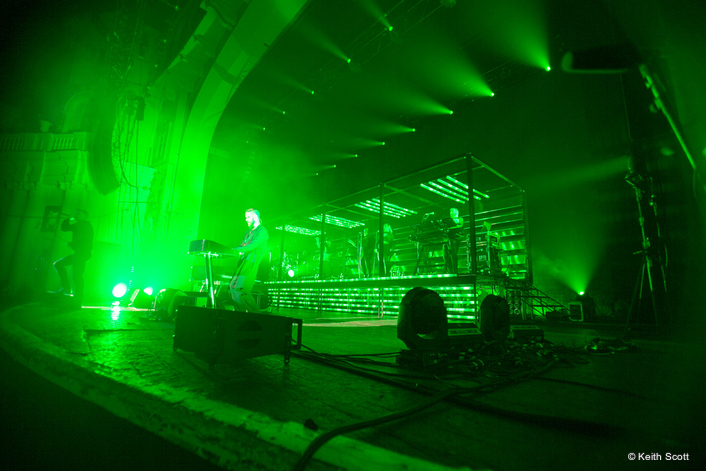 Rob and the band’s initial inspiration for the band-in-boxes set design came from several operatic references to capture the essence of the unique ‘classic but dynamic’ look they wanted.

The addition of a set of 4-position – manually controlled - reflective louvres at the back of each cage enables sheets and shafts of light from the various mid and up-stage fixtures to be filtered through, directed, reflected and bounced around, all adding further visual dimensions to the show. 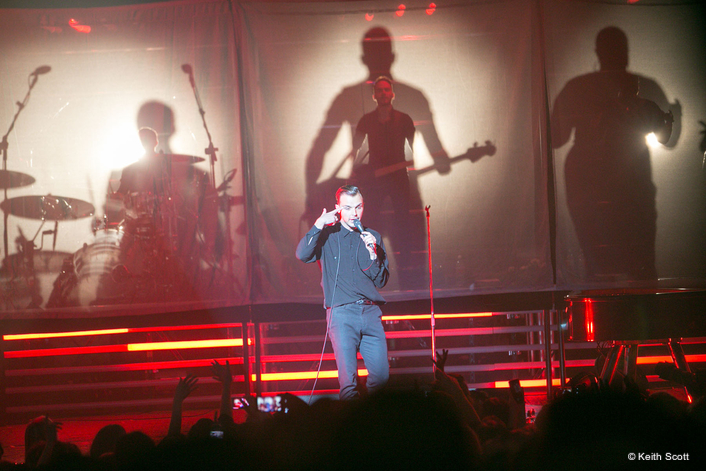 Starting with the set as that defines the stage space, the four cages are 8ft high and built on 8ft wide by 10 ft. deep riser decks, 3 ft. off the stage.

In the roof of each band cage are four 2-metre runs of Sceptron (2 conjoined strips each) so 32 fixtures in total, with the other 54 Sceptrons aligned along the front of the cage riser in continuous lines, all fitted with the large, white, rounded diffusers to fill as much airspace as possible. These are set 150 mm apart, resembling a neon fence.

The Sceptrons – running in 10 channel basic mode and utilising the internal effects as well as programmed sequences via the lighting console - are the main aesthetic feature, establishing the look of the show and bring an edgy industrial tone concurrent with the darker elements of Hurts’ music that lurk behind the swaying synths and catchy vocal harmonies.

In the air are three trusses – front, mid and rear.

The back truss features another 8 x MMX Spots and the reversible backdrop, which can be hung one way for a brown look and reversed to give a silver effect and was sourced from EventServ Drapage in Dublin. Light from these MMXs do a lot of work above the set cages interacting with the louvres. 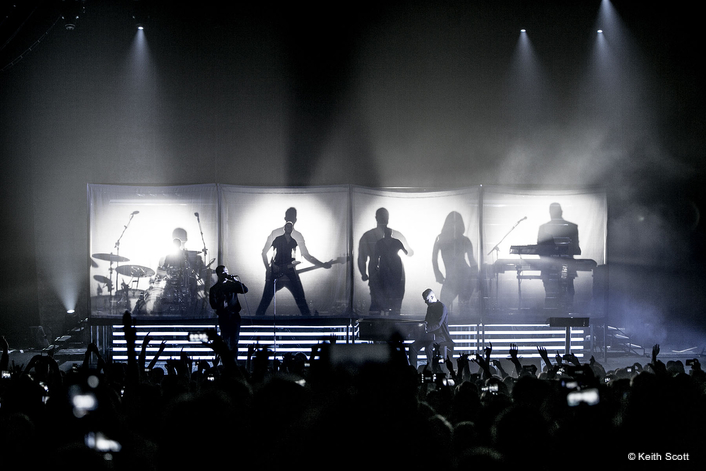 On the front truss are another 7 x Source Four profiles and some 8-lite blinders for the audience.

On the floor are six Robe LEDWash 600s, two a side in the downstage positions for Hurts (Theo Hutchcraft & Adam Anderson) and one each side in the mid-downstage area, shooting across the band risers.

Far upstage right at the back is a row of 6 x Robe BMFL Spots on the floor and some blinders for blasting through the set. The BMFLs are used to produce big, mega-bright blocks of expressionist-style light which can be further varied via the different louvre positions.

Also upstage are 4 x Source Fours without lens tubes which silhouette the band in their riser cages for the first two numbers of the set, and later on fire past them and out into the audience.

Thirteen atomic strobes are dotted around, with two either side of stage, five on the top deck of the risers facing forward and four under the risers firing through the Sceptron ‘fence’.

Everything is controlled by Matt using his own Jands Vista S1 with 2 x M1 playback wings and laptop control.

He particularly likes the interesting reflective effects produced during the dancey “Better than Love”. 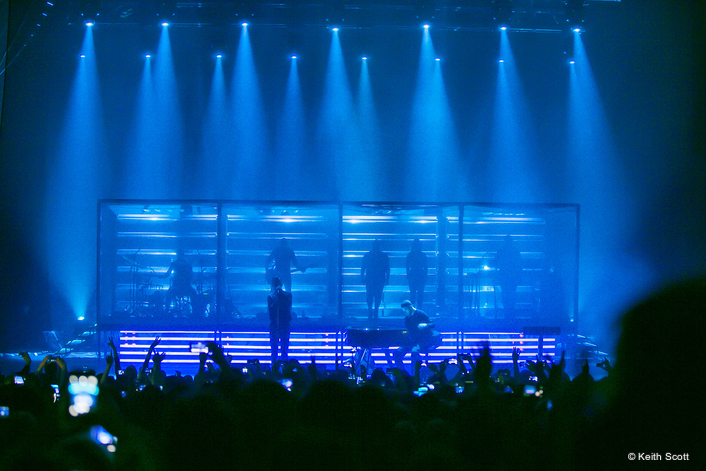 Rob’s favourite parts of the show to light include the start, where the band is visible but revealed only by shadows; the strobe-tastics of “Evelyn” and the appropriately named “Lights” for which he reveals they had “great fun throwing away the Hurts style-book!”

On Colour Sound, Rob comments, “We’ve always had great service and excellent well-motivated people involved who have helped us stretch our budgets as far as they can possibly go”.

Matt adds that the packaging from Colour Sound has been “Top Notch” including purchasing of the Sceptrons and newly re-lamping all the MMX Spots beforehand. 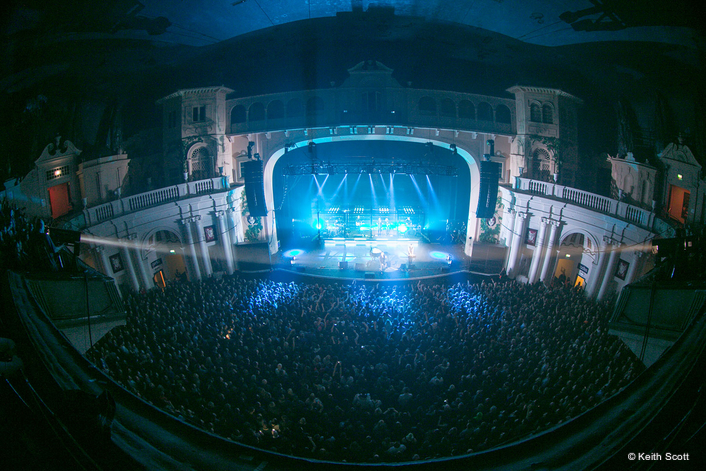 Colour Sound’s crew on the tour are Hadyn Williams and Jon ‘JC’ Curtis plus crew chief Tom Bailey, who has worked with Rob and Matt on the last three Hurts tours. Alex Ryan is the Colour Sound project manager and co-ordinator, and his efforts have been much appreciated by Matt and Rob.

The set was built by Get Set, and managing team Hurts on tour is production manager, Craig Sherwood.