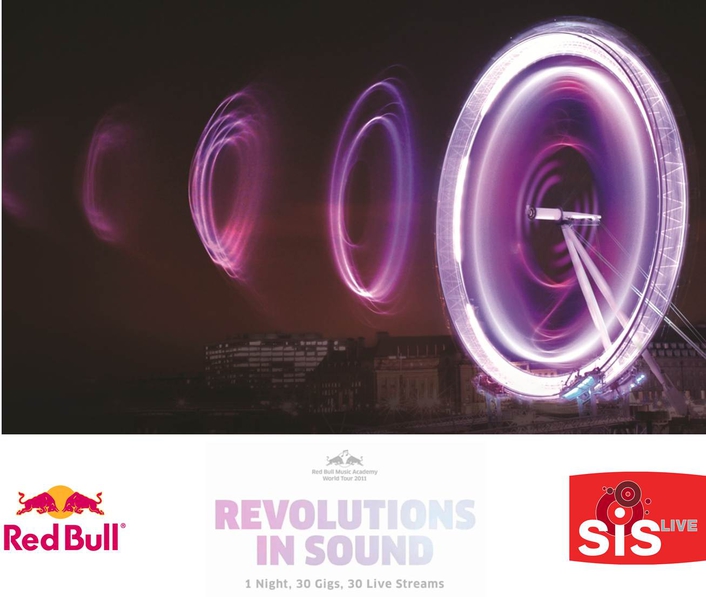 Red Bull Revolutions in Sound
Outside broadcast and satellite uplink specialist SIS LIVE are excited to be working with the Red Bull Music Academy on an ambitious and unique event which will see 30 music gigs simultaneously broadcast live on the internet, online radio and to a live audience from the EDF Energy London Eye.

The EDF Energy London Eye, which dominates the skyline of the Southbank area of the River Thames stands 135-metres tall and comprises 32 passenger capsules, representing each of the London boroughs.  Tonight, 30 of these capsules will play host to a range of bands, producers and DJs such as Ms Dynamite, Kano, Andrew Weatherall, Beardyman and Don Letts, plus some special guests from the Red Bull Music Academy.

SIS LIVE are providing OB 3 and Link 21 vehicles, plus operators and equipment to produce live video streams from 4 of the capsules, and audio streams from all 30 capsules to be broadcast on the Red Bull Music Academy Radio player.

Inside each of the 4 ‘video enabled’ capsules feeds from 2 x HD Cameras will be linked via Radio Frequency (RF) to Link 21 and then passed on to OB 3 where they will be cut using one of four RouteCases® situated on the rear desks of the production area. RouteCase, a SIS LIVE designed and developed product, is a self-contained, compact HD portable production studio which lends itself perfectly to this sort of live mixing environment.

The remaining 26 capsules will have audio only radio transmitters fed by a small audio mixing desk which will send the audio down to OB3. This sound will be routed through the sound desk for TV treatment before getting to RouteCase. The output will then go back onto the matrix before being sent for streaming.

Streaming server towers and cabling into OB 3 for 34 stereo pairs of audio and 4 video streams are installed, with 3 x i-direct modems in Link 21 connecting directly to each streaming tower.

James Clement, sales director, SIS LIVE says “The planning and preparation has been meticulous, particularly as the teams will only be allowed access to the capsules 90 minutes before the live event. We are pleased to have be so heavily involved in this exciting and elaborate show.”

So, the end result is that the viewers at home will get to see close up coverage of each gig from 2 cameras, cut with a wide shot of the whole wheel in motion as well as graphics fed by an EVS XT[2] identifying the artist.

Additionally, audio outputs are being sent to the Delta Sound ‘Silent Disco’ which will take place at the foot of the wheel. Using radio headsets the audience will be able to dial in to their gig of choice and dance to their hearts content, whilst also providing amusement for those without headsets. The EDF Energy London Eye’s in house IP system is also fed with a quad split of the 4 filmed acts.

David Meynell, managing director, SIS LIVE says “We are proud to be working so closely with the Red Bull moving image department to pull off this ambitious production, which will demonstrate not only the expertise of SIS LIVE’s operational team, but also the innovation and reliability of our award winning product range.”

This event is brought to you by the Red Bull Music Academy, a world-travelling series of music workshops and festivals and a platform for those who shape our musical future. Visit their website for more information.