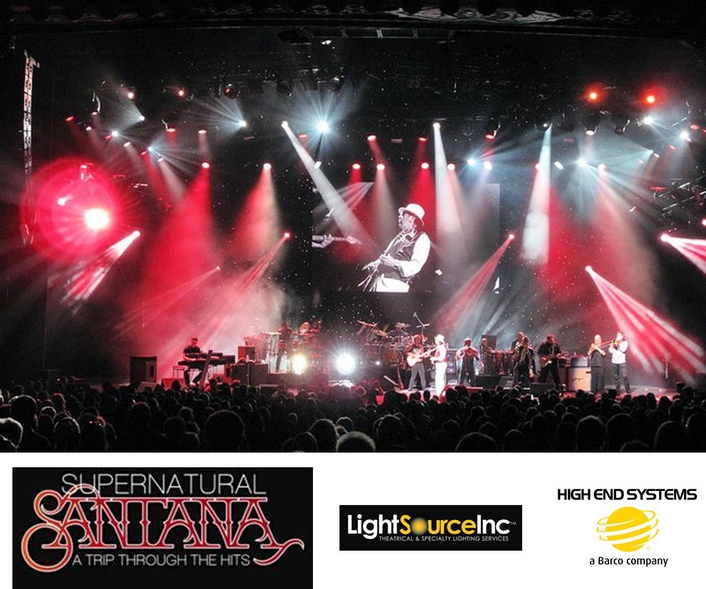 LD Lee Gipson specs HES luminaires in the rig
LD Lee Gipson shares his recipe for lighting designs: see what ingredients are in the warehouse, make sure it fits the budget, and then create with what you’ve got. “Face it, that’s the reality of design,” he said. He likens it to a buffet-table approach to lighting selection, he described: “I’ll take a few of those and some of these over here and do you have a few more of that. And there, it’s done.”

But one thing he specifically looks for, he said, are High End Systems, a Barco company, SHOWGUN 2.5s. “I always try to make sure I have them in my rig,” he said. For Santana’s current tour, he specified 18 SHOWGUN 2.5s, supplied by Light Source Inc. of Milford, MI.

Rick O’Neill of Light Source Inc. said the company has supplied various items of equipment over the years for Santana, but for this tour they are providing the complete system with 150 automated luminaires. Besides SHOWGUN 2.5s, Light Source Inc. features other High End Systems lighting products are in their inventory as well.

Gipson uses SHOWGUN 2.5s for many reasons. Is it the bright output? The big exiting beam? The LED ring? “‘I just love it,” he said. “What else can I say?”

Gipson is in his ninth year as the LD for Carlos Santana, a gig that was supposed to be a two-week temporary job to help someone else in that position. Santana keeps him busy at least six or seven months of the year on tours, not including other special appearances. Santana is currently touring throughout North America, ending in October in Mexico.

SHOWGUN 2.5s also appeared in Carlos Santana’s rig while in his two-year residency at The Joint at the Hard Rock Hotel & Casino in Las Vegas, as they are installed in the venue. In November, Santana and the band return to The Joint for three nights of an encore performance, “Supernatural Santana: A Trip Through The Hits.”

University of Alabama Pre...ance in Another Dimension
Iron Maiden Chooses HES for ‘Final Frontier’
Scorpions: Live on Tape in 3D