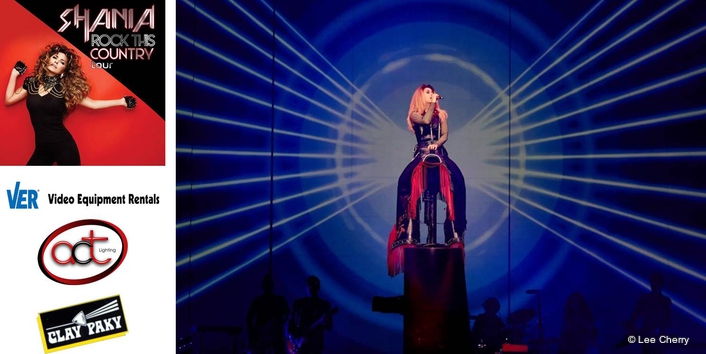 Her farewell tour is called “Rock This Country,” and country icon Shania Twain is doing just that as she bids good-bye to her fans from coast to coast.  More than 300 Clay Paky lighting fixtures are along for the ride, selected by lighting designer Mark Butts who also serves as the tour’s coproduction designer with Raj Kapoor.

Last year when Twain was in her residency at Caesar’s Palace, Las Vegas where Kapoor was her show director, Butts conceived a “big, edgy, modern rock ‘n roll look” for her farewell tour.  “I wanted a big lighting rig, big pyro, lots of automation – the biggest possible system that we could easily move around the country,” he says.  “And that led me to Clay Paky.”

According to Butts, “the only way to implement a rig of this size was to use super efficient small, high-power lights with a ton of features.  There was no way I could have done this without Clay Paky gear, especially Mythos – I couldn’t have done the show with standard, giant 1500-watt hard-edged fixtures.  So I designed the show around the gear.”  VER supplied the lighting to Butts’s specifications.

56 Clay Paky’s new Mythos fixtures are touring with Twain.  Butts had evaluated Mythos demo units last year and used a large number of them on Kenny Chesney’s current “Big Revival” tour.  “I had a lot of experience with them and knew they would work for Shania,” he says. 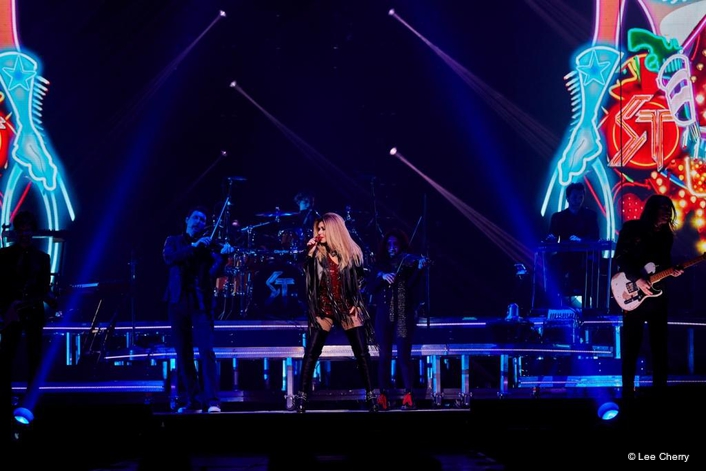 Most of the Mythos fixtures are mounted on ten upstage and ten downstage truss fingers, which run perpendicular to the primary lighting truss, notes Nashville-based lighting director and programmer Andre Petrus.  “The Mythos are great – super bright and with low power consumption,” he says.  “They act as beam or profile fixtures with color mixing optics and animation wheels.”

96 A.leda B-EYE K20s are housed in six big automated aluminum pods, which can rise in the air or descend to the stage deck.  Each pod contains 16 B-EYEs in a 4x4 configuration.  “I knew that having big banks of them would be a major element of the show,” says Butts.  “I like their individual pixel control and organic shape.”

Butts devised a unique way to showcase 120 Sharpy fixtures: He integrated them into 12 30-foot high moving set pieces.  “I didn’t wanted to be locked into a giant upstage videowall,” he says.  “So we designed chunks of wall that could spin and move on a track.  Each piece has a 5-mil LED wall on one side and a vertical row of ten Sharpys on the other.  The pieces can spread out or come together in any configuration.  I picked Sharpys because I wanted to pack a lot of lightweight, low-power fixtures with a lot of punch into a small space.  They were the perfect choice.” 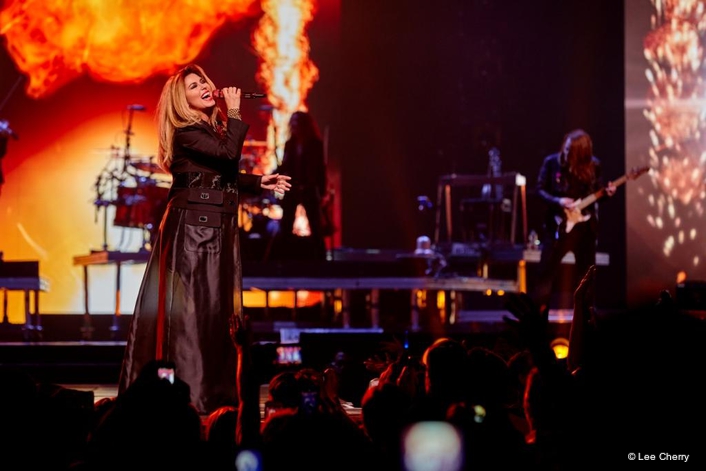 Petrus says the possible combinations for the modular moving LED/light walls are “almost endless.  They can create a different look for every song.”  He notes that, “the band risers also track stage right to stage left so the band is constantly on the move, too.” 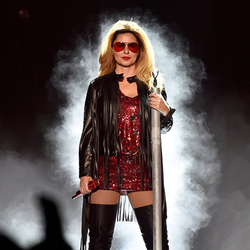 72 Sharpy Washes are also mounted in the truss fingers where they wash the stage and band and deliver “big, cool aerial beam effects,” says Petrus.  “I love how small and efficient they are while having a narrow, bright beam almost like Sharpy,” adds Butts.  “They’re pretty versatile.”

Butts gives kudos to the continuing support he gets from A.C.T Lighting and its staff members, especially for big projects like the tour.  “A.C.T is the gold standard in product support, so when they started to represent Clay Paky that told me all I needed to know about the products,” he says.  “I haven’t been disappointed.”

Francesco Romagnoli, Clay Paky Area Manager for North and Latin America, added, “We’ve been a big fan of Mark’s work for years.  It’s great to see him on this tour and we’re thrilled that he’s using so much of our gear.”