.
With a live television transmission from Arena Multiuso in Rio de Janeiro, the Brazilian award ceremony, Prêmio de Multishow de Música Brasileira, presented the best music of the year and awarded national artists and bands based on audience voting, and a panel of experts consisting of journalists and music industry professionals.

Spectrun Design e Iluminaςão is the company behind the lighting for the show and they called on 66 SGM P-5 wash lights and 28 SixPack blinders to complete their task. As the company’s track record demonstrates, Spectrun Design e Iluminaςão is a versatile player on the market; they not only supply equipment for events, they in fact also create the projects themselves. 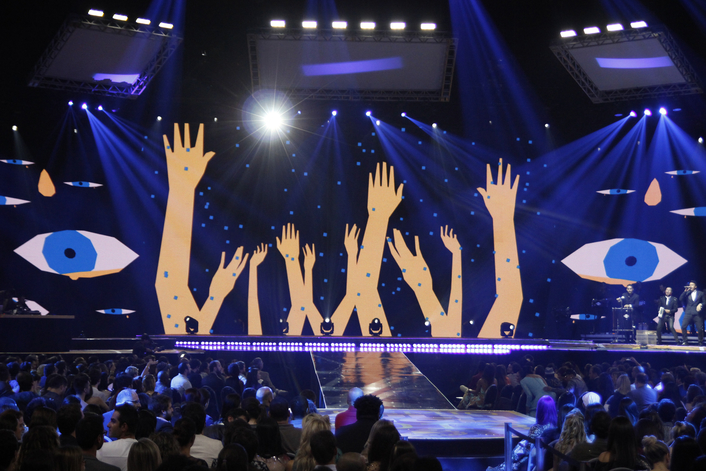 Lighting designer from Spectrun Design e Iluminaςão, Marcos Olivio, has a long history deploying SGM equipment in his projects. Enjoying a close relationship with SGM’s Brazilian distributor, L.B.O., Olivio always receives demos of newly launched SGM product. “We test the products on our projects in order for us to better understand what functionalities, efficiencies and cost benefits they bring to our company before we make the purchase”, he states.

Again for the award show the benefits were clear. Olivio intended the P-5 to outline the sports arena while also illuminating the audience; at the same time, the SixPacks were used throughout the arena and on stage to provide a high volume of lighting. Believing that he achieved his objective, Olivio explains: “In this particular case, I managed to get the best result, as these new devices are very efficient and bright as well as offering a full colour range”.

A GrandMA2 console was used to control the SGM LED wash light and blinder with preset programming conveying the virtual performance very accurately in reality.

Working with the SGM fixtures, Olivio observes that “the light output is nearly inversely proportional to the power consumption”, while other product benefits such as the innovation factor, IP rating, resistant material in construction and design; the quality of brightness and colours also came into play in deciding to use the P-5 and the SixPack.

“Lighting projection for TV is always a challenge. First I consider the importance of conveying the same feeling experienced by the live audience onto the screen. Secondly I have to create a nice environment and illuminate the scene in the best possible way. SGM products are very efficient in making this all come together”, states the light designer.

He continues, “I am very pleased with the new generation of LED products from SGM. Their output is much higher than I have seen with similar products. SGM has managed to make real progress in our industry”.

Now, the creative team of Spectrun Design e Iluminaςão is already onto new challenges, developing a project for a large football arena for the DVD of the great Brazilian singer Ivete Sangalo, and entrusting the SGM products to show their magic once again.