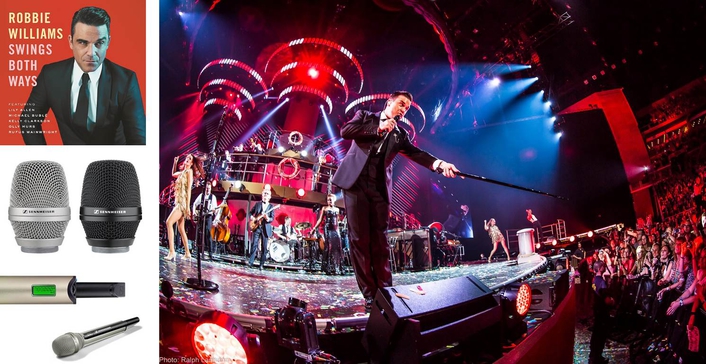 Robbie Williams spent much of April, May and June on tour throughout Europe promoting his latest album, Swings Both Ways, culminating in four nights at London’s O2 Arena. Taking care of musical genres from jazz to rock was a comprehensive package of Sennheiser microphones and in-ear monitors.

“There were a lot of challenges with the vocal microphones, because on this tour there is a great dynamic in the style of song - from solo ballads, through swing numbers to full on rock mode. This is a challenge for the mic, especially when Robbie is in front of the PA a lot of the time,” says Front of House engineer Simon Hodge.

While Simon and monitor engineer Pete McGlynn both really like the sound and rejection of the SKM 5200 / MD 5235 combination, Sennheiser UK’s Mark Saunders was keen to help them improve the sound even further.

“Mark produced a variation of the MD 5235 that has a slightly more manageable low end response as the proximity changes,” says Pete. “It proved to be hugely beneficial if Robbie gets right on the mic, without having to use extra compression or dynamic EQ. The result was a very natural sound.”

“The new version gave us an uncoloured, intelligible vocal sound even when being pushed hard in front if the PA,” adds Simon.

In monitor world, the production’s combination of a three-tiered stage, B stage and ego ramps meant that using any wedges or other onstage loudspeakers was impractical. In-ear monitoring was the only solution, but that brought its own challenges. Enter RF ‘guru’ George Hogan… 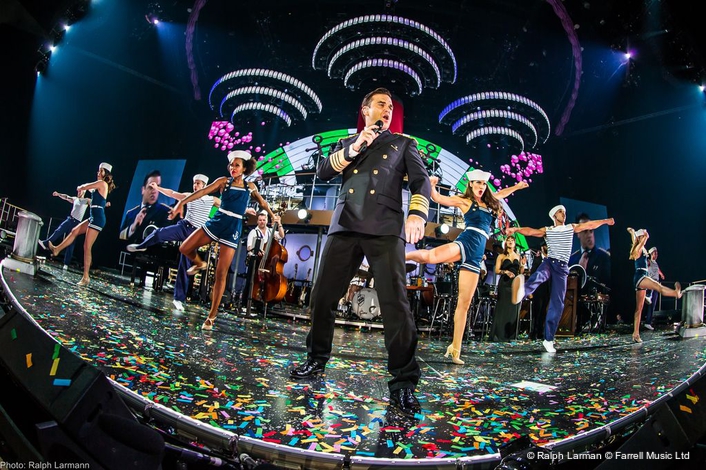 “As Robbie started under the stage, ran around the B stage, into the heart of the arena and across all three tiers, his IEM coverage was a project of its own,” says Pete. “Even though we had a 17 piece band, plus dancers, we managed to squeeze the in-ear monitoring into 22 channels, the main reason being the obvious limitations in available spectrum in some parts of Europe.

“As well as looking after the frequency management, George specified a distributed system of flown transmitter antennae for the band area, with Robbie’s antenna on the PA cable bridge. This enabled us to keep the transmitter power as low as possible, while still allowing the 2000 series to deliver an incredibly noise free system throughout the backstage and performance areas.”

Pete and Simon are also full of praise for Mark Saunders and the Sennheiser UK team who, as well as providing the modified MD 5235 mic capsules, were always on hand to provide as much assistance as was needed.

“Mark and his team were, as usual, very helpful and supportive, including providing an EM 3732/SKM 5200 command system, with an adapted battery compartment with a push button, enabling the user to have a switchable system,” Pete concludes. “This was invaluable during our rehearsal period, enabling separate communication to Robbie and the dancers.”