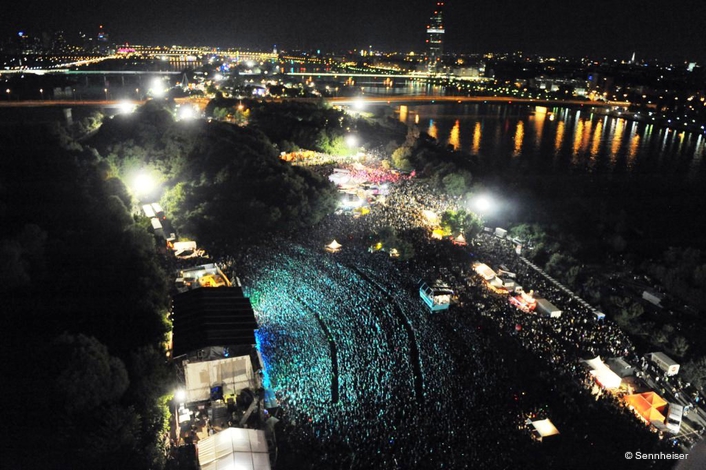 Three million visitors over three days: the Vienna Danube Island Festival (Wiener Donauinselfest) has again raised the bar with regard to music festivals. In addition to record crowds, the largest open air festival in Europe again presented a top class programme of acts this year.

Over the course of three sunny days and evenings from 25 – 27th June, the festival on the island situated between Empire Bridge (Reichsbrücke) and North Bridge (Nord­brücke) provided top sounds for all manner of music tastes. Sennheiser and its Austrian partner Grothusen AV were also part of the action: the audio specialists were responsible for equipping FM4-Planet.tt. island, one of the event’s major stages.

With HIM, Sunrise Avenue, Amy MacDonald, Billy Idol and Mylo, the 2010 edition of the Danube Island Festival again featured top international acts. As it has been for more than 20 years, the Radio FM4-Planet.tt. island, the event’s third largest location, was again a firm favourite. The alternative broadcaster FM4 has established a loyal audience well beyond the borders of Austria and, like the scene magazine Planet.tt, the broadcaster can pride itself on having discovered a number of new talents. 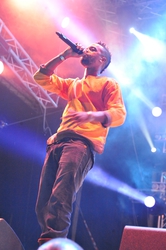 These two partners are the ideal choice to present interesting newcomers as well as alternative old hands to an extensive audience at the Danube Island Festival. In order to show the crowds that hip hop has taken a significant stride far to the east of the U.S. East Coast, the festival’s first day focused on local Austrian bands from this field of music such as Demolux, MAdoppelT, Ich bin Wien, SK Invitational featuring Texta and HSC (Hörspiel Crew). Some of the hot and happening hip hoppers really got the audiences going. The evening then saw the political rapper M-1 and stic.man presenting their mix-tape “Revolutionary But Gangsta Grillz” as Dead Prez. The Saturday and Sunday were dedicated to indie, alternative and electronic music. Top acts included Depeche Ambros, Cinematics, Stereo Total, Pendulum and Adam Greene.

Grothusen Audio Video Vertriebs Ges.m.b.H. was again responsible for producing the great audio at this stage. The experienced specialists from Vienna took care of the PA system and the microphone systems. “We were able to provide a complete audio solution and exceptional sound, which was much appreciated by the audiences,” comments Alexander Kränkl, Managing Director of Grothusen AV. The company made use of Kling & Freitag loudspeakers and Sennheiser microphones. 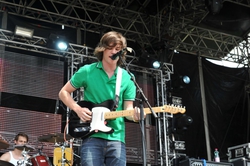 The latter were put together by Pierre Morant from the Sennheiser Global Relations Team: “We were very happy to work with Grothusen AV again this year. For the Danube Island Festival, we provided wireless microphone systems from the 2000 series and wired evolution microphones ,“ states Pierre Morant.

Already on day one of the festival it could be seen how important it is to use the right microphone. “Hip hoppers and DJs like to cup the back of the capsule with their hands. This calls for microphones that allow this without causing problems,” comments Manfred Prochazka, Grothusen AV’s key account manager for live audio, who supported the FOH and monitor engineers in selecting the microphones. “With the Sennheiser 935 capsule and the SKM 2000 hand-held transmitter, the directional characteristics remain almost the same and the quality remains high even in these conditions,” says Manfred Prochazka, who had eight wireless mics with him, all combined with EM 2050 dual channel receivers. The 2000 series’ switching bandwidth of 75 MHz allowed interference-free frequencies to be found even among the densely populated frequency spectrum at the festival. “I regularly scanned the entire band of frequencies with the Sennheiser Wireless Systems Manager software. Fortunately there was no interference or overlaps,” adds Prochazka.

The instrument sounds were picked up by evolution 900 series microphones. For instance, bass drums were miked with e 901 and e 902 models, and e 905 microphones were mounted on the snares. The e 904 and e 906 were used for percussion. “The e 906 gives a softer and warmer sound whereas the e 904 is more percussive and hard. This allowed us to individually tailor the desired sound for the different bands.” Sennheiser e 914s were used as overheads. 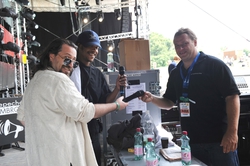 Another real classic on the equipment list was the Sennheiser MD 421-II. This microphone has shaped 50 years of music and radio history and is today considered a classic device for picking up sounds from drums and guitar amplifiers. Grothusen AV made use of the microphone for guitar amps. e 906s were also used for this purpose. “The e 906 is absolutely fantastic across the whole spectrum, not just right in the middle as is the case with most other microphones,” explains Prochazka with regard to his choice. “For some wind instruments we used the e 908 B – an ideal partner for such instruments with its lively and clear sound.” Freedom of movement was provided by the SK 2000 bodypack transmitter.

This year’s line-up was very well received by the audiences: “We had record crowds,” comments organizer Christian Schmid from Planet Music & Media GmbH. “During the night between Saturday and Sunday the Danube Island actually had to be closed for a while due to overcrowding. The great audio quality certainly contributed to the fact that the crowds loved the music so much. Each and every band sounded just perfect.”

The Sennheiser Group, with its headquarters in Wedemark near Hanover, Germany, is one of the world’s leading manufacturers of microphones, headphones and wireless transmission systems. The family-owned company, which was established in 1945, recorded sales of around €390 million in 2009. Sennheiser employs more than 2,100 people worldwide, and has manufacturing plants in Germany, Ireland and the USA. The company is represented worldwide by subsidiaries in France, Great Britain, Belgium, the Netherlands, Germany, Denmark (Nordic), Russia, Hong Kong, India, Singapore, Japan, China, Canada, Mexico and the USA, as well as by long-term trading partners in many other countries. Also part of the Sennheiser Group are Georg Neumann GmbH, Berlin (studio microphones and monitor loudspeakers), and the joint venture Sennheiser Communications A/S (headsets for PCs, offices and call centers).

Eurovision Song Contest enchanted by the sound of Sennheiser
Sennheiser Captures HIM
Sennheiser Fills the World Stage for Celtic Woman and P.S. 22