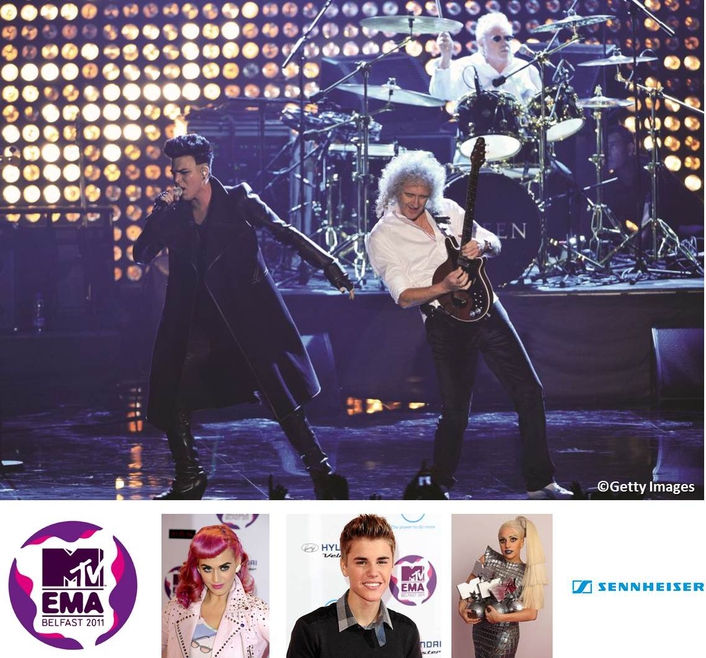 Singer Adam Lambert performs with Brian May and Queen onstage during the MTV Europe Music Awards 2011
Hosted by Selena Gomez and with a show stopping performance by Lady Gaga, who walked away with multiple awards, 6th November saw the great and the good of the contemporary music industry descend on Belfast’s Odyssey Arena for the 2011 MTV European Music Awards. Sennheiser radio equipment was in use by a number of the show’s performers. As in previous years, the live sound design for the show was by Derrick Zieba, with audio equipment for the performances supplied by Britannia Row Productions.

Actress and singer Selena Gomez used a ‘custom bling’ Sennheiser SKM 5200-II with a Neumann KK 105 S capsule for her duties as the show’s host; further SKM 5200-IIs and KK 105 S combinations were used by those presenting the awards, including David Hasselhoff, Hayden Panettiere and Jessie J.

“As with other events such as the Brit Awards, the RF spectrum of the MTV European Music Awards has become increasingly complex to manage, with the ever growing use of radio microphones, IEM systems and guitar packs,” says Derrick.

“It’s difficult enough to find clear, interference-free spectrum to satisfy artist demands, which can easily consist of 16 IEMs, eight guitar systems and several radio mics. To multiply that by seven and make the change over time between acts live-on-air a matter of a few minutes is a very bold challenge. Add to that, handheld radio mics for presenters and award winners in between the live performances – who could appear anywhere in the vast Odyssey Arena – and the challenge can become a nightmare!

“Robust, reliable RF equipment is a must and for that reason alone I would choose Sennheiser. However, I can proudly say that not only do they offer the best support from a radio systems supplier, but the best support of any in the pro audio business.”

“Mark Saunders and Andrew Lillywhite from Sennheiser UK have consistently supported my work on the bigger multi-artist shows for the past decade and once again they were there to offer much appreciated advice and practical support to my superb RF Supervisor Barry Macleod. They were key to ensuring that the show was trouble-free. You could not ask for a better service.”

About Sennheiser
The Sennheiser Group, with its headquarters in Wedemark near Hanover, Germany, is one of the world’s leading manufacturers of microphones, headphones and wireless transmission systems. The family-owned company, which was established in 1945, recorded sales of around €468 million in 2010. Sennheiser employs more than 2,100 people worldwide, and has manufacturing plants in Germany, Ireland and the USA. The company is represented worldwide by subsidiaries in France, Great Britain, Belgium, the Netherlands, Germany, Denmark (Nordic), Russia, Hong Kong, India, Singapore, Japan, China, Canada, Mexico and the USA, as well as by long-term trading partners in many other countries. Also part of the Sennheiser Group are Georg Neumann GmbH, Berlin (studio microphones and monitor loudspeakers), and the joint venture Sennheiser Communications A/S (headsets for PCs, offices and call centres).