Sennheiser Fills the World Stage for Celtic Woman and P.S. 22 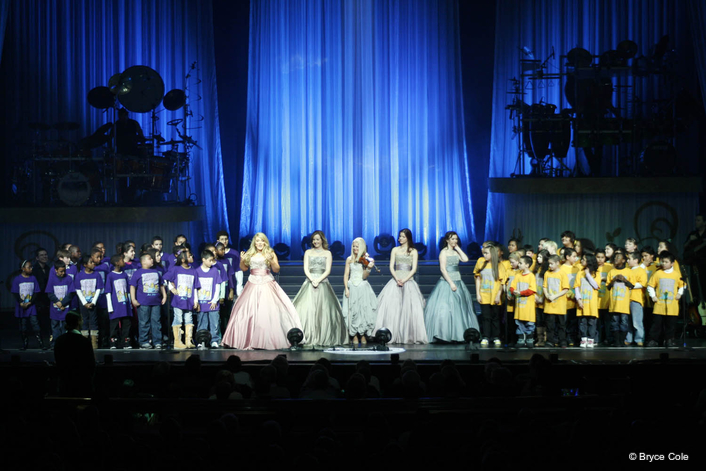 Celtic Woman performs with New York’s P.S. 22 Chorus at Radio City Music Hall, New York, NY.
A unique act in the massive work of contemporary music, Celtic Woman merges modern elements with time-honored Celtic tunes through the voices of five superb female soloists backed by a full band and an eight-member choir. Since its formation in 2004, the group has sold over fifty million albums and has played to sold-out arenas throughout the world. The current 75+ city tour, “Songs From the Heart” supports the latest release of the same name and made its way in late February through New York City. The group invited the Internet phenomenon P.S. 22 Chorus to share the stage at Radio City Music Hall.

Under the direction of Gregg Breinberg, the P.S. 22 Chorus is a uniquely talented elementary school chorus from Staten Island, New York, whose amazing performances have “gone viral” on YouTube.com, inspiring over thirteen million views. In addition to the large amount of Sennheiser wireless and wired microphones and personal monitors that Celtic Woman normally travels with, FOH engineer Wayne Pauley needed additional Sennheiser e 935s to mic the P.S. 22 Chorus, which Sennheiser delivered with almost no notice.

Celtic Woman’s stage show is elaborate, and Pauley relies on an extraordinary number of Sennheiser units to make it happen night after night (Celtic Woman plays an average of 150 shows a year!). “At any given time, we could have up to nineteen people on stage with Sennheiser 2000 Series wireless personal monitors, giving us thirty-eight RF mixes for monitors alone,” said Pauley. “With a few exceptions, everyone is singing into headworn mics connecting to Sennheiser SK 5212 body-packs that pair with Sennheiser EM 3732 receivers. We use Sennheiser’s 5000 Series antennas and 3000 Series splitters and combiners, with Sennheiser NET 1 units to handle monitoring and remote control for all wireless channels.” 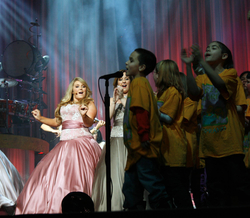 “Of course, I had never worked with the P.S. 22 Chorus before,” said Pauley. “And you never really know what you’re going to get until you hear performers in person. So it was critical that whatever went into the mics sounded great coming out. I needed a great-sounding, versatile mic, and the Sennheiser e 935 fit that description. It’s consistently fantastic and forgiving.”

Pauley gave Breinberg, the chorus’ conductor, a Sennheiser EK 2000 IEM wireless personal monitor so he could hear clearly what the audience would hear. Eight Sennheiser e 935 mics delivered the final output for the 60-some fifth-graders. Indeed, when the big day arrived, Pauley had only ninety minutes with the P.S. 22 Chorus before doors opened! “There was no room for experimentation,” said Pauley. “It was either going to work, or it wasn’t.” He continued, “Since we tour the world, I primarily deal with the Sennheiser Global Relations team, which has been fabulous. Squeezing the number of wireless channels that we do, into as narrow a band as we often have, wouldn’t be possible with any other manufacturer, and I’m happy to have the Sennheiser team to help us navigate the RF regulations of the various countries where we perform. For this particular show, the opportunity to have the P.S. 22 Chorus was a bit last minute, and I wouldn’t have agreed to it if I didn’t have confidence in the Sennheiser team to get us what we needed in time. We would have had the gear with a day to spare, but the overnight shipping company messed up and everything arrived literally five minutes into soundcheck. I had an assistant standing at the stage door looking for the truck! Of course, everything worked perfectly right out of the box and so the show could go on without compromising anything.”

Everyone, including the kids, Celtic Woman, and the lucky audience, loved the show. The P.S. 22 Chorus joined Celtic Woman for two of the group’s most beloved songs, “You Raise Me Up” and “Spanish Lady.” For Pauley, the experience also reenergized him, underscoring the beauty and impact of the work he does for Celtic Woman. “We do a tremendous number of shows every year,” he said, “and it’s certainly possible to start to take it for granted. But the joy of having these kids perform with us really puts it in perspective. They’ll never forget this! How many other kids can say they played at Radio City Music Hall? Playing with the P.S. 22 Chorus has been the highlight of the tour so far.”