Sennheiser Digital 9000 Captures the Sounds and Emotions of “14-18”

Neumann and Sennheiser digital microphones used for the recording of the music score
The Benelux countries are rapidly making a name for themselves as a hotbed of musicals produced on a giant scale. As “Soldaat van Oranje” continues to wow Dutch audiences in a former aircraft hangar, a new production, “14-18”, is now doing the same in a similarly vast Belgian venue – De Nekkerhal in Mechelen. The production brings the grim reality of Flanders fields to life with an incredible level of intensity and immediacy for the audience, a spectacle helped greatly by Sennheiser’s flagship Digital 9000 wireless microphone system.

Set in Western Flanders during the Great War, 14-18 traces the fortunes of three young soldiers caught up in one of the most ruthless and bloody struggles in European history.

This latest production from global entertainment company Studio 100, Frank Van Laecke, Dirk Brossé and Allard Blom takes place in a venue measuring 300m long by 60m wide. In addition to the scale, everything about this production is innovative – from the seating to the set, both of which move, to the use of the most cutting edge audio technology. Here, a starring role is played by Sennheiser’s Digital 9000 Series microphone system. 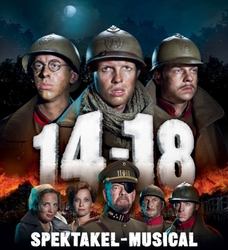 Audio in the live show
The audio system was designed by Mark Luyckx and Guido Olischlager, who is also front-of-house and monitor engineer for the show. They devised a system that seamlessly delivers sound to the 1900-strong audience that sits on a large mobile bleacher, which moves backwards and forwards to create a real sense of immersion in the production. The story is complex and frequently moves between timeframes, so it is highly dependent on clarity, making Guido’s choice of the Digital 9000, along with associated antennas and antenna distribution combiners custom-designed by Sennheiser Benelux, integral to the production’s success.

“I attended the 9000 Series launch at the end of 2012 and was very impressed that it doesn’t compress the audio in any way,” he says. “With this production we wanted the signal chain to be as clean as possible, with no A/D and D/A conversion to compromise the audio quality. Basically it is digital from the Sennheiser vocal microphones right through to the system amplifiers.”

With a production of this size that features a lot of action, including multiple actors running around, moving objects and clapping, complex moving scenery, the moving bleachers and even a horse on stage, there was the potential for the show’s 32 microphones to pick up a lot of unwanted noise. But the Sennheiser 9000 series means that the system delivers consistently clear, high quality audio. 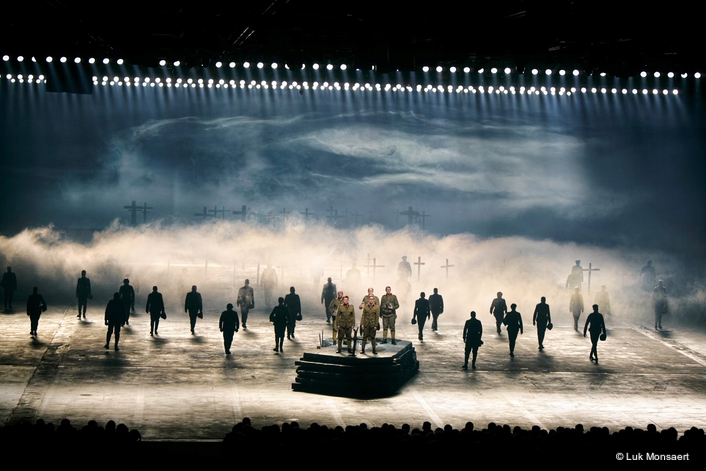 The musical brings the tragedy of the Great War to life

“If the audio is compressed, all the other sounds going on are compressed and can come down the microphone as loud as the voice you want to amplify. But the 9000 Series’ lack of compression means it delivers exceptional separation between the sounds you want and those you don’t,” says Guido. 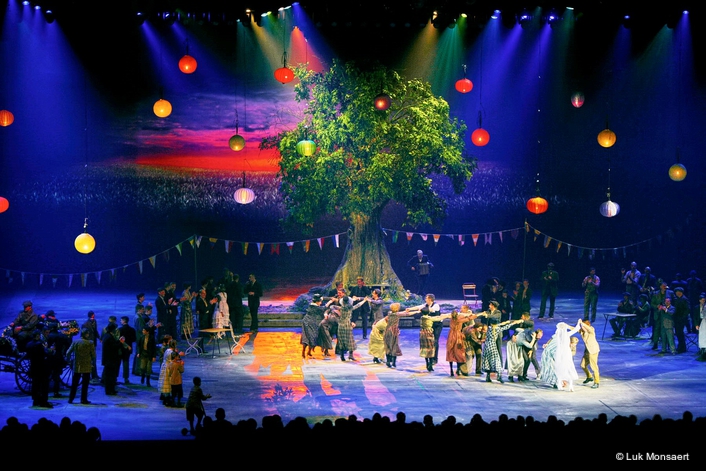 “It’s a very good system. I’ve done a couple of musicals with other brands and there was always trouble with the RF, but this has been great. We are doing ten shows a week and have had no drop-outs, no RF problems, no broken beltpacks, no broken mics – nothing. And the support from Sennheiser Benelux has been invaluable.” 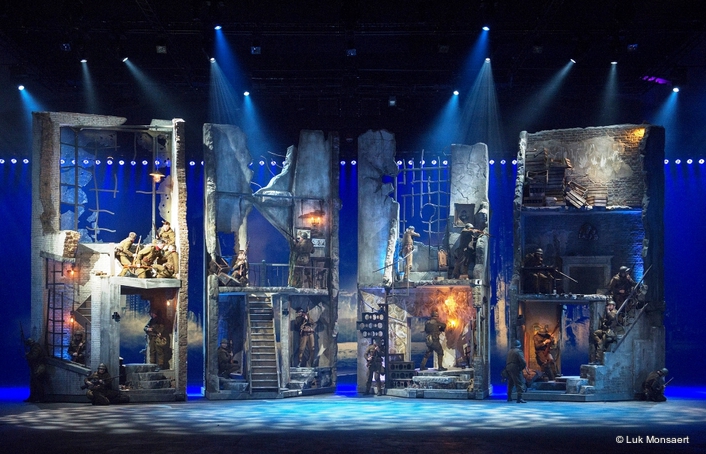 In order to cover the large stage area with wireless, Sennheiser Benelux’ technical team designed and developed a unique antenna distribution system. “In total, we use two directional and six omni-directional antennas. Thanks to this custom-made distribution system, we’ve really played it ‘safe’ and have an optimally reliable set-up,” says Christophe van den Berghe, Sales & Marketing Director at Sennheiser Benelux. “This reliability was needed to anticipate all the required décor setups of the movable elements, which are massive metal reflectors in the large staging area. Knowing that Mechelen is situated in an area where RF traffic is very dense – including the production’s own requirements – we configured the system in such a way that we can switch in a broad spectrum, allowing us to change frequencies if needed. The Sennheiser Wireless Systems Manager (WSM) used during the production is also MAC-compatible and takes on full control of all Sennheiser wireless series.” 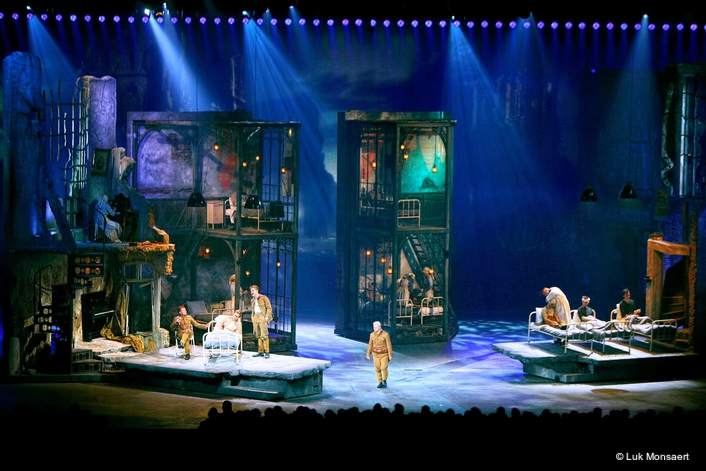 Pre-recorded material
Originally, there were plans to have a full band playing live in an orchestra pit but when the stage design evolved to include a host of moving elements, this idea was discarded. Instead, the renowned Galaxy Studios in Belgium was tasked with the pre-recording of both the orchestra and the choir. The 70-piece Royal Flemish Philharmonic was conducted by Dirk Brossé himself. Galaxy Studios’ Patrick Lemmens, tonmeister and chief recording engineer, elected to use this opportunity for A/B testing a completely analogue set-up from their equipment and a 100% digital microphone set-up supplied by Sennheiser Benelux for this purpose. 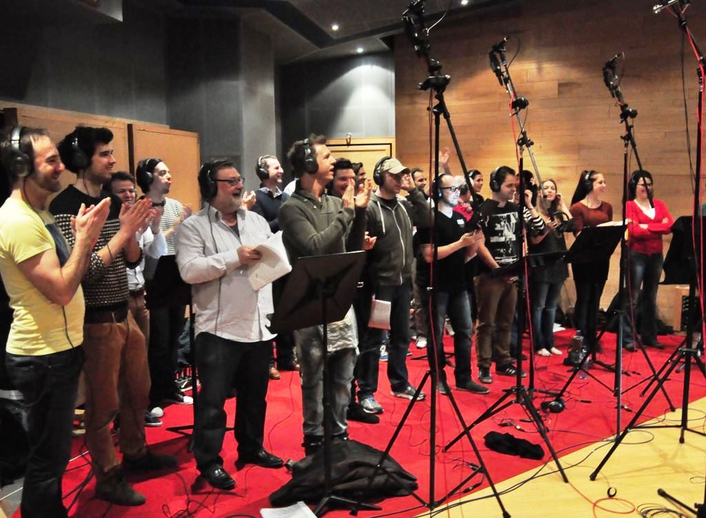 As main microphones, he used three Neumann M 150s (analogue) and three Neumann D-01s (digital) in a Decca tree set-up. Neumann KM 133 Ds and KM 183 Ds were used to add surround and height information. The spot microphones included various models; on the digital side, these included KM 133 Ds for violins, viola and celli, and KM 184 Ds for the piano, timpani, woodwind overheads, and for the brass section (horns, trumpets, trombones, tuba). Sennheiser MKH 8040s were used as spot microphones for the flute, oboe, clarinet and bassoon. The percussion was picked up by KM 143 Ds, an MKH 8040, KM 185 Ds and KM 145 Ds. 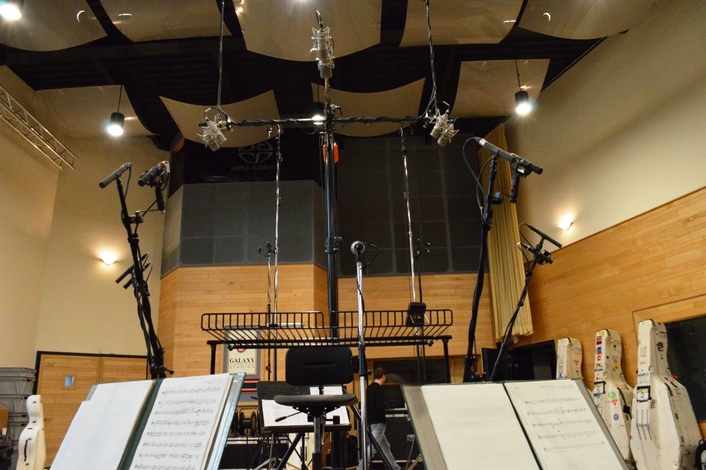 The orchestra for 14-18 was recorded in the Galaxy Studios. As main microphones, the engineers opted for a Decca tree set-up

The choir was recorded in a separate room, miked by Neumann KM 133 Ds and KM 184 Ds, and was fed the orchestra’s audio signal via Sennheiser HD6 MIX monitoring headphones. 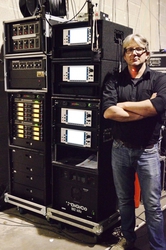 Patrick Lemmens commented: “Having recorded the symphonic orchestra, choir and vocals for the 14-18 soundtrack simultaneously with more than 140 analogue and digital microphones, I was incredibly curious as to whether the digital mics could stand up against the warm sound of the analogue ones. I knew the advantages of digital to be flexibility and low noise – crucial for live situations but it’s less of an issue in a recording studio. All that matters here is sound quality. I was therefore really stunned by the excellent sonic result of the mix that was made exclusively with the 71 digital microphones!

”With excellent reviews and around 220,000 seats sold so far, 14-18 is undoubtedly a landmark event amongst the many that are marking the 100th anniversary of the outbreak of the Great War. The musical’s run has just been extended until 21 September.