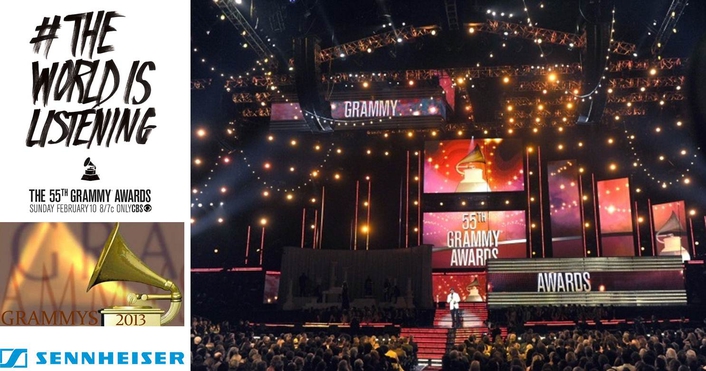 .
For world-class recording artists including Bruno Mars, Sting, Zac Brown, Miranda Lambert, Alicia Keys and Ed Sheeran, Sennheiser was the microphone and wireless system of choice for the 55th annual Grammy Awards event, held at the Staples Center in downtown Los Angeles on February 10. The evening’s telecast, hosted for a second time by LL Cool J, drew 28.1 million viewers and showcased over 25 spectacular performances by a diverse range of artists.

As in prior years, the artist dedications were among the most memorable moments of the evening, and this year included moving tributes to Bob Marley, Levon Helm, Dave Brubeck and others. Bruno Mars led the tribute to Bob Marley before ushering Sting, Rihanna, Damian Marley and Ziggy Marley to the stage for performances of “Locked Out of Heaven”, “Walking on the Moon”, and “Could You Be Loved”. Bruno Mars sang through a Sennheiser SKM 2000 transmitter, coupled with an MMD 945-1 super-cardioid capsule. Sting, meanwhile, delivered a powerful, full-range vocal performance through a Sennheiser SKM 5200-II transmitter with a Neumann KK 105 S super-cardioid capsule. 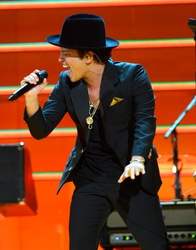 “Putting Bruno on the SKM 2000 transmitter and MMD 945-1 capsule combination was a choice between me and Front of House,” explains James Berry, monitor engineer for Bruno Mars. “We did a shootout with a ton of mics and this was definitely the best choice for Bruno. This combination really made his vocal sound fantastic both for his own IEMs and for Front of House.” Berry says he is running roughly 30 channels of Sennheiser wireless, for microphones as well as IEMs: “The 2000 series IEMs are rock solid and they sound great. I’ve been using them for many years now and it’s my go-to.”

Perhaps the most emotional tribute of the evening was to Levon Helm, who passed away in April of 2012. An all-star cast consisting of Zac Brown, T Bone Burnett, Elton John, Mavis Staples, Mumford & Sons and Brittany Howard of Alabama Shakes performed an emotional rendition of “The Weight” with Zac Brown leading off, singing through a Sennheiser SKM 5200-II transmitter and MD 5235 capsule.

Earlier in the evening, audiences were treated to shimmering duet renditions of “Over You” and “Home” by Miranda Lambert and Dierks Bentley, with Lambert singing through her signature custom pink-fashioned Sennheiser SKM 2000 handheld and MMD 935-1 capsule. “Microphone choice is a team call between Jason [Macalik, FOH for Miranda Lambert] and me,” says Chris Newsom, monitor engineer for Miranda Lambert. “You choose whatever microphone best complements the artist’s voice, and the combination of the SKM 2000 and MMD 935-1 works fantastic for us. Miranda’s voice sounds really smooth, and that’s exactly what we are looking for.” Newsom adds that his team relies 100 percent on Sennheiser for both handheld transmitters and IEMs, with 12 stereo mixes of ew 300 G3 IEMs for in-ear monitoring alongside EM 2050 receivers and six channels of SKM 2000 transmitters – each with MMD 935-1 capsules.

John Harris has been music mixer at the Grammys for 20 years and says that attaining outstanding audio has always been the focus. “This is the only show where all my clients are music professionals, so there is nothing more important than the sound,” he says. “For both Bruno’s and Miranda’s performances, the sound of the mic jumped out at me and made me look up,” he recalls. “In both cases, the mics [Sennheiser SKM 2000 with MMD 945-1 capsules] were really well matched to the performers and were ideal for the circumstances.”

Throughout the entire performance, Dave Bellamy of Burbank, CA-based Soundtronics, who served as RF Coordinator and has no less than 15 Grammy events under his belt, relied on Sennheiser for wireless systems. “We used 18 channels of Sennheiser RF for the show, all top-of-the-line EM 3732-II receivers,” he says. “We have been very happy with it and it has been solid and reliable – especially as we have less and less spectrum and more RF devices to work with than ever before.” Bellamy’s firm was responsible for the antenna system and seamless coordination of all the RF frequencies for the show.

Many Sennheiser microphones were also featured across a variety of backline instruments throughout the show. For example, no less than 20 Sennheiser e 935s were used for background vocals, 30 Sennheiser e 602 microphones for floor toms and kick drums, 20 e 904s for rack toms and ten e 906s on various guitar cabinets. Music mixer John Harris is a fan of the e 602 mic in particular: “The e 602 design is fantastic,” he elaborates. “You can put it on a drum and it already does what I was going to do to it – it is great at impact, especially at the bottom and top end.”

Harris says that he continues to receive impeccable support from Sennheiser, which is invaluable at a time when technology is moving so fast: “Sennheiser looks after their products well and having someone on the ground like their artist rep Tim Moore is spectacular. I get the feeling that Sennheiser has a real pulse on their products and that the company is moving forward all the time.”