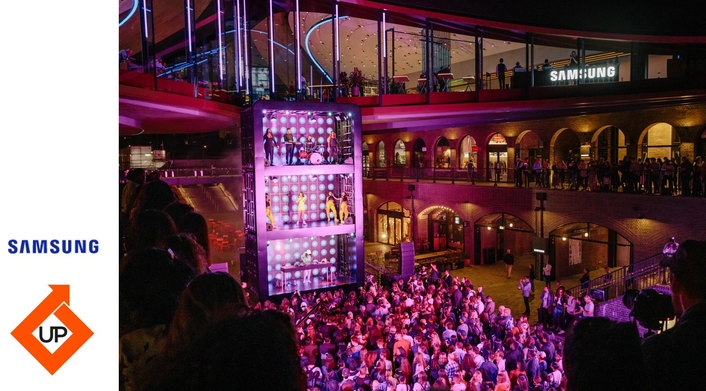 Responding to research that shows 79% of smartphone users prefer portrait videos - a trend driven by the upright configuration of 'Stories' on Instagram, Facebook and Snapchat - Samsung staged the spectacular vertical gig with R&B artist Mabel performing tracks from her smash-hit back catalogue.

The multitiered performance space - located at the famous ‘kissing point’ of London’s Coal Drops Yard - was erected as part of the launch of Samsung’s new multi-sensory experience which is set to “inspire people to push their limits, discover and learn.” 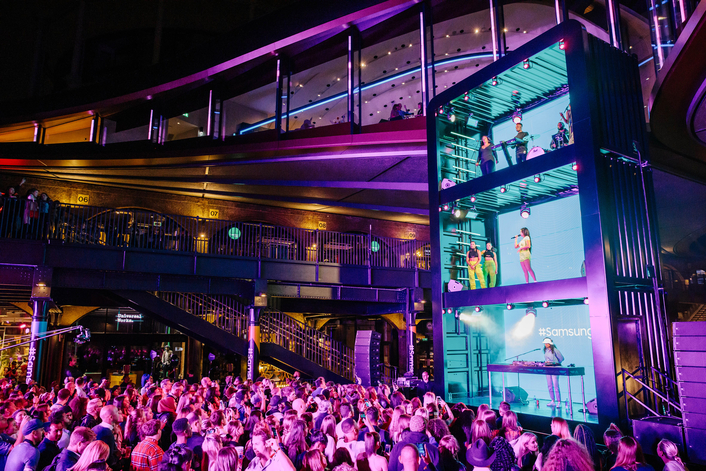 The structure itself was fabricated by Star Live using three shipping containers to create a 9:16 format. The finished stage was an impressive 9.1m tall, showing 3 stories of tech and performance space to the 2,000-capacity crowd. UP provided the vertical 4.5m wide x 7.5m high portrait Leyard CLM6 LED screen with a custom rigging solution and a disguise GX2 media server playback package.

UP’s Roly Oliver stated: “The genius thing about this gig is its simplicity. It’s bold yet not particularly complex, and it seems almost strange that it’s never been done before. Video is a blank canvas and as we work in a consumer-led market, the ticket-buying public has made it clear that they want to view the world in portrait. I think we’ll be seeing this a lot more in the future.”

Henry Scotland said: “We hadn’t worked with UP before, so were keen to give them a shot at slotting into a fairly ambitious bespoke design. The team worked super hard alongside Star Live to devise a plan which maximised the screen real estate in each aperture, without compromising the performance space or the impact of the product; having Coldplay’s live Video Director [Ben Farrey] running the server was a bonus. The final look delivered beyond expectation, and we look forward to posing the next challenge.”