Safely On The Run with Beyoncé & Jay-Z 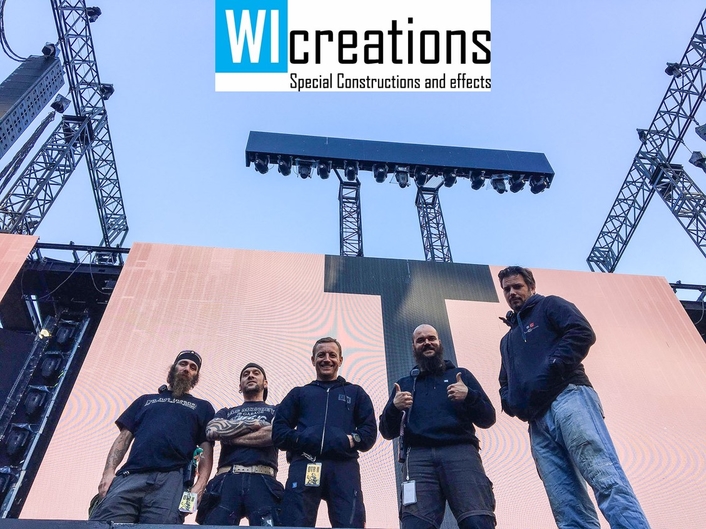 Entertainment engineering specialist WIcreations was asked to work on two specialist elements – a moving / tracking video wall and a ‘Star Lift’ – for Jay-Z and Beyoncé’s “On The Run II” (OTR II) stadium tour, part of an epic and spectacular set design concept designed by Stufish.

In addition to all the hardware, software and bespoke engineering elements, on the administrative front, WIcreations delivered a full scenic motion risk assessment to the tour’s management, together with machinery technical files and full user manuals covering the entire system.
“As automation gets increasingly important in entertainment applications, so safety is THE most important aspect to watch!” underlines WI’s owner and founder Hans Willems, who also project managed all the automation requirements.

WIcreations provided this documentation in accordance with EC Machinery Directives 2006/42/EC and DIN 56950-1:2012-05.
Although technically outside the scope of the machinery directive - as it was intended to move performers - to increase its trustworthiness, the Star Lift was also assessed by applying the same rigorous standards as used for the video wall tracking system.

The complete documentation set was provided by BLUMANO and included User Manuals, a Risk Assessment, DGUV-17 (BGV-C1) system approval for Germany, D.lgs. 81/08 Allegato V certification for Italy and a StageDB.com technical documentation bundle including all the Inspections Certificates and Declarations of Conformity for each piece of machinery.
The process entailed compiling documentation based on detailed machinery inspections, therefore ensuring the safety and compliance of the installation to the highest industry standards.

WI’s involvement followed a successful collaboration working for the same production team on Beyoncé’s 2016 “Formation” world tour where their engineering expertise was called on to move the massive ‘Monolith’ set piece.
OTR II completed a European section before moving to the US for the rest of the summer and into the early fall.

It also saw the touring debut of WI’s brand-new proprietary MCA automation control system used to control both the lift and a series of video panels which moved around an oval shaped track. This was operated and run on the tour by Sam Melotte, leading an automation crew of four.
Upstage a large structural ‘performer wall’ was a major part of the StageCo constructed stage set, offering a series of integrated boxed spaces with various performers inside that were revealed and concealed by a large 13 metre high video wall just downstage.

The video wall was made up of 12 different shaped and sized sections, running on a complete oval shaped WI track along the top, and a floor track embedded in the scaffolding floor. By these sections shifting into different positions along the track, the whole stage architecture changed.
The designer’s mission was to start with a big screen and from that create a large opening to show the substantial performer wall behind.

So … Hans came up with the idea of tracking the video around the stage and using the video ‘space-frame’ system as the structure to stabilize the screen in high winds.
In this case, the screen was very transparent - for cool through-lighting effects - and constructing it in this way minimised the amount of pieces required to assemble / de-rig making load-ins and outs extremely fast!

“The challenging part was starting from a standard Space-Frame video system” explained Hans, from which they then had to design a special rigging system to assemble the video screens and then make the transfer of the screens to the tracking dollies - in the air - easy and safe.
Utilising variable speed hoists and the new WIcreations’ MCA-pad control, first the video crew build the screens, then the WI automation crew took over on the MCA desk … to make the safe transition from the screen space frames where the LED sections were assembled ... to the tracking dollies.

Constructing the screen with the variable speed hoist system instead of utilizing regular rigging hoists is a process that proved exceptionally smooth and safe … and with no damage being incurred by the LEDs in each module. This was also a BIG time saver on the tour.
Each column of screen ran on the standard WI tracking dolly system, however these were fitted with a hydraulic balance-system to even the screens out - to the eye - as they moved along their tracks.

This ensured that the movement and shaping could be infinitely varied, and the video screens could also all be run together as one complete continuous ‘flat’ video surface for selected parts of the show.
To make the whole system work and deliver in a short lead-time, it was vital for WI, StageCo and PRG Projects to collaborate closely, and having access to WI’s large automation rental stock also helped everything meet the deadlines.

The artist lift – in which the two stars made their dramatic stage entrance, and also used several other times throughout the set – ran on I-beam vertical tracking attached to the performer wall as part of the structure.
Boogie wheel pulleys on steel wires were connected to the cradle of the lift and to two double-chained 2500Kg vari-speed hoists were located the other side of the wall to move the cradle up and down safely and smoothly. The double chained hoists gave perfect synchronisation to guarantee that the platform always stayed flat!

The lift was controlled by the same WI MCA system operated by Sam.
On get-ins and outs, for practicality, the automation was divided up, with two automation desks and sets of WI racks stage left and right, which were then linked for the show.
Sam was joined on the road by a fabulous WI crew of Stefan “Xumi” Schumacher, Miroslav Kusik, Robert “Robo” Vrbjan and Kyle Smith.