The distance from stage to FOH position measured 30 metres and to the back of the audience 100 metres, with the sound system coping effortlessly.

Then four days later in the Kwang Wha Moon Plaza, in the heart of downtown, veteran Korean singer Lee Seung-Chul presented a showcase to promote his 11th album, with around 5,000 fans turning out for the free concert — the first time an individual performer had staged such an event.

A repertoire of characteristic rock ballads and modern pop songs was performed through two hangs of seven MLA elements and an MLD Downfill enclosure each side, with eight MLX providing the low frequency extension in two stacks of four. 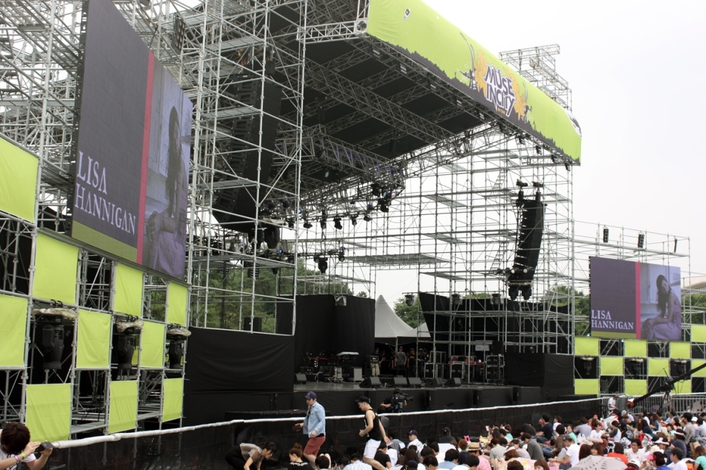 The decision to purchase a 36-element MLA system had been a no-brainer, states Rui Sound CEO Kwak Ho-Jae. “We decided immediately, and still strongly believe that MLA will remain at the top of preferred systems among existing line arrays in the Korean touring market, which is much more fashion-conscious and trendy than other sound markets.”

By September last year, Rui Sound had also installed its first MLA Compact in South Korea — with a System 24 at the Lotte Card Art Center in Seoul — which attracted both local touring companies and theatre technicians. The company continues to provide exclusive technical support and advice to this venue.

But in terms of touring they are maintaining a policy to promote MLA for local concert tours “as we felt this would have much greater power and influence than one off demos,” says Kwak Ho-Jae.  As the sound production company for Lee Seung-Chul they have been consistently using the system with both him and other famous Korean singers.

Of MLA’s attributes, the Rui Sound CEO adds, “Above all, MLA’s Multi-cellular principle enables us to control each drive independently and configure audience areas easily, irrespective of irregular shaped venues. In addition, the U-NET control system and the convenience of a powered system, simplifies the work of the sound engineer, leading to valuable time-saving at venues.

“Based on such experience with previous high value line arrays, we have now placed all our commitment behind MLA. We are ready to move forward with our strategy to build on the success on MLA/MLA Compact in the local market and continue to raise the whole brand image of Martin Audio — not only with MLA, but hopefully other systems as well.”