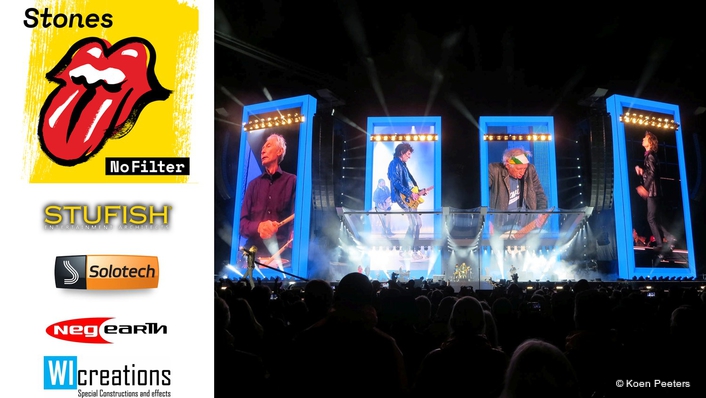 The No Filter tour plays 9 European countries, ending on October 25 in Paris

Soon after the first informative chat with Ray Winkler from Stufish, explaining the key design points, Wicreations was approached by staging and steel specialist StageCo and asked to develop and fabricate two cantilevered roofs – two complete, steel, tower and roof systems are being leapfrogged around Europe for the tour.

This led to them being asked by the tour’s production manager Dale “Opie” Skjerseth to assist in the other areas of designing rigging for the LED screens on the four towers and building the onstage technical areas. 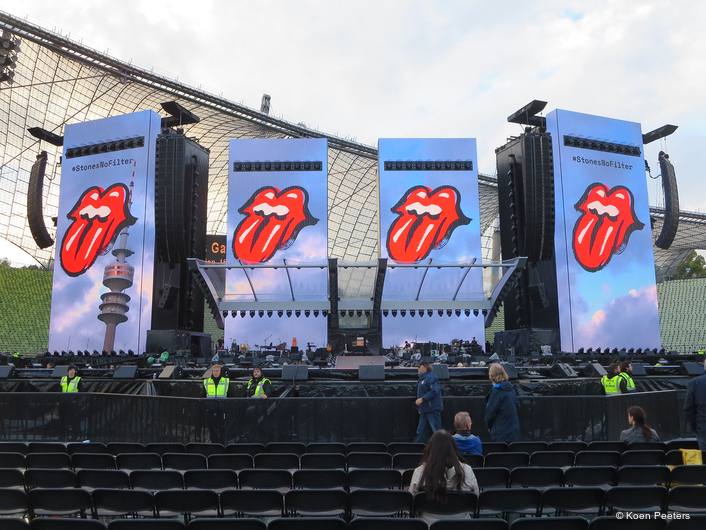 A key requirement for the stage roofing system by Ray Winkler and his team at Stufish was that everything had to look slick and streamlined and industrially super-chic. No raw metalwork was to be seen.

The clear-skinned roof was also required to have a full and efficient drainage system for the outdoor shows … in case of rain.

WI worked with its regular suppliers from their Heist-op-den-Berg, Belgium HQ, and the four elegantly curved 12 metre long steel roof beams each break down into two sections.

The lights travel in purpose-built beams designed by WI, complete with underside cladding, and each is pulled into place using four 250Kg hoists rigged inside the roof and out of sight once the operation is complete, with the fixtures’ bodies neatly protruding from the roof beam.

On the downstage / front edge, compression tubes brace the roof beams and keep them apart, and these are fitted with 14 x MAC Auras mounted via quick attachment plates and cable hooks to manage the wires expediently.

The transparent roof skins provide the requested rain protection and flow any collected water into the gutter trusses from where it is expelled through a bespoke pipe-and-hose system.

The roof is interconnected to the black steel superstructure of the two central video towers (out of four) – see below. 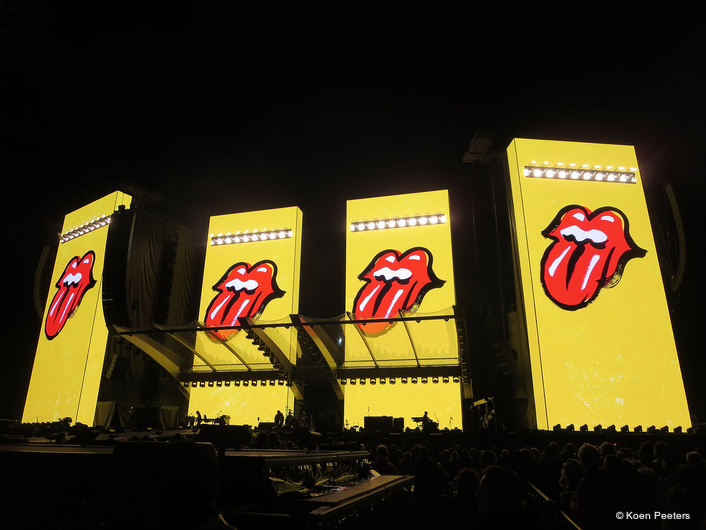 For the eight indoor shows on the itinerary, the cantilevered roof will be flown from the venues, so it will still be the heart of the performance space, and the construction also had to take this into consideration.

WI devised a method for rigging and securing four impressive 20 metre high by 9 metre wide LED video screens to the front of four large onstage towers which are a major part of the stage aesthetic.

The screen rigging system is devised so any wind loading experienced by the screens is transferred to the ‘black steel’ support towers behind, ensuring the environment stays completely safe.

A custom top truss was designed and built by WI for each tower, and the screens are hung on this from integral truss brackets that retract for transportation. An integrated load equalizing system compensates for any truss deflections and ensures that the tension on all video columns is equally divided.

Below the top video trusses are four wind bracing trusses spaced out down the tower, all of which roll into vertical guiding beams that are attached to both sides of the black steel superstructure, so any wind loading stress goes directly in to the black steel.

A good two metres below the top of the LED screens is an 8 metre wide gap to accommodate a row of nine Robe BMFL Spot moving lights, each accompanied by 4 single cell blinders, protected from the elements by a transparent rain hat. 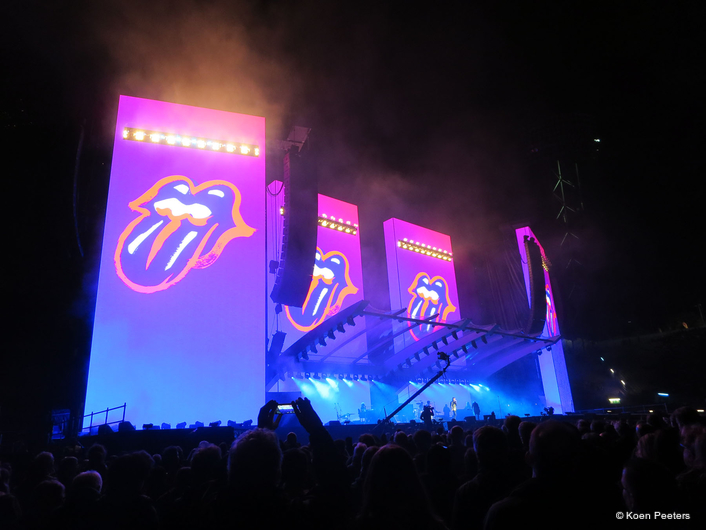 An additional little brain teaser was that Patrick (Woodroffe) requested the BMFLs were rigged at 90 degrees to their standard horizontal orientation, so they poked nicely through the slot … all adding to the challenge of making it work structurally.

Stufish sent detailed architectural drawings to WIcreations to work from for all of this, and from there … they made all the technical magic happen!

The four video screens are pulled up the tower via two 2.5 tonne Liftket motion control hoists, double reeved for a 5 tonne capacity, two per tower – 8 in total – which are connected to the black steel base of the towers, sitting on the upstage edge.

Onstage, two rolling sheds - stage left and stage right - are built from modular decks with heavy duty castors – to offer size variation – complete with detachable one-directional mesh fronts allowing a clear view out across the stage and an opaque view in from the stage so they blend into the blackout.

These are 6 metres long by 2.5 wide in the largest format and can be broken down in 2 x 2.5 metre sections to accommodate variable stage spaces they might encounter on the indoor shows.

They are being used to house the monitor position on stage left side and the band’s entourage on stage right side. 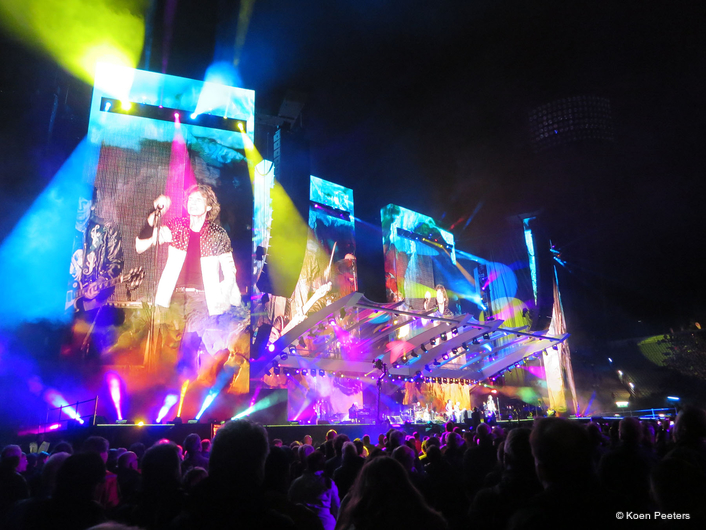 WI designed and engineered all hardware from a touring perspective, with quick and efficient deployment at each gig on any possible site in mind, using bespoke dollies into which all equipment packs down for travelling. The company is well known for this characteristically practical approach.

The crucial stipulation from Stufish that the steelwork and mechanical apparatus was hidden has resulted in a clean modern look juxtaposed with some hi-impact, powerful production structures, all part of the superlative production which rocked the first gig in Festwiese am Stadtpark, Hamburg.

Koen Peeters has worked on previous Rolling Stones Tours in 1998, 2002 and 2005, and comments, “It’s great to be back working with the band and an amazing creative and technical team. We have really enjoyed the challenges and the collaboration, and I think the end results are something of which we can all be proud”. 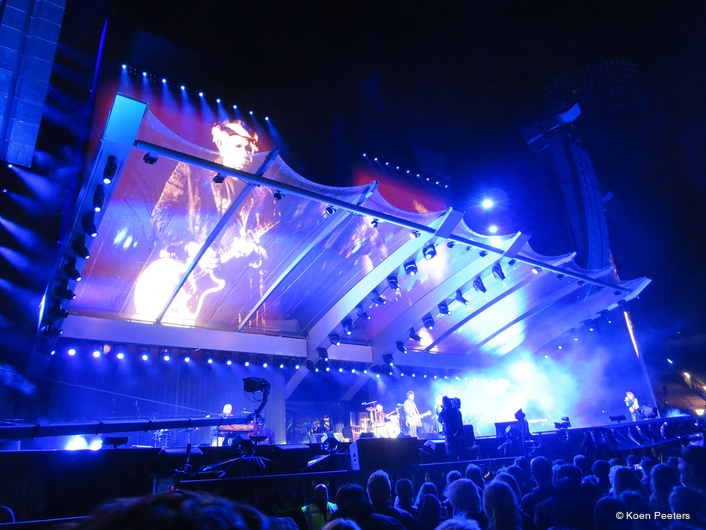 The video content has been produced by Sam Pattinson of Treatment Studios, the IMAG mix is being cut by camera director Nick Keiser and the video kit is supplied by Montreal based Solotech. Neg Earth from London are delivering the lighting and rigging equipment. Jeremy Lloyd from Wonderworks undertook technical co-ordination during the development and pre-production period, and everything is being overseen on the road by Opie.

The No Filter tour plays 9 European countries, ending on October 25 in Paris.