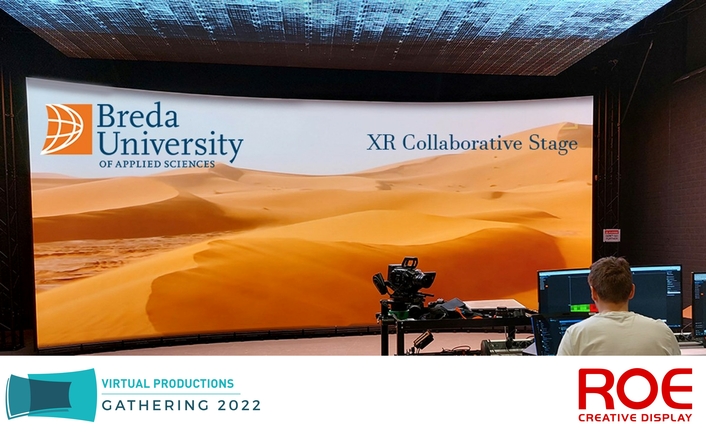 Breda University of Applied Sciences will host the 2022 edition of the Virtual Productions Gathering. This conference highlights the use of games technology for film production, and some world-renowned speakers will share their knowledge and experience. ROE Visual will show the qualities of LED in virtual production.

Following its first edition in 2021, Breda University of Applied Sciences will host this years’ edition of the Virtual Productions Gathering on Thursday, 14 April 2022 in Breda, the Netherlands. The conference will be combined with the launch of their new XR Stage for which ROE Visual has supplied all LED screens.

ROE Visual and Breda University of Applied Sciences have engaged in a partnership to enhance knowledge about virtual production and XR stages for an upcoming generation of content creators by opening a virtual production research center. ROE Visual supports the high-ranking Game Development University with high-end LED products to enable its students to work in a full-fledged XR stage environment.

The partnership focuses on the development of a virtual production research center. Here content for XR Stages can be developed, and students can test the interaction of content playout systems with the LED wall. The students will have access to high-end virtual production technology, equivalent to what is currently used in film studios and XR stages all over the globe.

About BUAS – Game Design
High rankings in both the Princeton Review rankings and the Rookies World School Rankings for Game Design indicate the BUas Game Design program is one of the best in the world. Whether you want to be the best gameplay programmer, an award-winning character artist, or a game designer who creates Triple-A titles, it all starts in Breda at Breda University of Applied Sciences. BUas alumni work for the most prominent companies worldwide. BUas has developed partnerships with Sony, Epic Games, ROE Visual, and SideFX.

Founded in 2006, ROE Visual manufactures unrivaled, award-winning LED display technology for a broad range of applications, including touring productions, broadcast, film, live and virtual events, corporate, architectural, retail, control room, and many more.
Used by the most significant touring artists and spectacular broadcast events, retail and architectural installations, ROE Visual's products live up to the exacting demands of the industries creatives and technologists. ROE Visual products offer maximal creativity, ease of use, durability, and visual excellence. By enabling spectacular and breath-taking visual effects to come to life on a large display format, immersive experiences for performers and audiences all over the globe can be created.
The company enjoys relationships with leading global AV Installers, rental companies, and notable partners in the production, film, and event industry. ROE Visual offers expert knowledge in LED display technology and extensive support on a global scale through its American, European, Japanese, and China-based teams.