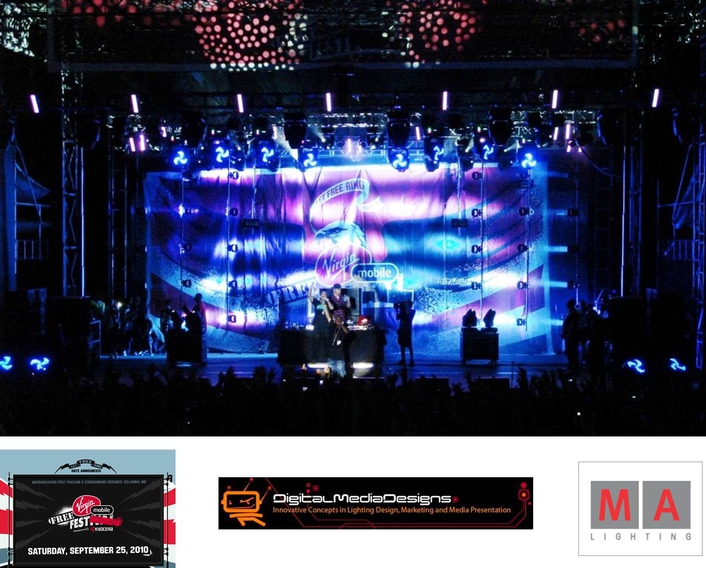 FreeFest attracted some 40,000 fans to the Merriweather Post Pavilion and surrounding grounds at Columbia, Maryland
When Scott Chmielewski, president of Digital Media Designs, put a pair of grandMA2 full-size consoles through their paces at Virgin Mobile’s FreeFest, a day-long music and dance extravaganza, he deployed the grandMA2’s brand new 2.0 software with stunning results.

FreeFest attracted some 40,000 fans to the Merriweather Post Pavilion and surrounding grounds at Columbia, Maryland where headliners included Joan Jett, Lucacris and M.I.A. Chmielewski, whose Digital Media Designs offers innovative concepts in lighting design, marketing and media presentation, served as the designer, programmer and production provider for the event and was responsible for the dance stage and one of the two primary stages.

“Everything went exceptionally well,” he notes. “I was able to previz the show about a week before the event and, with the use of grandMA 3D (MA Lighting’s free visualistion software), I was able to have most of the show done before we ever loaded in. Running the software on my MacBook Pro I never saw a hiccup in the previz, which was surprising given the amount of fixtures we were using. I was even able to run grandMA2 onPC and grandMA 3D at the same time.”

Chmielewski used “every aspect” of the console family and its new 2.0 software, including grandMA 3D, MA NPU (Network Processing Unit), MA VPU (Video Processing Unit), Art-Net and multi-user sessions. “The new layout views were an amazing tool, especially when using large amounts of fixtures and data,” he reports. “The whole process was very logical. You’re no longer limited to a ‘grid’ for placing fixtures; they can be placed and dragged freely and more logically, and the amount of information that’s provided is invaluable. Combining this with the new effects engine made for a whole new array of tricks and abilities.”

He found that features such as open-ended macros, preset-based effects and cue-list commands “opened a new window of abilities to programmers and designers. These features and automation techniques save valuable programming time which allows for more creative instead of purely technical programming.”

As is usual during a festival, Chmielewski had to interact with several of the bands’ lighting designers. “For most of them I provided console views that were executors and faders with the effects and cues that they requested,” he explains. “The Direct Action ability on those screens was a great feature and made operating for the touring guys very straightforward. The ability to set up worlds also meant I never had to worry about anyone going beyond their skill level or affecting other vital parts of the show, including key lighting or effects.”

“The network sync-ability of the grandMAs was flawless,” Chmielewski concludes. “Freefest required us to use every aspect of the grandMA, and the system really delivered for us.”

A.C.T Lighting is the exclusive distributor of the grandMA in North America.