Lancelot beams cut it front of house for One Direction
One Direction is the boy band of the moment and is presently in the midst of a global tour that began in South America and has now landed in the UK and Europe.   This is a full-on stadium tour with all the production values that accompany it: Manchester’s Etihad Stadium, Wembley - they don’t come much bigger than this.  The hardware for Paul Normandale’s lighting design comes courtesy of Lite Alternative and the followspots, chosen as the first option for both FOH and on truss, are Robert Juliat fixtures that come with the reassurance of premier customer service from exclusive UK distributor, Ambersphere Solutions.

With a thirty metre thrust stage leading into the centre of the stadium and the most video screen yet to be toured with an artist, the choice of followspot was a key component to a successfully lit show, as Normandale explains: “My design was really determined by the set and the video – I put up lights that I knew would be able to perform against so much screen and sunlight. There is no front truss and the boys spend most of the set on the thrust or the screamers (runways that extend stage left and right) so the followspots are a vital ingredient in providing key light for the cameras and, indeed, for the audience.”

Rigged on the delay towers mid-stadium are a total of six Robert Juliat 4kW Lancelot followspots (one for each band member and one spare).  Dave Lee, lighting operator on the tour, is full of praise for them: “The Lancelots are as bright as hell with a beautifully even field.  I use the integral frost diffuser in the unit to soften the hard edges each time the performers come close together.  It works a treat without losing any light from the beam.  I wouldn’t consider using anything else but Robert Juliat: they are more than up to the touring life – not an easy ask for a FOH spot.  You just take them out of the flight case and they work.”

Lighting crew chief, Wayne Kwiat concurs, “I just love these spots.  They outclass anything else on the market as far as I’m concerned in terms of brightness, performance and reliability – there’s nothing to touch them.  The job they and the truss spots do is such an important component to the show.  We’ve used Robert Juliat on the truss as well: the Flo 1800W.  They’re the same size and weight as an equivalent 1200W unit but that much more powerful.” 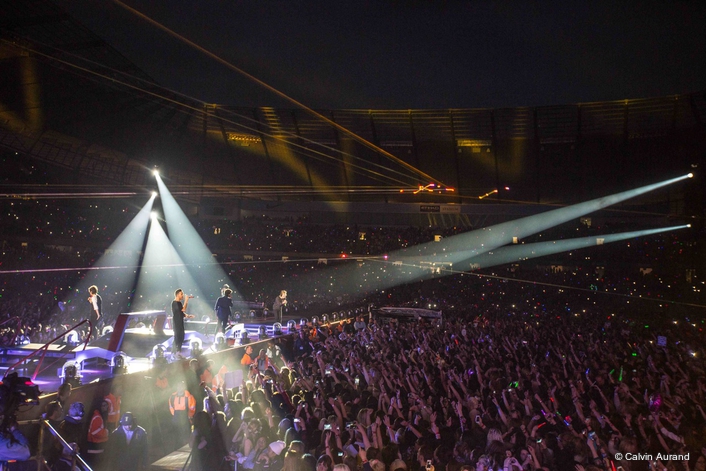 Lancelot FOH on One Direction

The five RJ Flo 1800W followspots are rigged on the upstage edge of the trussing.  Lee adds, “The Flo may be compact in design but it’s still engineered to favour the end user just like the Lancelot.  The controls are superbly balanced and fluid which makes operating a pleasure.  We originally chose the Flos to give back light for the cameras – they do that very effectively – but they are so bright we can use them as fully functional back spots all the way down to the B-Stage at the end of the thirty metre thrust.  Now that’s quite extraordinary!”

Brilliant Stages Delivers...here We Are
Only One Direction for XL Video
Robert Juliat Victor Foll...wig and the Angry Inch”