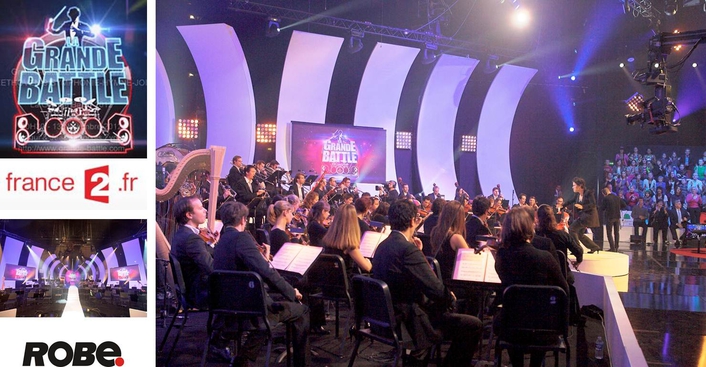 .
The ‘La Grande Battle’ concept brings a slightly different take to TV music talent competitions .... An orchestra performs classical pieces which are reinterpreted by a series of contemporary performers - in their own style. Broadcast annually on France 2 it's fast become a cult 'must watch' event for popular music lovers and this year attracted over 2 million viewers!

This year, Lighting Designer David Seligmann-Forest from lite4life incorporated over 120 Robe moving lights in his design for the show, which was recorded at Le Carrere studios in St. Denis, Paris.

Seligmann-Forest is a big Robe fan, and has been a loyal user of the brand right from the start when it launched back in 2002.

Having also lit La Grande Battle last year, this time around he took the opportunity of using some of Robe's newest technologies, including the LEDBeam 100, together with LEDWash 300s and 600s and ColorSpot 700E ATs.

The fixtures were rigged all over the roof of the large studio and used as truly multi-purpose instruments. They washed the set pieces designed by Michelle Sarfati which were and based on a series of striking scenic ribs on the orchestra side, with a more open space opposite, backed by a large LED screen, where the bands performed.

The LEDWashes were also used for general washing and for key lighting the orchestra and bands.

With a very tight rehearsal schedule, Seligmann-Forest’s visual ideas for each artist had to be developed and programmed quickly and confidently – a process greatly helped by spec’ing Robe fixtures, together with the skills of programmer Jerome Claude using a grandMA2 console.

As he watched the rehearsals Seligmann-Forest chose different looks and themes for the diverse selection of performers - which ranged from blues to rock, jazz to folk and  ‘trash’ to cabaret. Each had their own ident and looks.

He enjoyed lighting the 50-piece orchestra from The Paris Conservatoire as if they were a rock band - with plenty of vibrance and drama - ensuring they looked great on camera as well as to the very enthusiastic live studio audience.

Seligman-Forest specifies Robe for all his projects – the majority of which are in television, commenting, "Robe is without doubt the best moving light brand currently available”.

He adds that he is constantly impressed by Robe keeping ahead on the innovation front, “Robe was the first to perfect a homogenized light engine for their LED fixtures”, and he thinks that the LED range is definitely ahead in terms of output, the quality of light, colour range and smoothness. 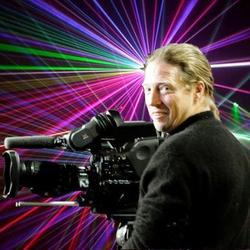 The super-small Robin LEDBeam 100 has recently been added to his regular kit list.

He loves its smallness and brightness and also finds it infinitely useful for filling black holes in a set, "You can literally squeeze them in anywhere as they are such a handy size!"

He used them for the first time on the recent series (and his third) of Masterchef, which he lit entirely using Robe LED fixtures.

He is also eager to start using the new MMX WashBeam as well as the DLX Spot and DLF Wash.

The Robe fixtures for La Grande Battle were supplied by Rental company Yes via LightCo.

The 2012 Grande battle was won by Zac Zazou from Amiens, who reinterpreted a piece from Bizet’s ‘Carmen’ on an amazing array of improvised instruments made from metal saws, drainage pipes and extraneous other elements of industrial trash!

Robe - More Than A Pretty Face!
Robe Does It Gangnam Style for Psy Concerts
A Handsome Couple: “Let...�s Dance” with grandMA2