Robe Unwinds in the Backspace

It’s amazing what can be done with just 11 Pointes, some foresight and plenty of imagination … and so LD Mark Wynn-Edwards is blazing a trail across Europe with UK electronic duo Lamb and a lighting rider comprising 11 Robe Pointes! Robe’s live reporting team caught up with him at the Ancienne Belgique in Brussels – where he also had the luxury of using the house’s MMX Spots.

The Pointes were lined up along the back of the stage alternated on two levels – five on the bottom and six on cases forming the upper row - and created all the drama and atmospheric compliment needed for the band’s riveting 80 minute set. Their completely unique sound fused elements of triphop, d’n’b and jazz into compelling harmonic compositions with haunting vocals.

It’s great music to light, and Mark is clearly having a ball! 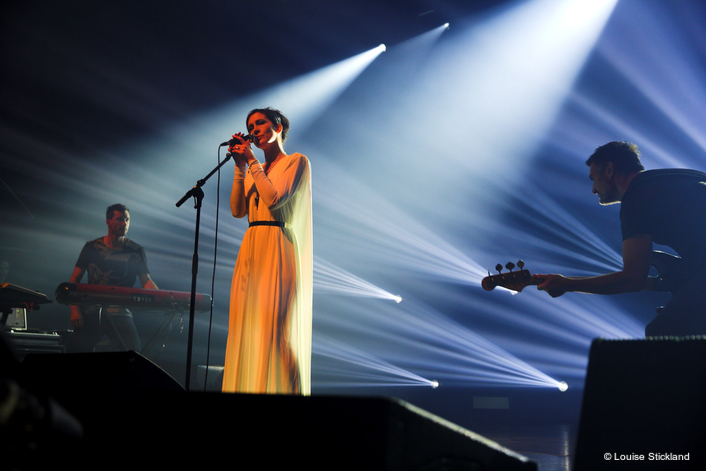 He explains that inspiration for the style of lighting he’s evolving for this tour came from the stark monochromicity and ‘reality’ of black & white cinema, and much of the set is lit in white. With the Pointes, there are so many variations in how you can treat the light that the same look or effect is never repeated twice, even using one colour!

When saturated colour is introduced, it has maximum impact.

“This show is really all about lighting the ‘negative’ spaces on the stage,” he says.

The sinister blue flicker in ‘Binary’ was provoked by the electric sound of the music which reminded him of sparking connections and tesla coils; In ‘Doves and Ravens’ the intense dark blue reflects the theme of the song and the idea that lead singer Lou Rhodes is stranded alone in a cold winter; The hit ‘Gabriel’ is lit in red because it’s all about love and big hearts. The ravier tunes are interspersed with the splashes and pulses of colour – both from the Pointes and the four colour-changing LED strobes which are the only other lights on the rider. 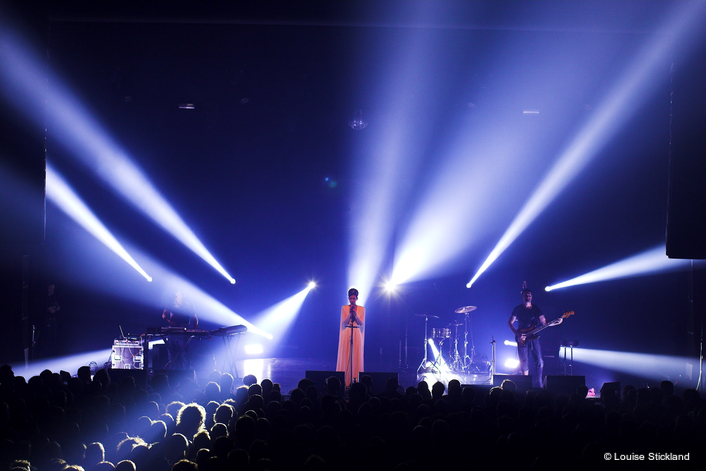 Mark first used Pointes earlier in the year on Jamiroquai’s tour, so he was aware of the possibilities, and when Lamb came up, he needed something small, light and bright!

“An incredible amount of light comes out of such a compact fixture!” he declares.

He also needed a light with good optics and a cool range of effects like gobos and prisms which are an important part of “the ‘black-space’ idea that frames the stage”.

He recalls telling the band with absolute confidence that the 11 Pointes and four strobes would be more than enough to produce a genuinely diverse show. After the gig on the tour in Brighton they were completely blown away with what they had just experienced onstage.

Lighting is also something they very much like to ‘feel’ as the set unfolds. It’s almost like the fourth member of the band! 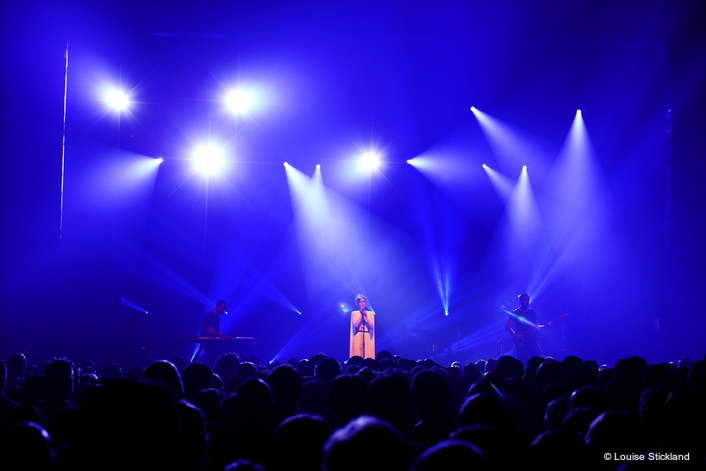 Mark is touring his own Hog 4 console and completed most of the basic programming in a short timeframe and a small rehearsal space in south London. As this is also one of those shows which is constantly developing, some tweaking is done on a daily basis.

They are insisting on the 11 Pointes at every gig – no substitutions.

For the UK tour these were toured and supplied by Blackburn based HSL, and at the Ancienne Belgique show they came from Belgian rental house Phlippo Showlight.

The European tour runs until the middle of December, and they are then currently scheduled to visit Australia and New Zealand.

There is a massive amount of interest in Lamb whose are right back on the scene having just released “Backspace Unwind”, the first studio album work as Lamb since 2003, while the social grapevines are alive and buzzing with vibes about the shows … as well as plenty of  positive comments on the lighting … much to Mark’s delight!

Gordon Biggins, of the Lamb’s management company Strata Music comments, “Lighting is a key ingredient to the band’s new show. Great lighting, when it’s in tune with great music, can turn a live show into something extraordinary, ethereal and unforgettable.

“Mark’s lighting affects the band on a nightly basis. He’s doing a fabulous job. It’s the first time I’ve ever heard our audiences gasp in delight at a lighting effect rather than a poignant moment in one of the songs!!

“Whilst on stage they react not only to the lights themselves but to the audience’s reaction to the lights. They feed off all the energy coming back to them from the audience, and the shows are all the better for it”.