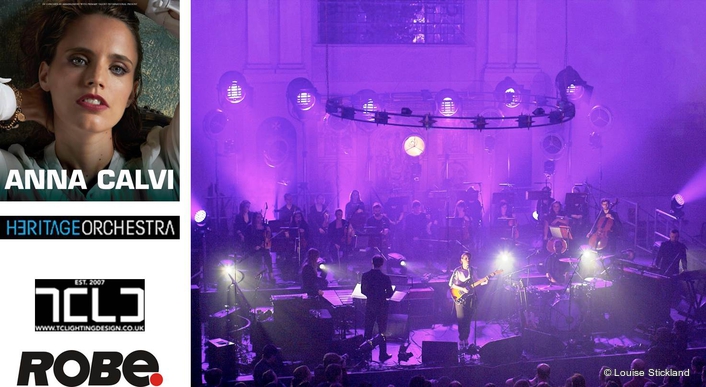 Lighting designer Tom Campbell loves challenges!
So … when tasked to imagineer the ambience in a special setting for award winning singer, writer and guitarist Anna Calvi’s performance with the Heritage Orchestra at St John’s Church, Hackney, east London, he combined imagination with a Robe moving light rig and some novel ideas … to unfold a richly layered piece of lighting sculpture.

Factors galvanizing the production were no flying facilities and only a single phase 63A power supply to run all the technicals – sound, lighting and a full camera shoot. This was split into two single phases to run the production.

All these however, were easily outweighed by the excitement of being part of a distinctive show in an amazing site specific venue.

In addition to the Heritage Orchestra, with whom Calvi had performed a Giorgio Moroda tribute earlier in the year at Sydney Opera House, the evening saw many exclusive collaborations with a series of special guests.

Tom lit a festival tour earlier in the year for Calvi , including her incendiary set at Glastonbury’s The Park Stage – and so he took the floor-based design from this as the basis for St. John’s Church, expanding and adapting the concept to fit the space and occasion.

Any ground support was out of the question as it would have ruined the aesthetics of the church, and an additional test for Tom’s design skills came in the form of a fixed circular pipe structure hung above the stage housing the altar lights. This effectively capped the ceiling height for his design, however did find that the spherical halo-like nature of this contained the visual picture very effectively!

To add to the visual quirkiness of the surroundings, he specified six custom 10K fresnels which retained their fabulous classical shells and outer casing, but inside were fitted with Robe LEDWash 600s complete with a transparent LED panel across the front.

These were rigged on stands upstage and complimented with seven Patten 2013s on 6 and 8 ft high tank-trap stands. Each Patten 2013 had a LEDBeam 100 rigged immediately below it on the stand, so these tiny movers could be focused directly up into the Patten 2013. The LED source was reflected back onto the stage via its dish surround, and this touch of invention brought a completely different dimension to the spacey retro fixtures.

Another 12 x LEDWash 600s were dotted around the floor and rigged out in the room and on the balcony, utilized for general washes from jaunty angles across the choir and orchestra.

Ten of Robe’s MMX Spots were split into two groups, six running across the stage in front of the orchestra and four rigged on the balcony.

A single Robe BMFL was positioned upstage centre and kept for one powerful back lighting moment effect in “Strange Weather”.

Tom operated the lights with his own Avo Tiger Touch console, and the rest of the kit was supplied by rental company Siyan, whose Jez Johnstone managed the account.

The lighting aesthetic was stripped back and raw to match the intensity and intimacy of Calvi’s highly visceral performance, a feat that Tom executed with exceptional sensitivity and feeling, ‘playing’ the lighting as if it were an instrument. 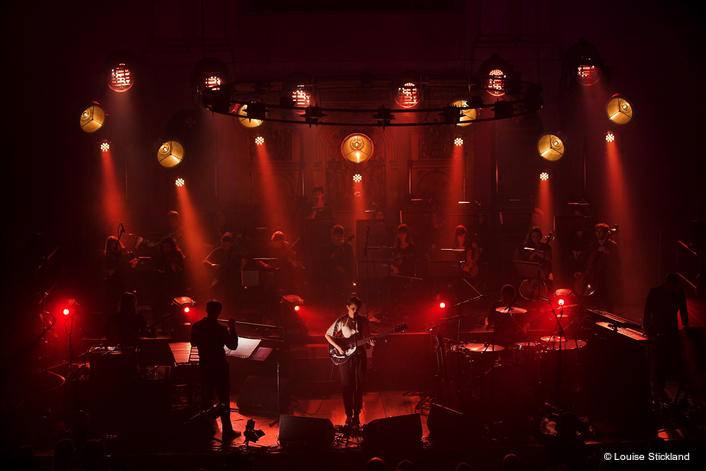 He loves the luscious and real tungsten capabilities of all Robe’s fixtures including the LED sources, and he used this feature subtly in this show. He also appreciates Robe’s colour mixing in general with the “Rich range of lovely pastels” and also the quality of the light output - all subtleties which were are key to lighting a show like this appropriately.

The results helped create a sensually beautiful, textured and immersive environment for all to enjoy … and for the cameras to capture for future reference.