Robe Spikies enjoy Time of their Lives with Pitbull 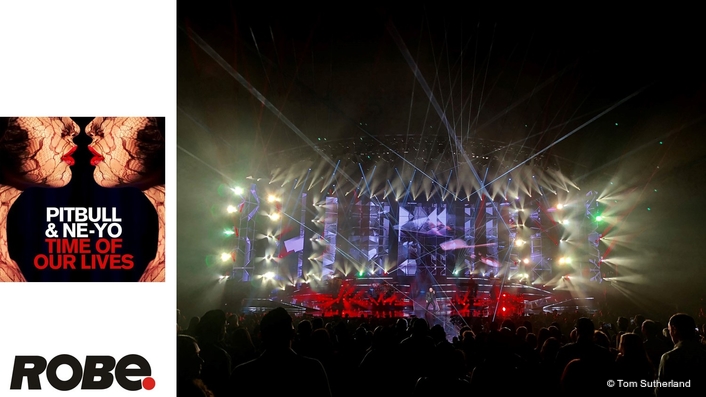 “We had brand new 470W HMI lamps right next to the Spikies, and on a few occasions, I couldn't tell which lamp was which!” stated lighting and visuals designer Tom Sutherland talking about rapper Pitbull’s current “Time Of Our Lives” residency playing at the Axis Theatre, Planet Hollywood, Las Vegas. Tom has incorporated 110 Spikies into his rig … and the super-bright little luminaires from Robe are certainly holding their own in a substantial lighting rig of over 600 fixtures.

Tom first started working with the popular artist, record producer and activist over the last year, and was asked to redesign his show by producer Macarena Moreno with whom he had previously worked on The Latin Grammys.

Pitbull’s Las Vegas residency has been running for the last couple of years, usually in blocks of three or four weeks at a time, three or four months apart, and it’s a “90-minute non-stop party with each song starting big and getting BIGGER,” described Tom.

The 4,600 capacity Axis Theatre has a massive curved house video wall at the back which is included in the technical package, so Tom’s design was evolved around that, which as it happens, really suits the style of their show. It gave “Pit and the dancers a bit of a playground,” explained Tom. 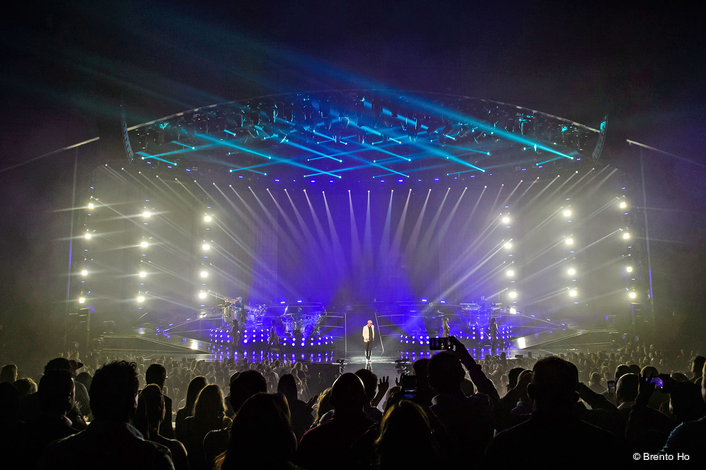 With the auditorium also being curved, Tom wanted to ensure that everyone, wherever they were seated in the house, received a fantastic visual experience so he added four screens downstage left and right to maximize the space and sightlines.

The Spikies are used to define the huge 90ft curved truss that outlines the shape of the set, which they call ‘The Beast!’

Onstage, 12 towers follow the curve of the set architecture, and each of these is also rigged with 5 Spikies, and more Spikies are positioned on the scenic ramp traversing the stage.

Tom chose Spikies because he needed something with “high impact and flexibility that wasn’t going to swallow the entire budget.” Utilizing Spikies – supplied, together with the rest of the additional lighting package by PRG - he could get a large quality of fixtures to help show off the geography and design … for a great price. 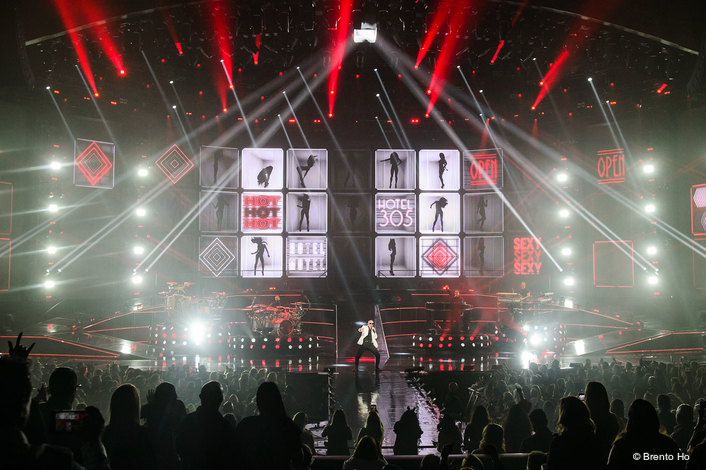 During the show, the Spikies are used extensively. They can “completely fill the sky” when zoomed out or throw hundreds of sharp, piercing beams across the stage when zoomed in. “They are perfect for this” declared Tom, “I love how I can create absolutely enormous looks with something so small and cost effective” … they really help energize ‘the party’ onstage!

The overall look and feel of the show encompasses a grand Las Vegas spectacle. The audience go in there expecting to be WOWed and that’s what the entire production team and artist deliver. From his own observations – the incredibly enthusiastic audience reaction sustained from start to finish – he reckons it’s going well! 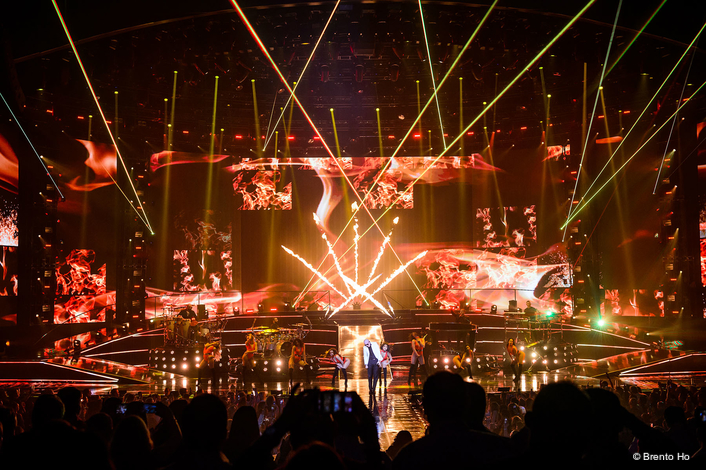 A major challenge has been the sheer pace of the set! Usually you might get a ballad or a slightly slower number at some stage and a bit of a chance to take a breather … but not on this show!

The moment Pitbull hits the stage and the mic; it’s relentless, boisterous and banging! “This REALLY pushes your creativity and the latitude of the design to be able to be fresh and invigorating throughout,” said Tom, adding that the Spikies have been a “great tool” in achieving this objective.

Lighting, video and lasers all work together in harmony for the performance, and Tom’s spent serious time and energy on making sure that each element compliments the others and that they all have their moments. 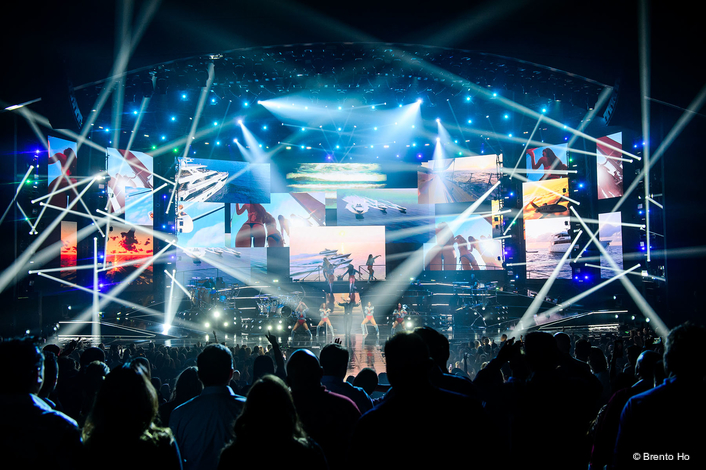 Building the show, he worked closely with programmers Nick Hansen (lighting & video), Craig Caserta (lighting) and Lawrence Wright (lasers). They are using grandMA consoles for lighting and video and a Hog4 to run lasers, with Hippotizer media servers. Craig is the lighting director for the residency runs and takes care of everything night-to-night.

Tom uses Robe products frequently in his work – which is currently keeping him busy worldwide with a hectic schedule in the US and Asia, and sometimes back in Europe or his native UK! 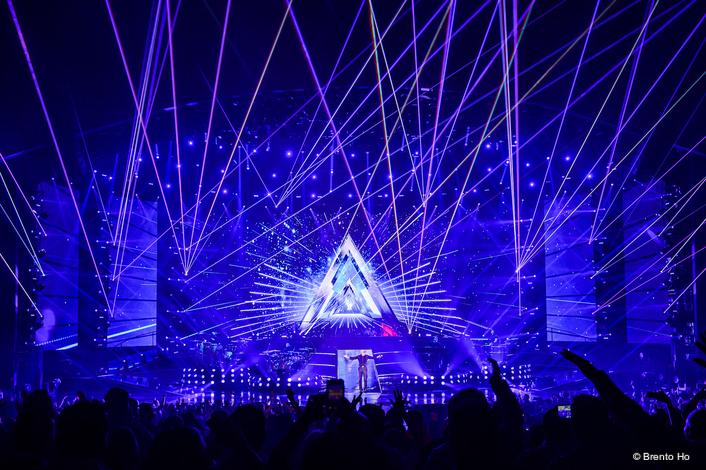 He thinks the general advancement of technology in the industry in the last 10 – 15 years has been rapid, and the pressure is on for manufacturers to keep innovative and ahead of the game. “Robe is one of the companies at the forefront of invention, and as  designers we really rely on this initiative and foresight.”

Tom takes on shows that interest and excite him and works on a mixture of concerts, tours events and TV productions, ‘It’s great to be able to keep things dynamic and mixed,” he concluded.