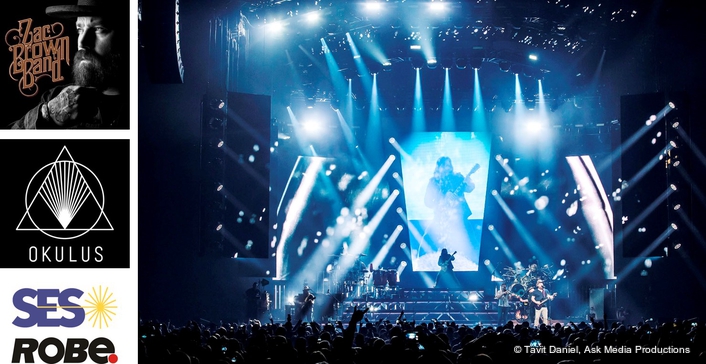 Multi-platinum, Grammy-Award winning artists Zac Brown Band (ZBB) is on the road again with a new album “WELCOME HOME” and a brand-new production lighting and visuals design created by James Scott and Louis Oliver from UK-based creative design practice, Okulus. James and Louis have included 32 x Robe Spiiders on the lighting rig, which are integral to creating the look, feel and lighting ambience of the show.

James has been working with  Zac Brown Band since 2014 and since 2015 this has been in conjunction with Louis and Okulus … adding the dynamic and strategic advantage of now being able to offer two design ‘heads’ for each project.

While the previous two tours featured prominent structures and multi-layered set pieces, the aesthetic brief for ‘Welcome Home’ was to strip things back, bring the band physically closer together and make the whole live concert experience more intimate and very connected to the audiences.

A U-shaped riser set up was proposed from the outset, with a central screen to run some ambient playback video content, but primarily to carry a portrait camera shot of Zac Brown himself. After that, they had a free rein to produce ideas, from which James and Louis drew on their experience and knowledge of the music, the vibe and what they were confident would work well for the band in this context.

The eye-catching chevron shaped set, designed by Louis and James comprises a main tiered U-shaped section which accommodates the sizable keyboard and percussion rigs and leads to a central top tier platform, utilized for solos and guest appearances. The drum position mirrors the percussion and the bassist is over at far stage left.

The set fascia and stair fronts are crafted from leaf-shaped, rust-treated metal cut-outs … lined with LED tape and back-lit with strobes. 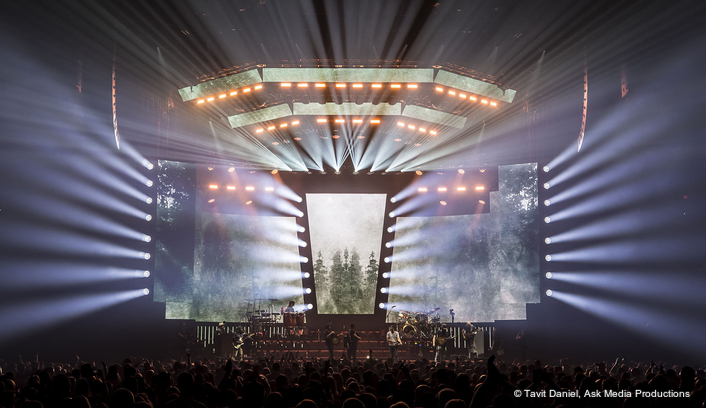 The video design is based on a curved upstage wall, broken up with the central portrait orientated IMAG surface described above. Theatrical styled stage wings are created with four columns of video framing the stage, two per side, which work with two U-shaped roof video ‘ribbons’.

The 32 x Spiiders are rigged in groups of eight.

Sixteen are mounded in a special trapezoidal shaped ‘surround’ structure that is flown in front of the central IMAG portion of the screen. 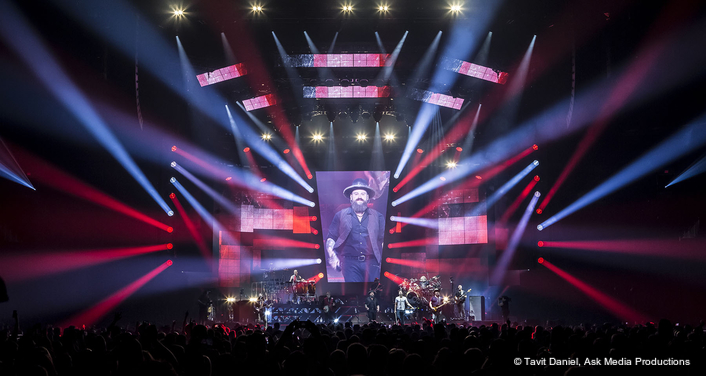 The other 16 are positioned on the two outer downstage edges of the stage, rigged in Tyler pre-rigged trussing with a surround mimicking the trapezoidal shape of the central screen ‘frame’. All of these are finished in the same rust metal texture as the set fascias.

They picked Spiiders for these very precise positions because they wanted an LED fixture capable of outputting punchy, stage-framing looks that could also be mapped and run with textural video content.

“The Spiiders did this perfectly and more,” reported James. “They used the central 60W single LED cell of the fixture to produce gobo-like flower effects and also spot fixture type beams … while the exterior LED ‘cells’ could tone that (beam) with a selection of “beautiful saturated colors.

James stated that both he and Louis “absolutely love” Spiiders.

“In this show, we make some very bold statements with them using bright saturated colors and tight parallel beams, and had some serious fun utilizing the central flower effect and mapping the fixtures with content on the media servers.”

The main focus of the show is, naturally, the band and over the years Okulus has developed a distinctive and original lighting style for ZBB’s live shows, for which they work closely with their visual content creative collaborators Lightborne, to ensure a cohesive and harmonious flow between lighting and video elements. 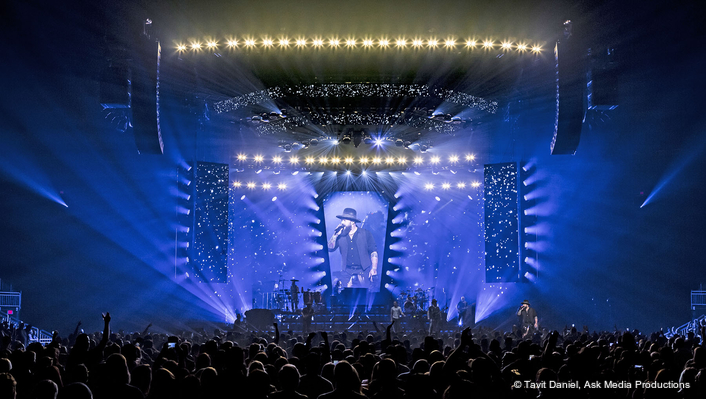 Okulus first used Spiiders earlier in the year on a design for the Australian leg of Passenger’s 2017 tour, swapping out another product out for these new Robe fixtures … to great effect.

The challenges of developing the ZBB tour lighting and visuals have been numerous. A major one is the 70 plus ‘master pool’ of songs from which they choose the set and that that varies each night! The organic nature of this live performances means that the show can take any number of different directions. 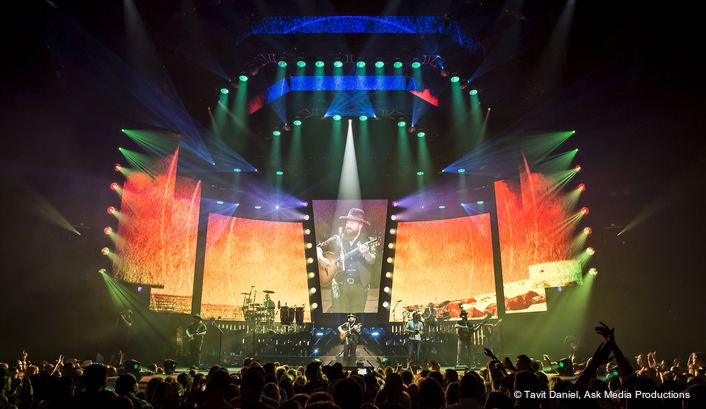 Both Louis and James are very pleased with this design and feel it’s their best yet. They both pre-programmed the show at Okulus’ Viz Studio and onsite during production rehearsals at the LJVM Coliseum, Winston Salem, North Carolina, a process that encompassed lighting, video playback and live camera integration.

It is all run through a grandMA2 console and Green Hippo Boreal media servers being operated on the road by Chris Cockrill – now enjoying his second year working with the band.

The lighting equipment – including all the Spiiders – is being supplied to the tour by Special Event Services (SES) also based in Winston Salem and their lighting crew chiefs are Kyle Klapper and Nick ‘Snake’ Bird. 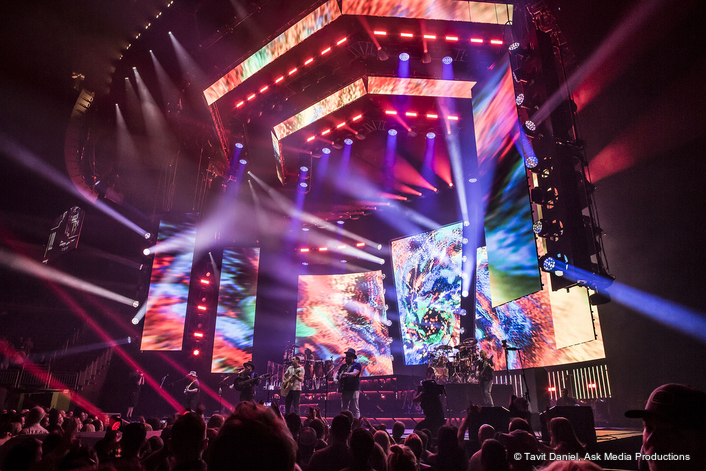 SES has been working with ZBB since 2009 and has more recently invested in Robe products for this and other tours. Head of lighting Jeff Cranfill stated, “I love the Spiider.  The basic features of a graceful pan, tilt, dimming and color mixing system make it a beautiful wash unit with a great zoom range. Add in the special effects of the flower and the pixel mapping capabilities and the Spiider becomes a wonderful tool for creating looks, from soft gobo effects to becoming part of the show’s video content.”

He added that they are “very happy” with all their Robe products out on the road which have been solid and reliable as well as “producing so many wonderful looks.”

He thinks James and Louis have created “an outstanding design” that has performed well in a variety of venues.