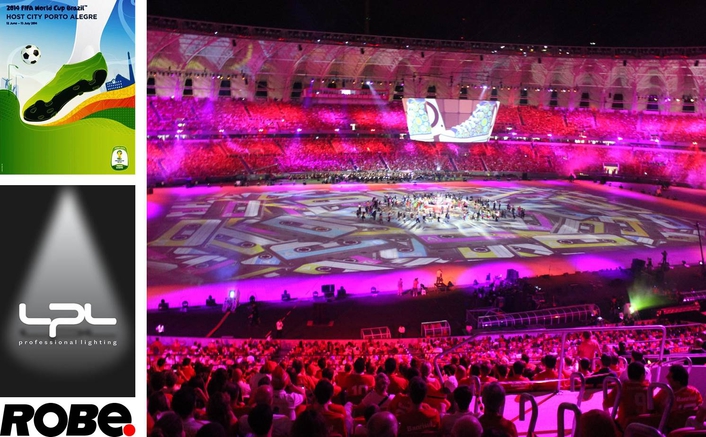 .
Over 500 Robe fixtures were in action for the stunning Opening Ceremony lightshow designed by Patrick Woodroffe to celebrate the official re-opening of the refurbished 56,000 capacity Estádio Beira-Rio (Riverside Stadium) in Porto Alegre, Brazil.

Woodroffe – who needs no introduction as a creator of internationally renowned lightshows – brought his vast experience of producing stadium events to Brazil where he collaborated closely with Sao Paulo based Lighting Designer Cesio Lima on the project.

The stadium – the second biggest in the south of Brazil, home to the Sport Club Internacional team and legendary in the history of Brazilian football - has undergone massive redevelopment at its picturesque location beside the River Guaiba to bring it in line to host key matches during the 2014 FIFA World Cup.

The opening Ceremony for the ‘new’ venue was a very special moment, and so there was a huge pressure on all the technical departments and Show Director Edson Erdmann to deliver a landmark event that would be etched forever on the consciousness of Brazilian sporting enthusiasts.

Another challenge was ensuring that the lighting worked harmoniously with the eye-catching pitch projections.

In addition to these, there was a cast of 500 actors / dancers, 400 plus musicians to light an incendiary set by Fatboy Slim which concluded the four hour extravaganza in style.

To light the field of play comprehensively, the stadium was divided into three sections or layers. 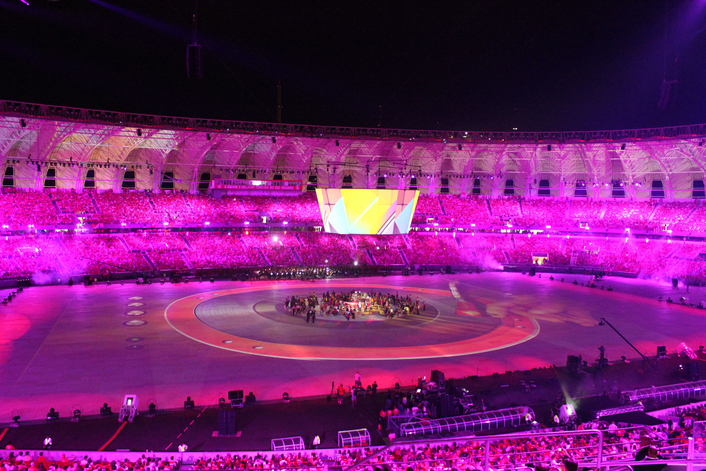 The top tier - rigged in the roof above the seating stands and the furthest away from the performance area – saw the most powerful fixtures deployed – Robe’s ColorWash 2500E AT, ColorSpot 2500E AT and ColorBeam 2500E ATs, together with 24 x ROBIN MMX WashBeams and 96 of the 113 x ROBIN Pointes. These were the primary fixtures used for throwing light down onto the field of play and also illuminating the audience.

The MMX WashBeams – due to their framing shutters – were also used to pinpoint specific objects or performers, while the Pointes were also used to help recreate some of the team’s great footballing moments as the show unfolded. A bit later on, a Pointe was used to follow-spot a time capsule prop being carried around the field. 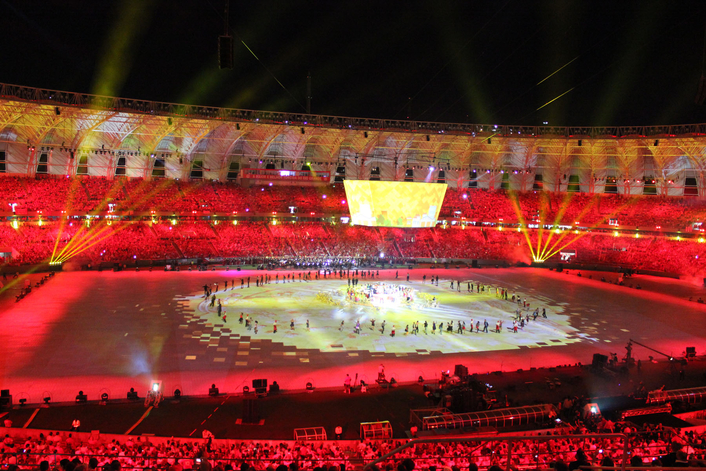 The second ring of lights were mainly beam lights using 5r bulbs plus some more Pointes and ColorSpot 1200EATs and ColorWash 1200E ATs.

The third ring was mainly the 66 x LEDWash 600s positioned around the perimeter of the pitch, used for skimming and washing across the area in big, bold, bright sweeps of colour.

At each of the four corners of the field behind the line of LEDWash 600s were 5 Pointes, used for special effects and shooting intense angled beams that sliced right across the field of play.

In addition to the main performance action on the pitch, two smaller mobile stages involved in the show were moved on and off at different times – on one was an orchestra and the other a series of local pop and rock bands. 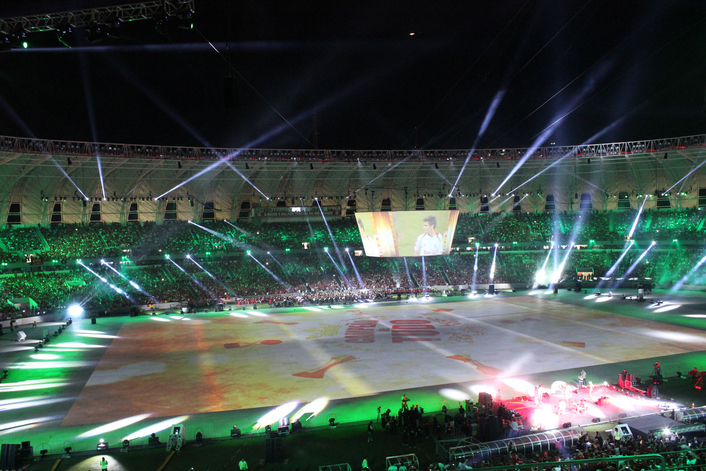 As Woodroffe and his team unfolded their collage of beautiful lighting pictures to collective ‘ooohs’ and ‘aaahs’ from the crowd, these would match, compliment and contrast the colour or style of the projections, creating frames around the giant images. At other times he conjured up ingenious ways in which to cross over lower level lightsources so they just caught the cast and performers in the beams without spilling or interfering with the projection.

When Fatboy Slim took to the stage to rock the Estádio Beira-Rio, he was surrounded by 50 of Robe’s little LEDBeam 100s positioned on the stage floor by the crew in a lightening quick manoeuvre, a feat that would have been near impossible to achieve so quickly with larger or heavier fixtures.

At this point the classy stadium multimedia show transformed into a giant psychedelic dance party vibe with lighting to match, multiple colours, patterns and texturing firing in all directions, energizing and reaching out to everyone in the house!

The lightshow was programmed and run on two grandMA2 full size consoles by Sergio Antonio and Paulo Lebrao. They, together with  LPL Technical Directors Bruno Lima and Caio Berti , Cesio Lima and Woodroffe worked tirelessly over 12 days to get the show set up and ready, approximately a third of the time you might normally expect to have in which to produce a show of this complexity and profile.

Antonio comments, “The fact that I know the Robe fixtures well helped us work very fast on the show – I particularly like the Pointes and the ColorWash 2500s”.

The show received overwhelmingly positive reviews getting the new look and newly inaugurated Estádio Beira-Rio off to a great start in the latest chapter in its life. 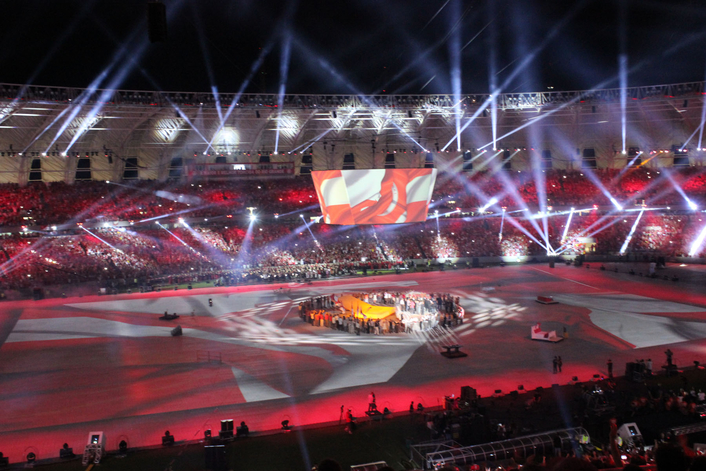 “LPL and all their crew also did a truly amazing job of bringing it all together and amassing that many moving lights – it’s the biggest ever installation that I have been involved in here! It makes me extremely proud to be part of Robe, and I don’t believe that there is any other manufacturer who would be able to supply that many fixtures together with this incredible back-up, support and local infrastructure”. 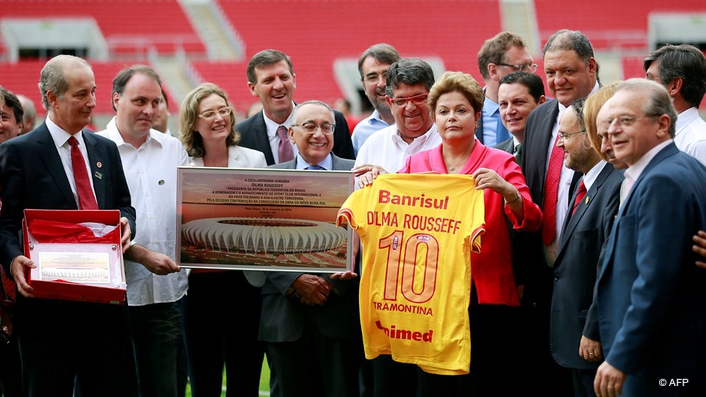