.
The 2012 Teen Choice Awards buzzed with extra excitement and anticipation this year … complete with an impressive live line-up including Flo Rida, No Doubt, Justin Bieber, Carly Rae Jepson and many more joining hosts Demi Lovato and Kevin McHale at the Gibson Amphitheatre at Universal Studios in Los Angeles, CA.

The challenge of lighting the fast-paced, action-packed environment was taken on by Tom Kenny, and included some of Robe’s latest moving lights in the visual mix.

The event was aired live nationwide on FOX  to huge ratings, and attended by a star studded array of almost everyone who’s hot in teen entertainment, including the cast of cult motion picture series Twilight, all in an equally fabulous array of sizzling outfits.

The pace and complexity of staging the 2012 Teen Choice Awards was a serious challenge to Kenny and everyone else on the production crew and creative teams.

Graphics and video content was at the core of the presentations and live performances, and with the stage already filled with a serious amount of light before a single fixture was fired up, this informed Kenny’s choice of luminaires.

He  studied the screen content for each live artist and evolved his basic lighting looks – colours, texturing and general ambience - from this, producing a unique look and feel for each performance. “It’s all about keeping the energy pumping for the show,’ he explains. 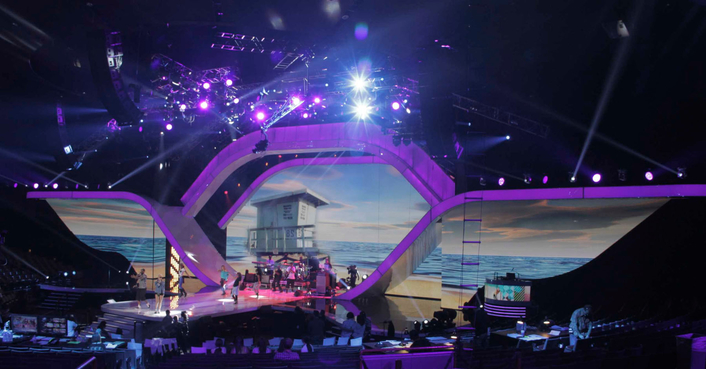 In terms of an overall appearance, the goal was to be big, bold and bang-on-brand.

Kenny’s ‘house’ lighting rig was substantial, with over 500 moving lights including a combination of Robe ROBIN 1200 and 600 LEDWashes, MMX Spots and LEDBeam 100s among others.

Kenny has started using Robe fixtures increasingly over the last two years and feels that Robe is really hitting the spot with the current ROBIN series products, particularly the LEDWash series and the MMX Spot.

On Teen Choice, he utilised Robe’s new LEDBeam 100 for the first time, with 24 dotted around the front of the stage and set giving dramatic reverse shot lighting eye-candy.

Kenny is impressed with the excellent smooth colour mixing and the range of colours on the Robes – always a key to lighting large and glitzy Awards shows – and also the general speed of the fixtures.

A staggering 134 million plus votes were cast by teen viewers aged 13 - 19 for a whole raft of Awards celebrating the most trending achievements in music, film, television, fashion, comedy and the Internet.

Kenny initially used Robe fixtures some years ago, when working in Ireland with leading Dublin-based rental company Just Light, and has liked them ever since.

However, with the ROBIN series more recently coming on-stream and expanding rapidly, he reckons that Robe has “Really got it right and upped the ante”.

The Irishman, now based in Miami and renowned for his razor sharp wit as well as his lighting skills, also has some serious rock ‘n’ roll legends on his resume including David Bowie, Jimmy Page & Robert Plant of Led Zeppelin, The Who and Eric Clapton to name a few.