Almost 300 Robe lighting fixtures were used to illuminate the 2017 Total Production International (TPi) Awards produced by TPi Magazine, part of Mondiale Publishing ... and staged at Evolution in Battersea, central London on Monday night. The event honours some of the best creative and technical achievement in the world of entertainment technology and was hosted by comedian, writer and actor Russell Kane – for the third consecutive year - who opened with a side-splittingly funny stand-up routine getting guests in the mood for another highly memorable TPi Awards.

Robe used the opportunity of being in front of the entire industry to launch a brand new lighting fixture - the pixelPATT - featuring 7 x 30W RGBW LED multi-chips, one in the centre surrounded by a ring of six, housed in a super-slim and lightweight brushed metal frame - which extends Robe’s PATT range of elegant retro styled lightsources. 20 x pixelPATTs graced a spectacular lighting rig designed by Nathan Wan, together with other new fixtures including the Spiider LED wash beam and the Spikie, and favourites like Pointe, ColorStrobe and DL7 range profiles and fresnels.

The starting point for the lighting design was the shape of the screen / set created by FIX8Group. A large V-shaped truss was at the centre of his idea, and this zig-zagged across the room maximising the headroom and the lateral space which was 40 metres wide, adding an architectural look and context that pulled the 1450 guests into the action with the lighting.

To get some height variation, 16 of the 20 x PixelPATTs were hung on drop arms off these V trusses, with another four flanking the stage each side on floor stands. The distinctive flower like shape was great eye and camera candy, and they became the signature look of this year’s show.

The pixels are all individually controllable, so as well as being a cool looking light source in its own right, there’s great potential for mapping effects.

Another new piece of Robe technology was the Halo pixel ring ... of which there were 42 in total fitted onto the front of Robe PARFect 100s. Twelve on a front truss pointed into the audience, complimented by the other 28 hung on the two runs of the central V truss … also on drop arms.

The Halo rings were run via inbuilt macros created by Robe giving a mellow rippling kinetic effect greatly adding to the dining atmosphere. 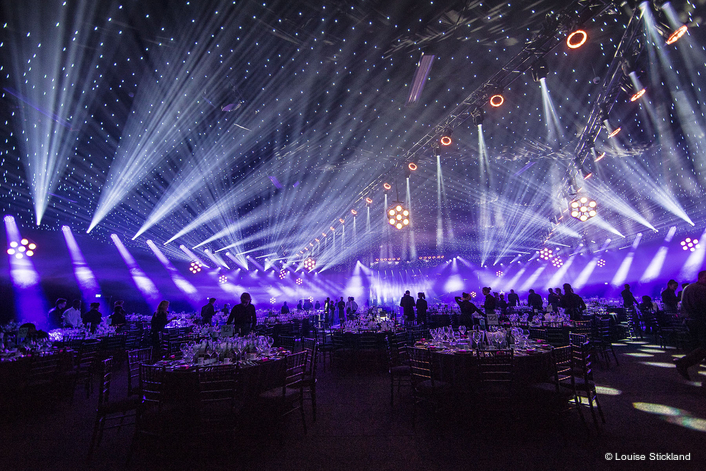 Nathan explains that the challenge with this format of events is always producing a comfortable environment for the dinner section of the evening. “Guests need to be able to see their food and each other, but you have to ensure it’s also intimate and cosy … it’s a lot more complex than it sounds!”

While eye candy and visual interest is incredibly important for creating good vibes in the room, for this event in particular, there’s also the consideration that the whole industry is looking at the production with a critical eye! 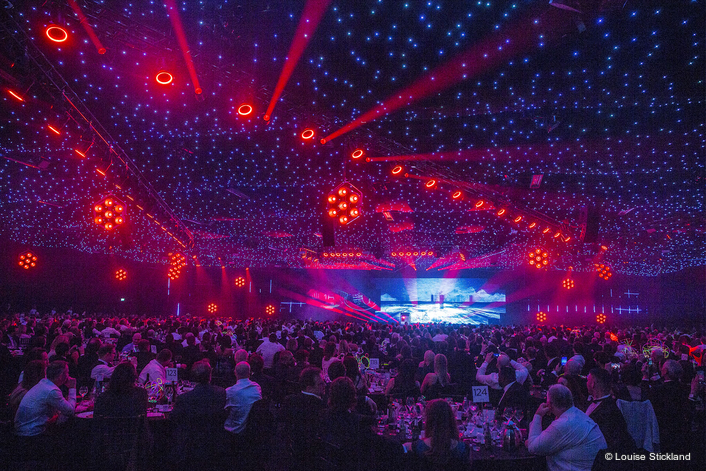 The workhorse lights where 54 x Spiiders, Robe’s hugely successful wash beam luminaire launched at the end of 2016. Dotted all over the trusses, during the dinner these helped the pleasant tungsten look, and when the Awards started, they swept across the massive room with big bold colour looks.

Forty-two Pointes were also deployed on the trusses, used for all the effects and sharp gobo work to compliment the Spiiders. "You can never run out of unique and interesting combinations with Pointes," says Nathan.

Plenty of effects lights joined the party. Sixty Spikies – a small, super-fast LED WashBeam – were deployed – 18 for the stage, nine on a truss above and nine in a line upstage on the floor - for dramatic aerial beam work. The balance were on the main V truss where they were ideal for whizzy room effects. 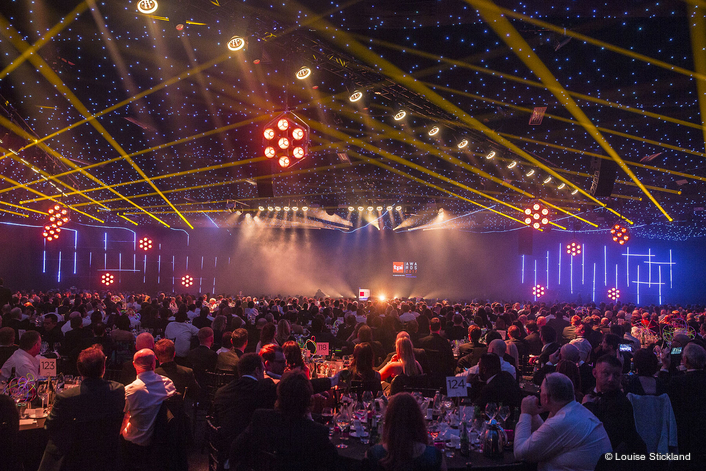 The 20 x ColorStrobes were rigged on the over stage trusses and the side V truss spans, bringing high-impact and razzmatazz to the visual picture … bright and powerful enough to hold their own against the big LED back screen.

Last but by no means least was the all-important key lighting … and for this Robe’s DL7S and DL7F LED luminaires – positioned on the front truss - were chosen for their great colour temperature, highly accurate tuneable white ranges and flesh tones.

All this was controlled by an Avolites Arena console running the main moving and effects lights and a Tiger Touch II for all the keys and camera lighting.

Time was – as ever – another challenge necessitating serious pre-visualisation. The physical   get-in was on the Sunday, and there was just one overnight programming session as the room was in use the next day for the TPi Awards’ first daytime event. 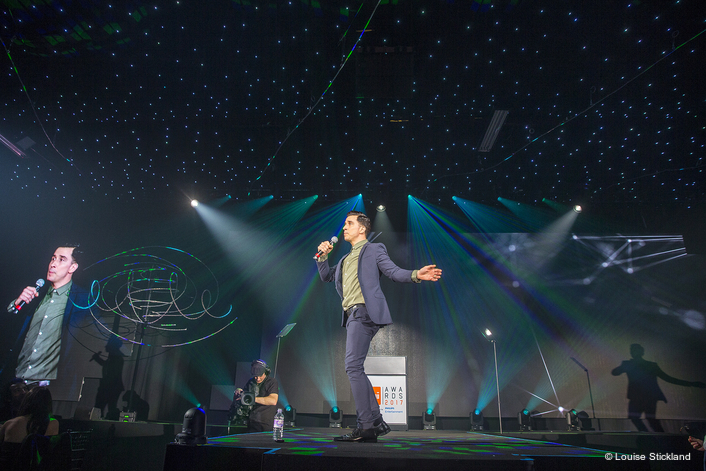 Kieran, a Professions Production Skills student and finalist from Guildford School of Acting, operated the main console for the show with Andy taking care of the keys and camera lights.

Andy and Nathan frequently collaborate on shows, amalgamating their experience and imagination from the worlds of theatre and rock ‘n’ roll respectively.

For Kieran, it was the first time he’s had a chance to work on a major prestigious large-scale project like this, and one with so much tech at his fingertips … for which he rose to the occasion with great style! “It was an awesome opportunity and a completely invaluable experience,” he commented. 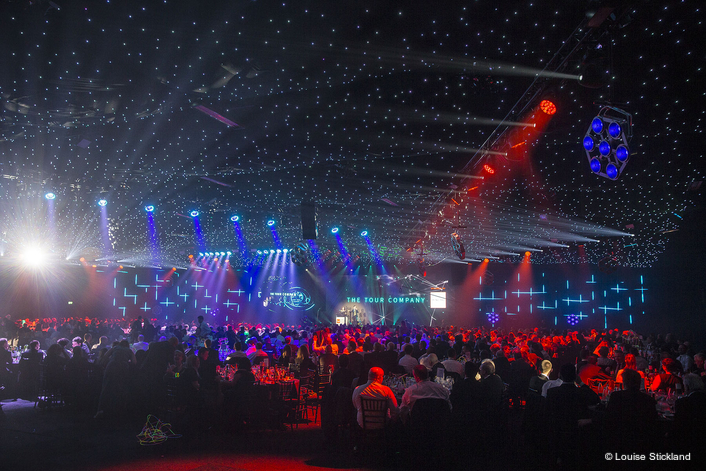 In addition to supporting the show, Robe’s UK and International teams and their guests – occupying 7 tables - enjoyed a fantastic evening and Robe again sponsored the ‘Favourite Lighting Rental Company’ Award, which was presented by CEO Josef Valchar and won for the fourth consecutive year … by Neg Earth Lights.

The TPi Awards also remembered the too many ‘absent friends’ who departed in 2016 in a show stopping evening that was a fitting celebration to their incredible characters’, lives and contributions to the industry.

Josef Valchar stated, “We were delighted to support another amazing TPi Awards and catch up with so many friends and colleagues. The event continues to grow, develop and we are very proud to be part of honouring the companies, individuals and innovators who have so much passion, commitment and imagination … that are driving our industry forward.”