Robe for Reazione A Catena Series 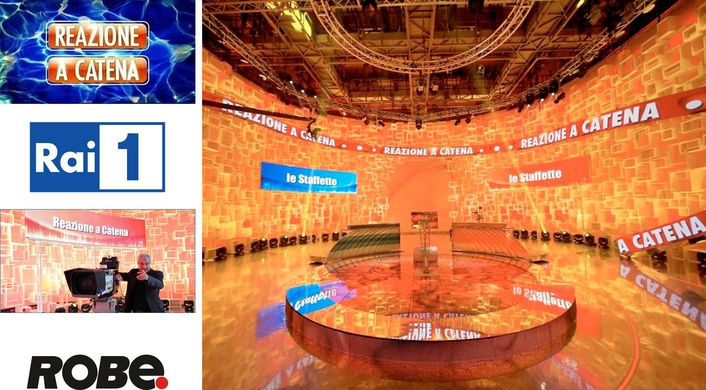 The show was recorded at RAI’s Auditorium HQ in Naples where Perrini lit the show for the second time, before which it was recorded in Rome.

The game is based on the association logic of words or numbers and allows viewers to test their intuition and mastery of the Italian language. Each episode needed to have a different look and flavour, on which Perrini worked closely with scenic designer, Marco Calzavara.

As each programme built up towards its final section the money stakes increased dramatically … and the lighting was integral to helping build the tension.

Perrini has worked for RAI for 27 years and has been using Robe products regularly in his work for the last three and particularly since the launch of the ROBIN Series in 2009. The ‘Ciack A Canta’ show was the first time he utilised Robe fixtures back in 2010, and he has not looked back!

The LEDWash 600s were used for washing the stage and playing area, the striking mirrored set elements around the audience and also extensively for highlighting the audience itself.

The LEDWash 1200s were also used on the ground for producing a uniform cyclorama wash around the back of the curved playing area.

The DLXs were used for throwing effects onto the audience and for back beam looks in the reverse camera shots, as well as for fast movements during the final game as the pressure builds.

The DLSs made excellent key and back lighting for the competitors onstage, achieved very precisely using the framing shutters.

Perrini particularly likes the additive RGBW colour mixing system in all these fixtures which means you can create every imaginable colour and variation thereof.

The quality of the pastels is excellent, “So the cameras can read all of them easily,” he reports. “And they are all uniform colours across the different types of fixtures, so I can create a truly colour-balanced picture”.

Another aspect he appreciates is being able to see the colours throughout the whole beam – which is due to the high quality homogenised light engine – this is something that Robe has always been passionate about in their LED fixtures.

With all the moving lights in the studio being LED, it brought a significant energy saving and heat reduction – less AC was needed to keep the environment at a pleasant temperature for everyone working there … all in addition to them helping to create excellent visual looks.

The LEDWashes, DLXs and DLSs are also a lot brighter than their equivalent discharge fixtures, and Perrini likes the intense saturation of the primaries and secondarys, particularly at the warm end of the spectrum.

“The LEDWash definitely changed my life when it came to lighting shows,” he enthused. “I am loving the light weight and the small size and the fact that it’s so much more manageable”. Less trussing is needed, it can be of a lighter weight, the rigging can be more straightforward, it goes up faster and has all the other associated advantages of ‘smaller-brighter-lighter’.

The Robe fixtures for the series were supplied by rental company AMG from Rome.
The lighting operators were Alessandro Piccolo (white lights) and Luca Alvino (coloured lighting) - both used Compulite consoles.