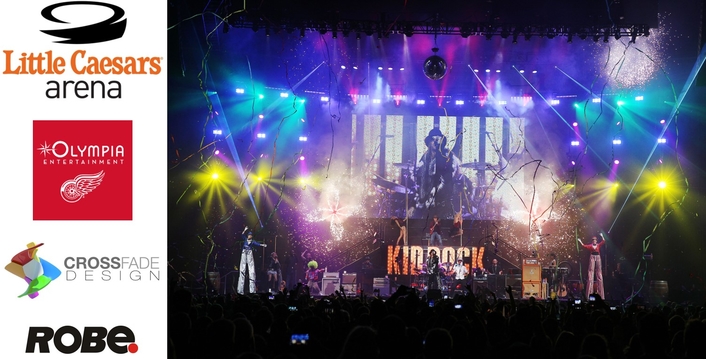 The brand new Little Caesar’s Arena in midtown Detroit is a 15 – 22,000 capacity multipurpose venue and home to the NHL’s Detroit Red Wings and the NBA’s Detroit Pistons. The venue will also be used for a wide range of concerts and events serving as the cornerstone of a new sports and entertainment district in ‘Motor City’.

Robe’s BMFL Blades and BMFL WashBeams were specified as a major element of the house lighting rig by Eric Wade at Crossfade Design LLC who was part of the venue’s project leadership team and designer of theatrical lighting and video projection.

He and his Crosssfade Design team – Jason Robinson, Michael Nevitt and John Early - also coordinated the installation and programming of the new lights, and will be brought in to assist with projects, working alongside the venue’s producer and director of events, Pete Skorich.

With long throw distances involved - between 100 – 200 ft., Eric and his colleagues wanted the brightest possible fixtures with the best optics and the most flexible future sets … and that’s why they chose 36 x Robe BMFL Blades and 24 x BMFL WashBeams, together with other lights. 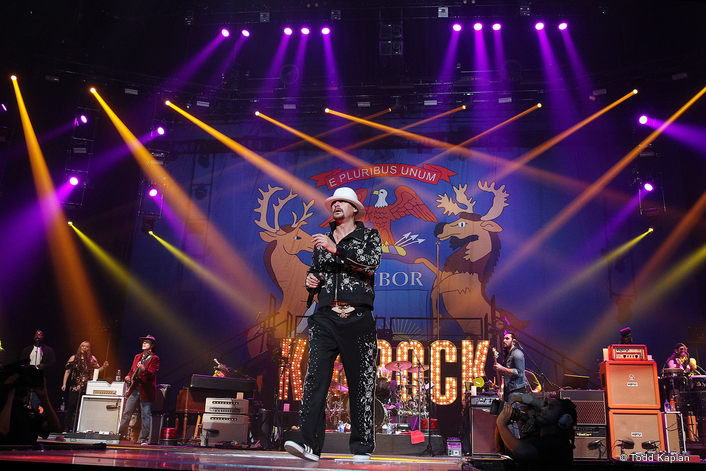 They also chose Anolis ArcDots, 450 of which are mounted on the tensioned wire grid covering 80% of the ceiling and combine with 1,700 LED strips for a vibrant, dazzling environmental effect which looks cool and is a fantastic atmosphere builder.

The BMFLs Blades are around the perimeter of the ice (for the ice hockey events), with the BMFL WashBeams rigged in the high corners of the building, all trimmed at around 100 ft. above the floor.

They needed a luminaire with a framing system to work along the edges of the ice or basketball court and the BMFL Blades were perfect. “I don’t think there’s a comparable  framing system available in any other light,” Eric commented, adding that the framing is so fast  that it can be used as an effect in its own right.

The BMFL WashBeams are used for the same basic functionality with the addition of the massive extra throw, especially when in wash mode!

The ArcDots were selected by Eric and his business partner Michael Nevitt after looking at dozens of options! When they saw ArcDot - made by Robe’s sister architectural LED company Anolis - they realized instantly that this was THE fixture for the high-impact effect they wanted! “It had to be bright enough to read from 103 ft. and not get blown out by the 1700 LED strips … and they achieve these goals beautifully.”

Eric has used Robe fixtures for some time in this work and regularly specs Robe on his rigs for Usher, for whom he is the long term LD. 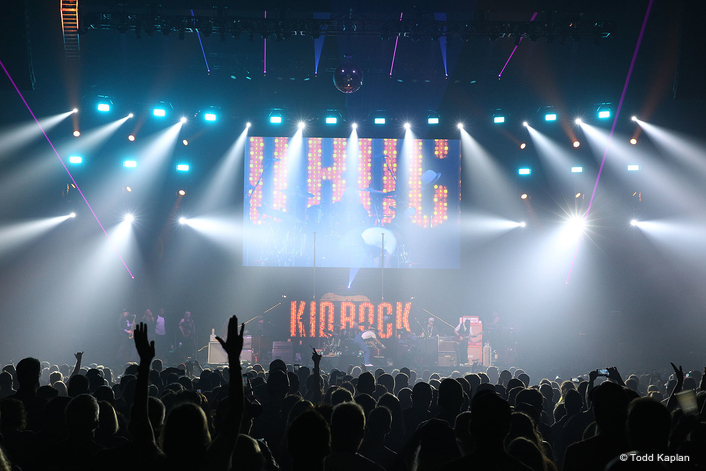 He feels Robe is “one of the leaders in our field right now” and that the reputation for reliability is also a huge factor when specifying gear for a venue like this. He added that he enjoys the personal touch from Robe, something rarely seen from manufacturers now, and mentions that getting support for designs is also invaluable - scenarios like getting demo units in front of clients – often at very short notice. He is ALWAYS grateful that someone will answer the phone at Robe North America no matter what time of the day or night.

He also enjoys the designer gatherings where experience, feedback and opinions can be shared and discussed. “Robe is definitely listening to designers and creatives, and I believe this is paying off in the products that are being released each year.”

The Arena’s moving lights are used for all the Pistons and Red Wings games and for other sporting events like WWE, where they are added to the visiting production rig. They make a massive difference to the look and feel of the arena, really bringing it alive and really enable the audience to connect more with the action through being properly lit. 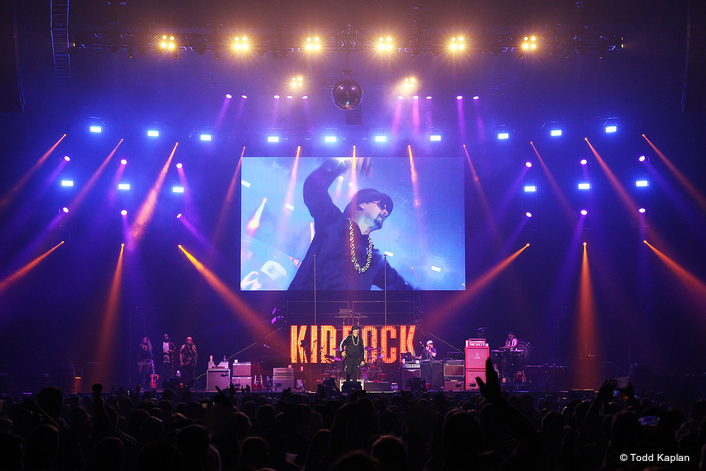 Designing the system from the outset to be as flexible and friendly as possible was a smart move in making it seamless for visiting shows and productions, allowing them to easily light the audience for broadcasts, recordings and streaming events, while the ArcDot and LED strip ceiling feature is an artwork in its own right.

His lighting and visual designer Nook Schoenfeld incorporated the house BMFLs into their lighting rig to ensure fans received an even more spectacular show.

Eric visited rental company Upstaging with Nook ahead of the Kid Rock shows and they programmed the lighting building blocks together so Eric knew exactly what Nook wanted out of the house fixtures he used.

Apparently when Nook relayed the news to ‘the boss’ that he could use the arena’s BMFLs as part of their production, the reaction was “if you’re going to use those bright-ass lights then I want them moving, strobing, flashing and flipping colors ALL night … I want to see my people and turn the whole arena into a party instead of just the one end like normal.” 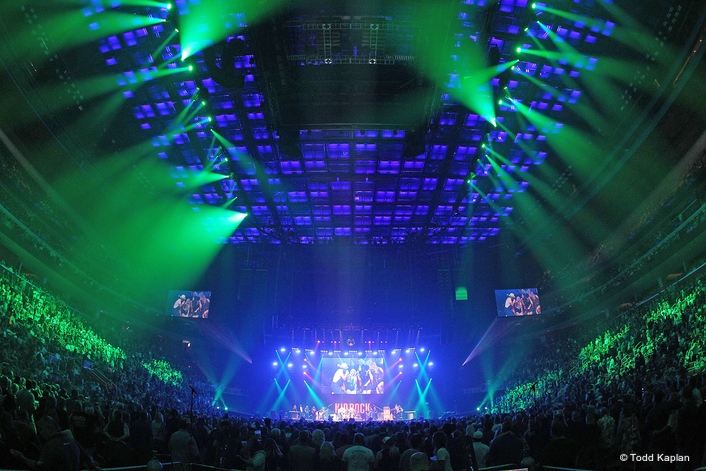 So … having his instructions from the very top … Nook kept the BMFL Blades running in a series of spectacular movement chases all night.

The BMFL WashBeams in the corners, he used as “excellent” aerial gobo projectors which looked stunning and dramatic on camera. “Twenty fixtures could wash out the entire bowl – floor and lower mezzanine levels – by themselves,” enthused Nook, also stating that he loves the gobo set in the BMFL WashBeams.

Nook added 17 x Robe Pointes to his own production lighting rig that were supplied by Upstaging. His budget had to include all the visual effects – lighting, video, lasers and pyro - so he made a conscious decision for these shows to choose a hard-edged fixture without CMY color mixing so they could slice through pyro and lasers when needed. Once he’d made that creative call … Pointe was his “beam light of preference.” 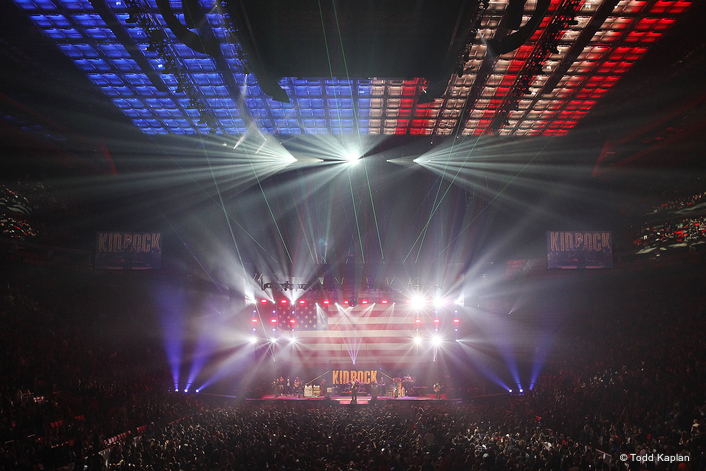 He likes the way Pointes move and thinks that the great zoom gives the Pointe the edge over other fixtures in that class.

Having recently seen the MegaPointe demos, he’s now hoping he will be able to use these “totally badass” lights on Kid Rock’s 2018 tour. … so we will watch THIS space!