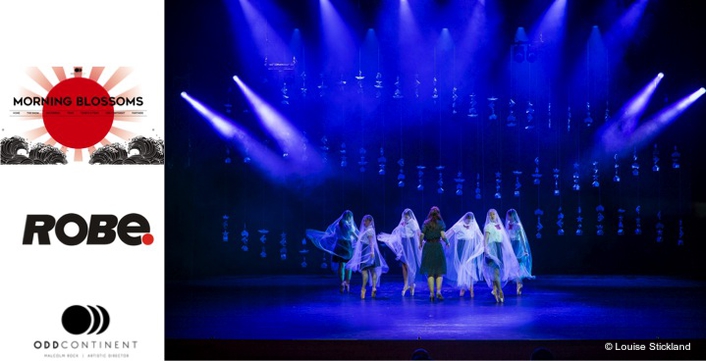 ‘Morning Blossoms’ is an extraordinary and breathtakingly beautiful ‘Brave New Musical’ produced by ODD Continent, fusing the disciplines of opera, ballet, dance, music and drama  in a compelling performance about parents, children, families and communities separated by natural disasters.

World premiered at The Spiegel Theatre in Zwolle, Netherlands, the action starts on March 10th 2011, the day before the 9.0 Mw earthquake off the Pacific coast of Tōhoku which triggered devastating tsunami waves up to 40 metres high sweeping up to 10 Kilometres inland, annihilating large areas of Japan’s East Coast and claiming over 15,000 lives. 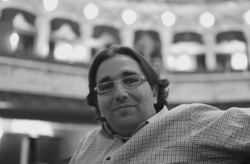 Acclaimed international lighting designer Yaron Abulafia was an integral part of the talented creative team who have helped deliver the piece directed by Malcolm Rock, and he chose an all Robe lighting rig to help sculpt the drama and the intense range of emotional, atmospheric and locational scenarios.

…Abulafia has a genius for transforming a bare black stage into a mysterious world where bodies materialise out of nowhere and vanish at will. Get him to light a wedding and you’d think you were watching The Rite of Spring.” (The Telegraph, UK, by Louise Levene, 8th June, 2012) 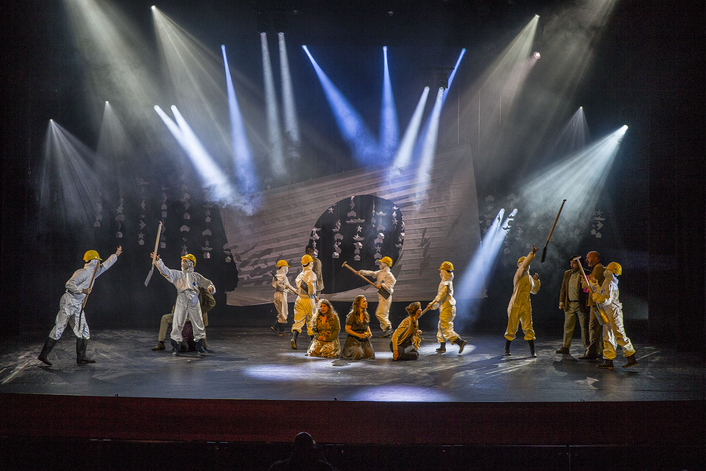 Luminaires included DL7S Profiles, DL7F Washes, DL4S Profiles, BMFL Blades and BMFL Wash XFs, Robe Strobes and Spikies, all pushed to their limits during programming to unfold a story inspired by sensitive and difficult subject matter in an appropriate and uplifting way.

Says Yaron, “Using these luminaires really allowed me to sculpt the light (in the hazy space) exactly as I needed to achieve very complex and intricate cues, often combining 6 or 7 different parameters to be programmed independently. It has been an incredible and interesting journey lighting this show with these amazing tools”. 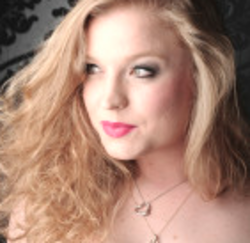 Amazing new music composed by Chloé Charody was played by the 40-piece Dutch Symphony Orchestra conducted by Tecwyn Evans with movement choreographed by Remi Wörtmeyer. A choir added to the sonic richness, sheer scale and layering of the piece.

Yaron is known for his innovative and considered approach to lighting. He knew he needed to work with the highest quality fixtures to deliver the precision and depth he wanted to help engage audiences.

He had been wanting to use Robe’s refined DL7 LED range in a production for some time, and this was a perfect opportunity to specify these designed-for-theatre fixtures as the leading ‘base elements’.

Thirty-three DL7S Profiles, 17 x DL7F Washes and 8 x DL4S profiles were distributed on overhead LX bars and on side booms.

The DL7Ss were arranged in four rows on the over-stage bars and used extensively for multi-tasking – from projecting colourful patterns onto the stage for the classroom, playground and picnic scenes for the first half, filled with playfulness and joy; for the destruction and chaos of the waves during the tsunami to the raw, visceral surreality, strangeness and sinister calm of the aftermath.

As music dropped away to dialogue throughout, quiet lighting without cooling system noise was essential … and the DL series was “Perfect”. 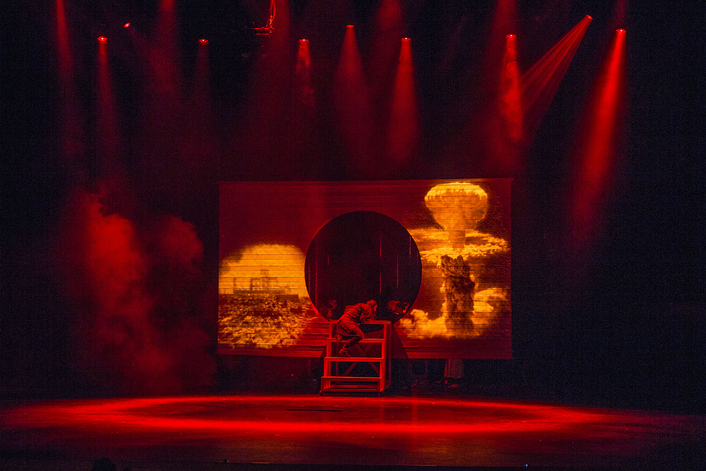 The orchestra had no noise issues and even the hyper-sensitive ears of conductor Tecwyn and sound engineer Rene Botman were happy with the silence of the DLs.

“The DL7s are amazing performers” continues Yaron, “The optics are incredible and the shutters are really precise and reliable thanks to the 16-bit control which enabled us to light tiny objects on the stage in really close proximity without a single lumen of spillage”.

He added that the colours – the whole range – from the purest saturates to all those challenging pastel hues - browns, ambers and lavenders, etc., where so many LED products struggle  … “are so impressive in the DL7. You can get exactly what you want”.

Many of the cues combined simultaneous 5 or 6 different effects. For the earthquake the DLs are shifted using several different options - random intensity, rotation, shutter cuts, blade movements – all in different combinations, running at different speeds and producing the disorientating perspective illusions of fear and uncertainty. 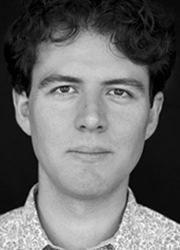 While the DL7s worked hard creating base lighting and specials, the BMFLs – of which he had 13 x BMFL Blades and 4 x BMFL Wash XFs – were also real workhorses.

Four of the blades were rigged over-stage on drop arms to give them a clear path to project custom tree-branch gobos – some with cherry blossoms - onto a front gauze for the walk-in and interval.

Using just five BMFL Blades on an advance truss in front of the stage – the fixtures are so light that this was a run of mini-beam truss - enabled Yaron to replace two whole bridges worth of what would normally be around 40 conventional sources provided by the venue.

So apart from being hugely quicker on get-ins and massively reducing the focusing time … he was in control and had the front light he wanted with the scope for a huge amount more than would have been possible using house conventionals.

These front BMFLs do lots of shutter work, dimmer effects and colour changing – and with a throw distance of 22 metres to the back of the stage at the Spiegel Theatre, they were plenty bright enough.

The BMFL Wash XFs were positioned in the upstage corners and used for specials and also to wash the whole stage area.

Towards the end of the performance 12 overhead DL7F Washes are used to create an incredibly small dot of intense primary red light on centre stage while 15 x DL7S Profiles project a smoky texture via subtle application of the animation wheel – the little red dot slowly broadens to become a large red 7 metre wide ring consisting of 12 thin rectangles (created by using the scrim effect), and softened by the frost filter. Simultaneously, a glass gobo of the atomic mushroom cloud is projected onto the scenery and the projection is enlarged by pulling the zoom out.

These and numerous other examples are what Yaron means when he refers to ‘sculpting’. 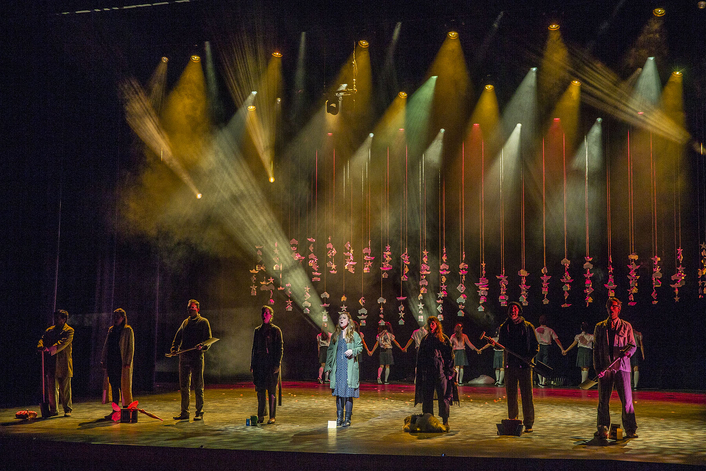 He and programmer Bas Berenson experimented with many different ideas during their programming sessions which included two and a half days in Cue 1 Studios’ WYSIWYG visualisation suite in Amsterdam, and a long and concentrated week on site at the Spiegel Theatre.

The eight DL4S Profiles were in the low ‘shin-buster’ positions on the floor in between the set legs, for providing focussed cross light which could be fine-tuned and shaped by adjusting the shutters and positions.

Above these on the same booms were eight of the DL7S profiles at head height – ideal for catching the upstage wall of hanging origami which is flown in and moved on three separate fly bars.

Fifteen Robe Strobes – the white version – are used to create the tsunami moment.

As the colossal waves consume everything in their path, the Strobes are a perfect illuminative metaphor – literally blinding the audience throwing them back in their seats with near physical effect – at the cataclysmic end of Act One.

They are on the floor concealed by gauze during the first act, revealed at the end and then struck in the interval.

As the post-tsunami world in the immediate aftermath emerges, the 10 Spikies are used to augment the torchlight in the first moments of the second act where individuals and search parties desperately trawl through the wreckage for signs of life … revealing the hope, optimism and strength of the human spirit. 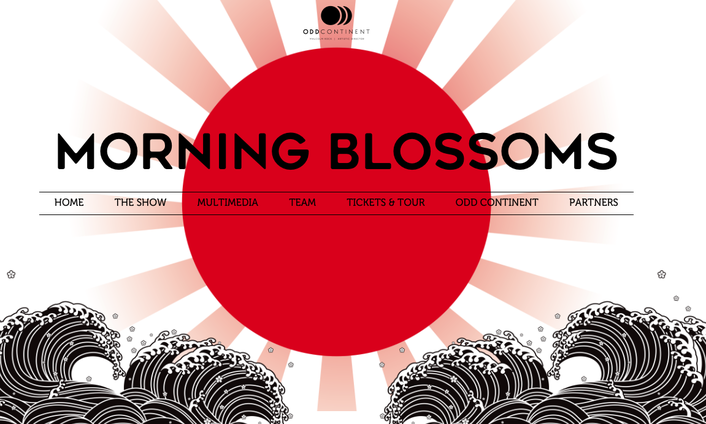 The production tours the Netherlands until the end of November. Please check http://www.morningblossoms.nl/ for full details.