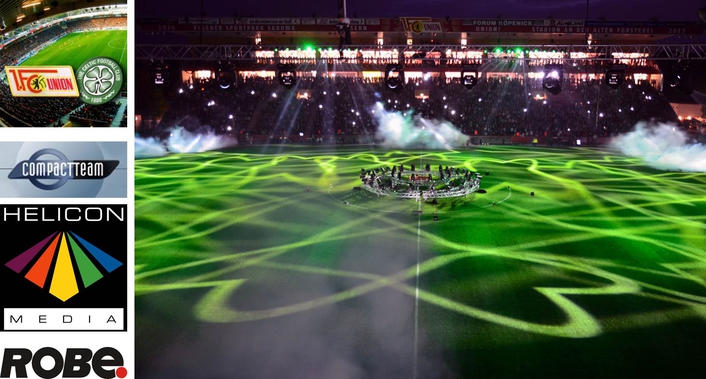 The 20 minute spectacle was creatively directed by Gerald Ponesky and  Uwe “Leo” Auerswald for producers the Compact Team, a Berlin based event agency and followed a friendly match with Scottish giants, Glasgow Celtic. It featured a jaw-dropping visual / set design and lightshow concept created by Gerd Helinski from Berlin based HELICON-Media – featuring 60 Robe MMX WashBeams – together with a special soundtrack compiled by Mathias “Matze” Mantzke.

It was a landmark moment for the legendary FC Union Berlin, popularly known as the "Eisern Union" (Iron Union). The club has a colourful and interesting history, an international cult following and a hugely devout and somewhat unconventional fanbase. Fans – offered the opportunity to invest directly in the club through purchasing shares – and  sponsors helped raise the finance for the new 3800 seater stand, which completes an extensive refurbishment of the stadium.

Helinski wanted to integrate the entire field of play into the theatrical production and his idea was based on three circles of trussing with 12, 10 and 8 metre diameters respectively, which could be rolled into the middle of the pitch rigged with all 60 MMX WashBeams, flame jets and various pyro effects. 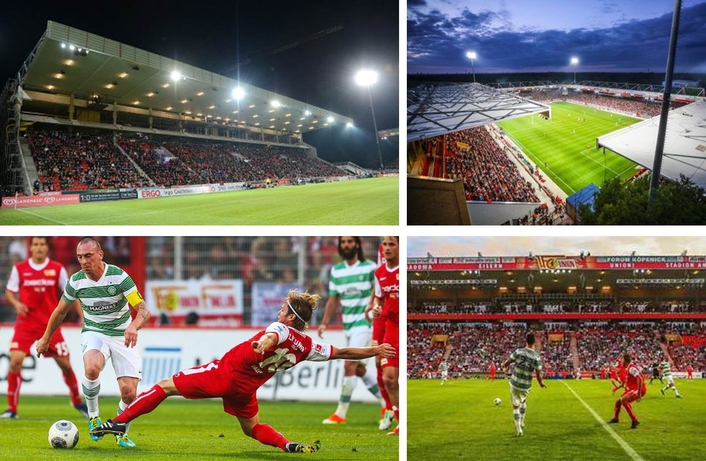 The custom trussing frames for the MMX WashBeams were constructed from  Prolyte H40V. They were deployed in a five minute timeframe by 12 very fit stage crew between the end of the match and the start of the show … who also had to ensure that the pitch was not damaged in the process.

Helinski chose Robe’s MMX WashBeam as a powerful and dynamic lightsource that could produce multiple effects including projecting across the grass, onto the new stand and all the other buildings around the stadium.

This ‘crown’ like lighting feature was right at the core of the high-impact show and absolutely vital to the aesthetics and drama of the piece.

He says, “The MMX WashBeam with its excellent photometric properties and wide range of effects - including the fact that it works equally well as both a wash light and a beam source – ticked all the boxes”. He was highly impressed during programming to see the clarity and power of the beams and the efficiency of the wash.

The lightshow – which also included 120 other moving lights positioned around the stadium – was programmed and run (to timecode) on a grandMA full size operated by Udo Timm. Helicon Media’s Project Manager was Stefan Krawietz and the lighting equipment was supplied by HELICON Media from Berlin-Schönefeld.

Helinski also collaborated closely with Frank Henning from Laser Performance GmbH to ensure that the show was an unforgettable and highly emotional experience for all those present, celebrating the success and amazing ‘people power’ values inherent in the culture of FC Union Berlin and its supporters.

Helinski has used Robe products in his lighting and visual design work for some time, which takes him and his company HELICON Media worldwide.

He’s found Robe to be a really robust solution for many applications and particularly since the launch of the ROBIN series of LED products in 2010, has used these in some of the toughest and most demanding environments and operating conditions.