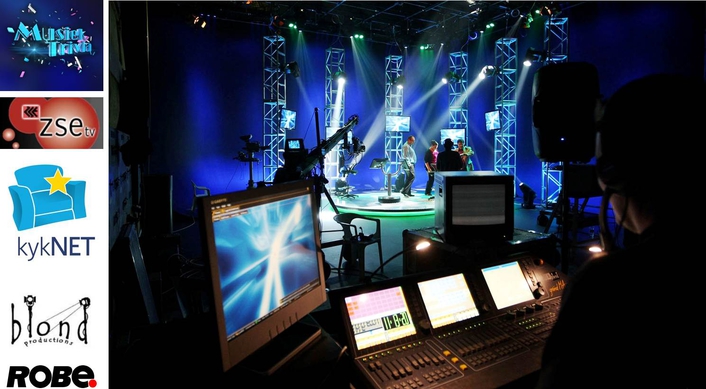 They were asked to come up with a visual concept for the show by presenter Johan Stemmet, having worked with him on several series’ of the popular music quiz Noot vir Noot for SABC.

Musiek Trivia features two contestants at close quarters in the studio facing each other off – Weakest Link style - and is fully focussed on the subject music trivia, encompassing specific eras from the 1950s to the present. It was vital to have some visual WOW factors for the show.

Overall this gave the depth and appearance of being a much larger space, simultaneously opening up some interesting looks and angles for the cameras.

Very prominent are six ‘totems’ vertical truss pillars, with the six ROBIN 600E Beams mounted near the top pointing downwards into the contestant area, together with12 MMXs, six on the trusses, and six  dotted around the floor shooting beams up into the celling behind the contestants.

The light weight of the fixtures was a great asset in this situation.

Rieck explained that as Musiek Trivia is a show with substance it required plenty of attention to details - an old-skool approach to lighting in many ways. The requirement was to create a definite mood, drama and feel rather than provide flat, clinical lighting for TV.

It also moves quite fast, so he was kept on his topes with the cues! The Robes and other lights involved were operated via a grandMA console.

Centurion based Blond Productions was one of the first South African Companies to invest in Robe’s new MMX Spot, and in the last six months they have been out constantly on  numerous projects including ‘Big Brother Africa – Stargame’.

Ballot says that they really like the intensity and the dynamic effects offered by the dual animation wheels, “It’s an awesome, very reliable product,” he confirms.

Peter Rieck first saw the MMXs in action at last year’s Mediatech exhibition, and immediately knew they were a ‘must have’ for Blond’s inventory. These were all supplied via Robe’s South African distributor, DWR Distribution.

He used the 600 Beams of full brightness for Musiek Trivia, and found both types of fixtures were ideal in combination with the various LED elements around the studio.

Apart from this latest investment, Blond has been using Robe products for many years with great success. On their varied range of shows and events, which include corporate presentations, TV productions and live events of all types.

The first series of Musiek Trivia is currently being broadcast on Kyknet, DSTV.