.
Lighting Designer Tom Sutherland  - one of the UK’s emerging talents - utilised 60 Robe LEDBeam 100s to great effect on the 2013 X-Factor Auditions which were staged at London’s Wembley Arena.

Around 250 hopefuls gave it their all in front of the judges – each was allowed up to about 10 minutes of potential fame - in four very intense days during which they were ruthlessly culled to 100! These then progressed to the next stage – boot camp - of selecting the 12 finalists for the 2013 edition of the hugely popular reality TV series.

His lighting rig was based on several curved trusses at different levels.  The concept was to create one very dynamic lighting look which had to look fabulous – and appear different but complimentary - from multiple camera angles.
It was the first time he’d used Robe’s LEDBeam 100s on this scale and also the first time in an arena … for which they were absolutely fundamental to the aesthetics.

They were positioned on two rows of audience facing trusses flanking the stage wings and followed through with another two rows of LEDBeams running down the sides of the stage each side.

Two more rows of Robe’s handbag sized, super-bright LEDBeam 100 lined the two advanced trusses in front of the stage. The LEDBeam fixtures were pointed  into the audience. 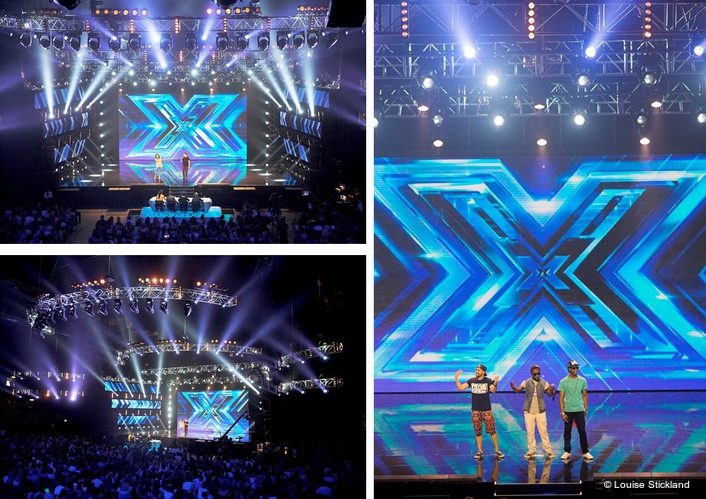 ‘I specifically used them to accentuate and amplify the apparent size of the rig,” explains Sutherland, whose clever piece of visual trickery worked a treat!

He chose LEDBeams because he wanted a fixture with a strong and powerful beam but that would also not be too dominant – the miniscule size of the LEDWash provided the ultimate solution!

“It was vital for the beams to look ‘fluffy’ rather than harsh,” he explained, “and they were perfect”.

He also wanted the trussing metalwork behind to be visible and having the LEDBeams in place helped achieve this effect as well.

The rig stayed static throughout the auditions and the lights were only moved for the big judge’s walk-on moment, for which the LEDBeams helped create lots of excitement.

He was delighted with the overall results. “They look gracious and elegant and enabled me to light everything really well with the clear definition that I wanted to bring out the trussing architecture.”

The lighting was operated by Alex Mildenhall using a CompuLite Vector console and all lighting for the Auditions was supplied by ELP. The gaffer was Craig Broughton and the Executive Producer was Mark Sidaway. Extracts from the audition section will feature throughout the next X-Factor series when it starts in the autumn.

Robe for Reazione A Catena Series
Size Matters for HSL At Creamfields
2013 MTV Video Music Awards Get The Pointe!