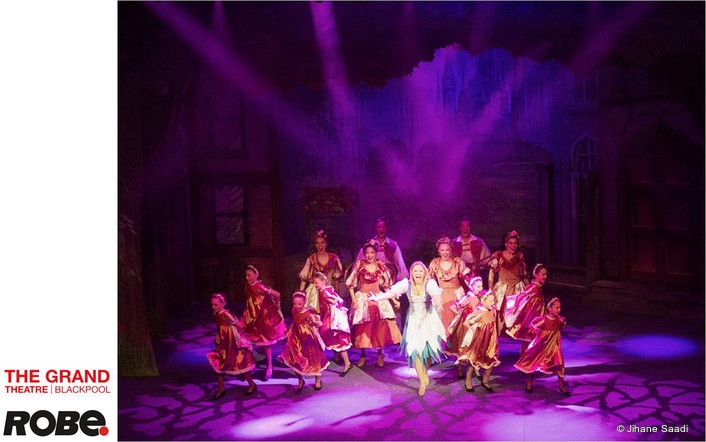 It’s the third year that Andy has been asked to light this popular panto for UK Productions. Returning to the same venue has some definite advantages he explains, both in terms of knowing the space and what you can and can’t achieve in it, and also having an ongoing relationship with the local crew and technicians.

As always, the challenge with pantos is having to do a massive amount of programming in a very short time to produce the intense, magical, high-impact visuals characteristic of the genre.

For the last three years, Andy had integrated more and more LED fixtures into his panto rigs and this year was able to reach the goal of lighting the entire show utilising LED sources, apart from 12 source 4 generics. 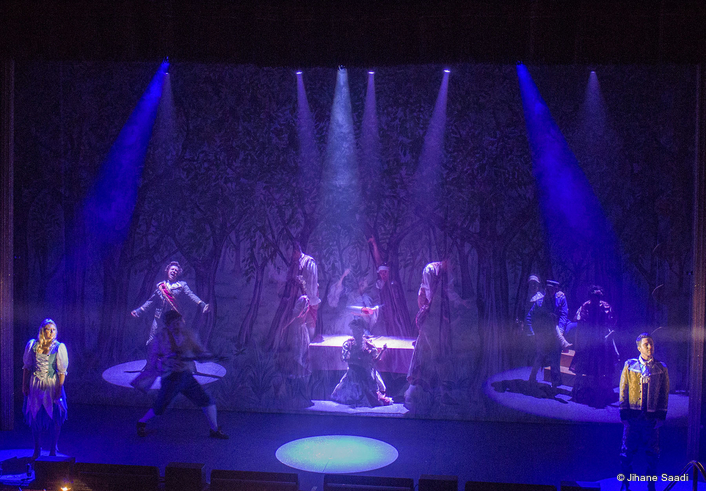 Two types of Robe fixtures were at the core of the design – the DL4S Profile and the Spiider LED wash beam, of which there were 10 each.

Due to the tight stage and wing space at the Grand Theatre, an original Matcham designed venue opened in 1894 and now Grade II Listed, the set - developed by the UK Productions’ creative team – incorporated numerous flown cloths as well as four full stage scenic sets, flown practicals like chandeliers, two star cloths, over 3000 white dimmable Xmas lights and two real white Shetland ponies pulling Cinderella’s crystal carriage ... so there was a lot of action to light!

The Spiiders and DL4Ss are distributed on LX bars 1 and 2, with a pair of DL4S Profiles also at FOH.

The DL4S Profile is one of a range that Robe has developed specifically for theatre applications with all the necessary features, and on this show their primary tasks are to texture the stage and scenery. The FOH DL4Ss are used for specials and other pick-ups … their refined shuttering was essential for this and also useful for the precision framing of objects onstage. 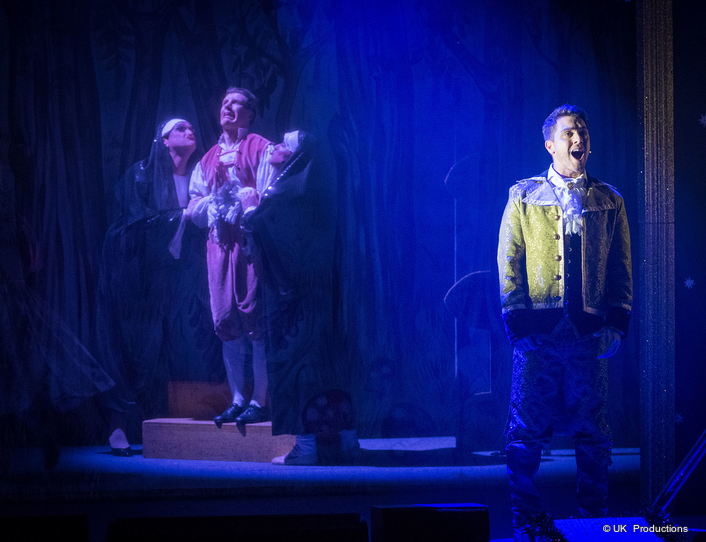 During the overture, they are used to pin-point areas of text from the first paragraph of a Cinderella storybook appearing on the front curtain, and they follow the text as it is read out by the narrator.
In fact, just in the first minute of the show recalls Andy .. there are 39 lighting cues! 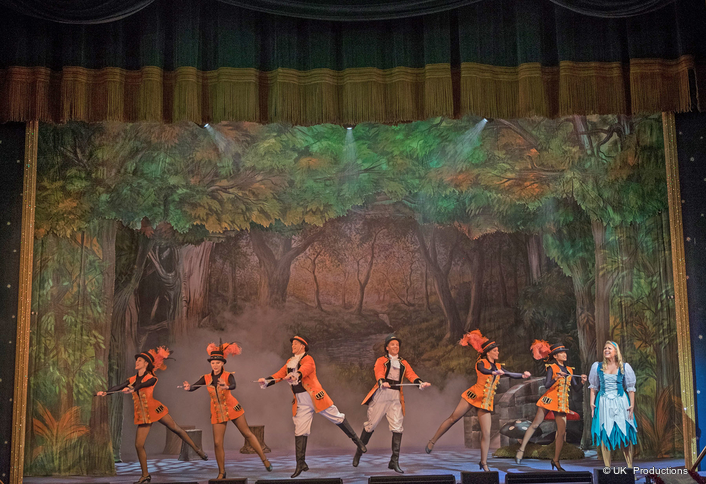 This storms straight into the production number ‘Somebody to Love’, which has 68 LX cues including the DL4S’s spotting from the front positions and silhouetting from behind through a gauze which is also in for the first part of the song. All through, they are really essential to the rig with their endless colour options and exceptionally smooth dimming curve.

The Spiiders are the main wash lights and replace literally dozens of 1K fresnels on a ‘traditional’ rig which would usually be on LX 1 and 2 and dotted around the FOH galleries.

The zoom is “amazing” states Andy, “together with the intensity, the fantastic range of colours and being able to do both wash and beam work with the one light.”

That’s before he’s even touched the flower effect! He can texture the whole downstage area with the DL4Ss and then kick in with the Spiiders for enchanting ethereal effects when the fairy appears. “The Spiider flowers bring a real gobo-like feel to the rig … but are totally different”.

The rest of the rig includes Robe’s PARFect 100s and PARFect 150s which were used for side booms and from FOH as well as for texturing the pros arch. 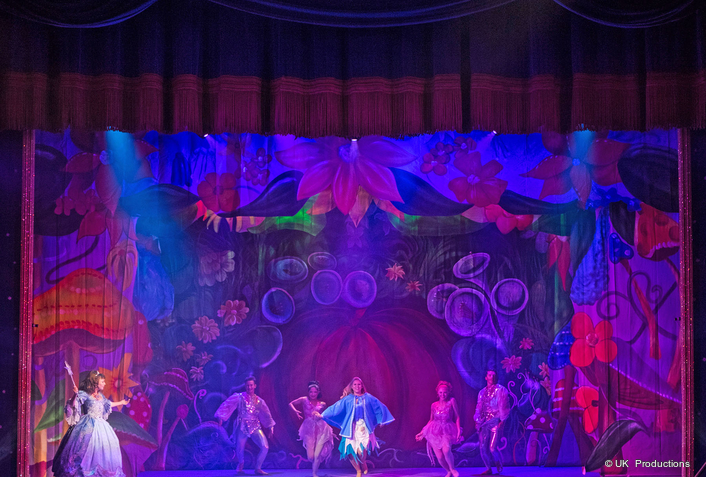 Two VIVA CMY LED profiles on the pros arch truss produce excellent beams and are also used for pick-ups onstage, swinging out into the audience for the many interactive moments, and they are also used for the magic scenes and as distractions during the scene transformations. They really are properly ‘multi-use’ in this production.

Spikies are positioned downstage left and right on the stage apron for classic up-lighting effects as well as shooting out into the audience and also blending in nicely with the Spiiders when in flower mode.

Four CycFX 8s are along the stage lip and flip back and forth to very efficiently illuminate the stage cloth. They also beam into the crowds to boost the energy for the musical numbers and are used for general eye-candy duties.

A pair of LEDBeam 300s are rigged on the pros arch bars, providing side key lights for when the apron is in use, and next to them are a pair of PARFect S1 60K and 27Ks giving warm and cool white side key lighting options, which is very handy for head-height pickups. They are replacing what would have been profiles in a conventional panto set up.

Andy was assisted on the programming by freelance production LX Shaun Ellis. It was a learning curve for Andy working ponies for the first time and taking their likes and dislikes – like not stepping into shadows – into account.

It was also the first time he’s lit a Cinderella. Over 300 lighting cues were developed and programmed during an intense 30 hour period, much of it also with other things going on around them like set pieces being constructed or other parts of the performance being rehearsed. 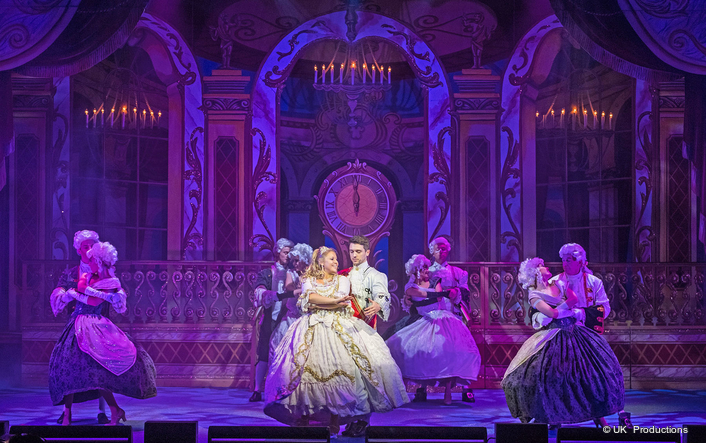 The Robe kit is being supplied to the production by CEG Hire & Productions from Cambridge and Robe UK, with the Grand’s house LX crew running lights day-to-day for the 52 performances utilising an Avolites Tiger Touch II console.

“I was delighted to be back at the Grand and working for UK Productions and the fantastic house crew,” commented Andy. “I am really impressed with the performance of all these Robe LED fixtures, they have been great for creating all the magic and illusion needed for panto! The timeframe certainly galvanised all of us, but everyone has pulled together to create a show of which we are proud”.