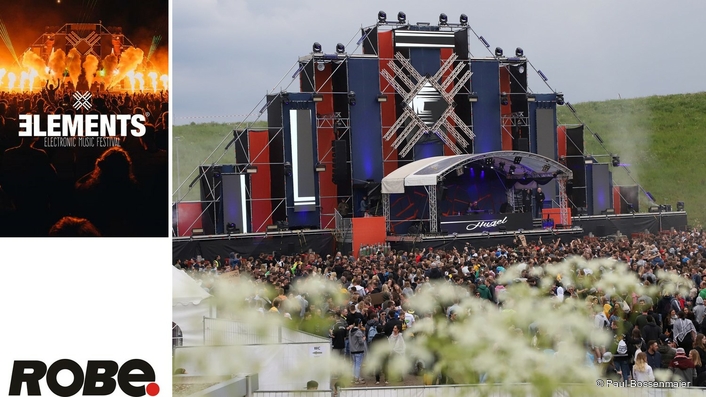 Robe’s new IP65 rated iPointe moving lights were prominent among lighting fixtures on the main stage at this year’s Elements Festival, a 2-day showcase of great vibes and fabulous house music - techno and tech house to future house, hardstyle and EDM - in a beautiful amusement park at Dormettingen, 80km southwest of Stuttgart, Germany. The festival is staged in a picturesque environment landscape and built on a former mining area, complete with its own artificial lake and beach. The event features three vibrant stages of music and is known for its high production values.

Lighting for the main stage – located in a natural amphitheatre-like dip in the topography – was designed by Raphael Herrmann whose company Prolite Event also co-ordinated the supply of the lighting kit which included 8 x Robe Pointes and 16 x LEDBeam 150s as well as the 22 x iPointes, plus some other lights.

Raphael has lit the main stage since Elements Festival started five years ago and has been involved in designing and supplying lights and running his own associated business since 2000 when he was aged 18. 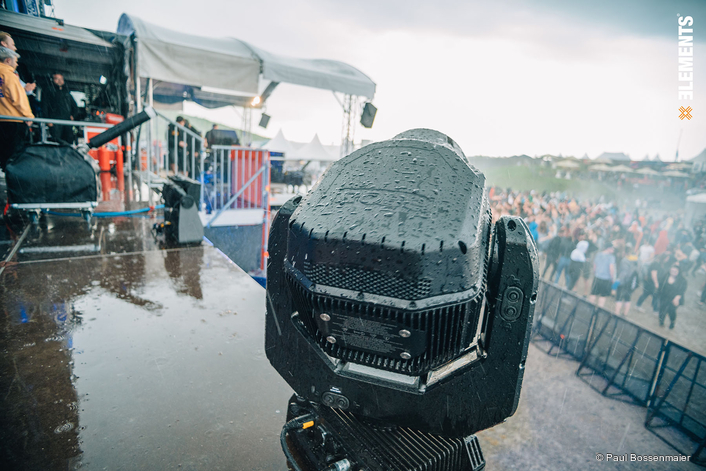 Being dance / DJ orientated, the Elements stage set-up was different to a standard rock event. The set was also designed by Raphael and featured a 35-metre-wide pyramid structure, which was supporting striking columns of LED, with a large scenic / LED event logo sign in the centre upstage and above the DJ riser. The highest point of this back wall was 14.5 metres.

An overhead canopy provided immediate weather protection above the DJ, but the main structure was completely exposed to the elements.

Other challenges included lighting for daylight … as only the final acts of the two-day event each night played in full darkness, so Raphael needed high output fixtures that registered in daylight and were weather resistant.

Realising that iPointes would be perfect for all the uncovered positions on the stage, Raphael utilised 22 luminaires which were rigged to the top of the LED structure at the back and positioned on the deck and in front of the PA wings … all completely in the open.

Other challenges included lighting for daylight … as only the final acts of the two-day event each night played in full darkness, so Raphael needed high output fixtures that registered in daylight and were weather resistant.

Realising that iPointes would be perfect for all the uncovered positions on the stage, Raphael utilised 22 luminaires which were rigged to the top of the LED structure at the back and positioned on the deck and in front of the PA wings … all completely in the open. 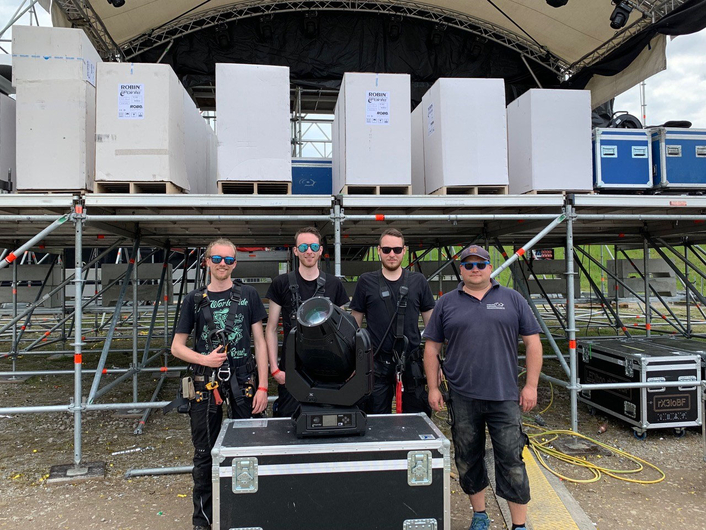 The volatility of the weather didn’t disappoint, as bouts of sunshine were regularly interspersed with violent downpours of rain … and the iPointes were put to the test!

Due to the shape of the design, “They were the main light to carry the show” said Raphael, “giving those huge super beam looks and mid-air effects that are so important for dance music festivals.”

The standard Pointes were centrally above the DJ booth below the canopy roof and proved an “ideal” complement to the iPointes, allowing numerous effects that could fill the black hole immediately behind the lower central area of the DJ booth.

Raphael has been using Pointes for a while in his work and never grows tired of their multifunctionality, excellent beams and mid-air effects.

Eight LEDBeam 150s were tucked away behind the DJ on the main stage, and another eight were spec’d for the Lakeside Stage where they were also the primary backlight for the DJ. 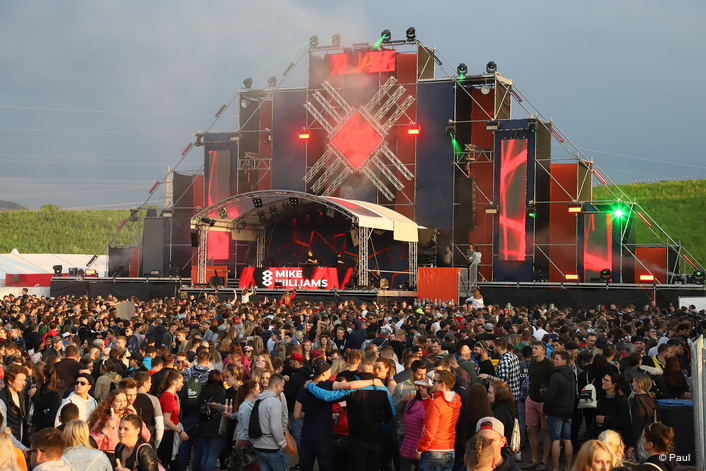 This was the first time that Raphael had used the iPointe, a brand-new Robe fixture that has just gone into production. It’s been developed following the massive success of the standard Pointe for dance style events - Robe’s R ’n’ D team realised that a complimentary water-resistant version would be an asset for outdoor shows and seasons, so the product was launched earlier this year.

“The large zoom range is incredible” enthuses Raphael, “it opens up incredibly wide!” Also helpful were the high output and the rich colours. “It’s simply a great extension for outdoors and we do not need to use domes which can sometimes have distracting reflections!” 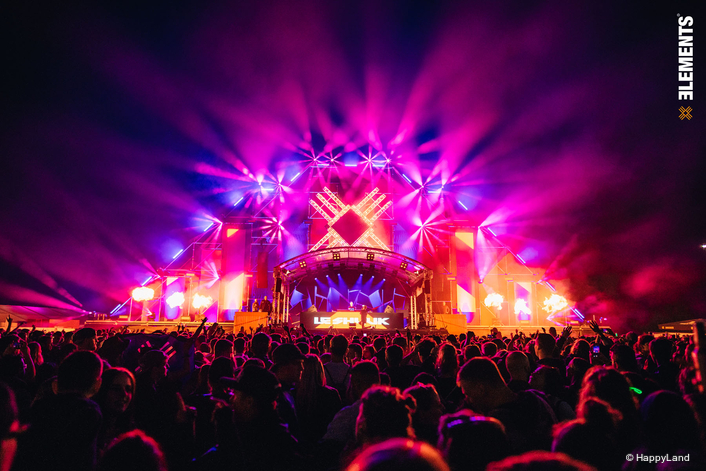 Two lighting operators ran lights for the Elements 2019 and both were also suitably impressed with the iPointe.

Sebastian Seibert commented: “They are definitely in a class of their own in terms of powerful, bright and well-engineered IP rated spotlights. The incredible zoom range is wicked for EDM!” 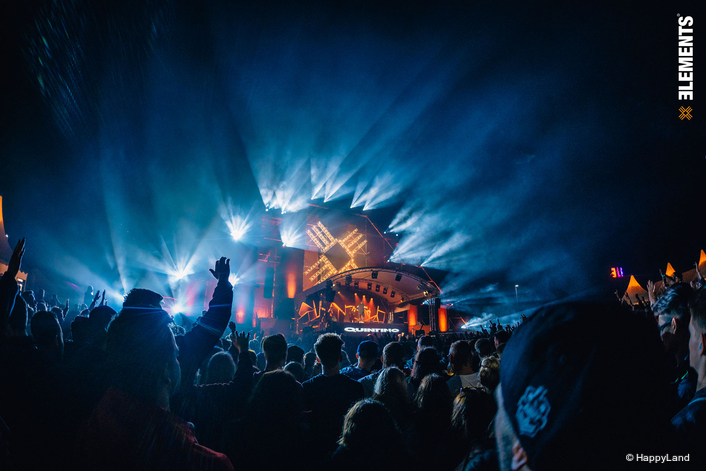 Dennis Hertrich agrees: “The beam power, even at a great distance, is amazing and you can still clearly see the beams piercing the sky. The IP protection saves us serious amounts of work on site in not having to use domes etc.! The effects are great, the choice of gobos is perfect! In summary, it’s a super package! As with virtually all Robe fixtures, they work immediately ‘out of the box’ and are properly reliable!”

Some of the event lighting kit was cross rented by Raphael from NicLen. Marcel Bognar built the set and co-ordinated the décor, video was operated by Marc Schuler and the event was organised and hosted by Happyland GmbH.