Albert 1 was a new and ambitious musical produced by Simon de Merode and staged around and on a series of pontoons floating on the moat of the magnificent (old) Westerlo Castle in Belgium, which has been the family seat of the House of Merode for over five centuries.

Lighting designer Michel Jacobs – who enjoys lighting off-beat and idiosyncratic shows and interesting site-specific works – was asked to light the production which played to 1850 people a night, sold out for over two weeks. He chose a completely Robe moving light rig to give the flexibility needed to deal with the challenges of the location and the complexity of the production.

The musical followed the story of Belgium’s hugely popular “King Soldier” Albert 1 from his accession to the throne in 1909 to his untimely - and some claim mysterious - death in 1934 aged 58 in a mountaineering accident at Marche-les-Dames. Simon de Merode is also a prince in real life and a member of the Merode family, one of five dynasties that has dominated the Belgian high aristocracy from the 14th century onwards. Since 2006 he has assumed responsibility for the renovation and upkeep of the fantastic Westerlo Castle heritage site.

Michel has worked on the site before lighting a musical about Marie Antoinette, but not with the stage partially on dry land and water as was the case this time. He’s also worked with director Luc Stevens on various projects over the last five years.
As soon as the site was decided, the large performance space was established covering around 150 metres in width and 100 metres in depth … so Michel knew immediately he would need some very powerful lighting fixtures. 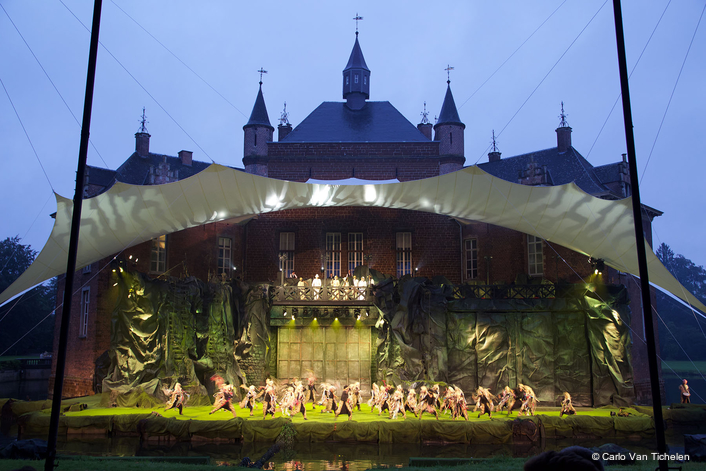 He chose 20 x Robe BMFL Blades as the main fixtures.
“I approached lighting the work with a bit of a rock ‘n’ roll attitude” he explained, “I knew I needed lots of power and although it’s essentially a theatrical show, I needed lightsources that could hold their own in a stadium concert!”
He added that he’s also seen rock shows with double the amount of fixtures on stages a tenth of the surface area of this one!

Dealing with the width of the stage and also encompassing a partial roof canopy that revealed parts of the building at the back was the big challenge because in addition to the brightness, he needed the “precision and accuracy” of the BMFL Blades, which were rigged on front lighting gantries at the back of the audience tribune.
The focusing had to be spot on, and he needed to shutter off any unwanted lighting or spillage – which could potentially be quite a lot over those distances.
The set included a large mountain, which fulfilled multiple different locational roles in the narrative as the action unfolded.

He’s used Robe fixtures frequently in his work and earlier in the year, BMFL Blades and DL4Ss were spec’d for “De Groote Rappel” an outdoor musical drama located in an army barracks in Leopoldsburg.
Back at Westerlo, the BMFL Blades were used in just about every cue of the show, and their multi-functionality was very helpful at other times as well – including the intermission – where six Blades were able to light some of the immediately surrounding scenery of the castle and its gardens, rather than needing any separate wash fixtures to do the job. 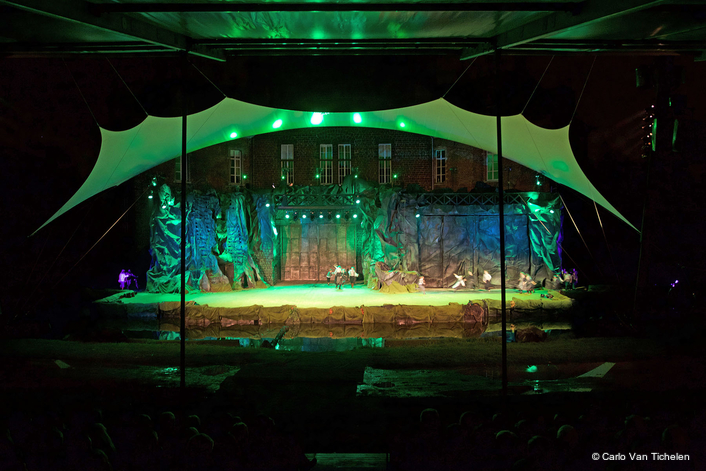 Apart from the brightness, Michel likes the CMY colour mixing of the BMFL Blades and also the gobos.
Twelve ROBIN 300E Spots were used to add light, colour and texturing to the roof canopy, and some positioned around the floor arear at the front created the dramatic shadows that characterised the war scenes.
Ten LEDWash 600s added general stage lighting and atmosphere.

Four Pointes were used as FOH follow spots. With the frost filters inserted, Michel found they were a perfect solution to provide ‘soft’ highlighting. “They were great – even from a long distance – for this task and picked out the principals and solo singers appropriately in the context of how the rest of the stage was lit”.
Pointes also assisted in creating gunfire effects on the mountain for the war scenes.

Lighting the show was dynamic in that Michel had to amalgamate several styles from Hollywood to Broadway, encompass grim and dramatic war scenes and light anything from full stage big production numbers to intimate monologues.
All the lighting equipment was supplied by Meerhout based rental company Demon with which Michel works closely, and all the logistics and crew were co-ordinated by their project manager, Dominic Marien.