Robe Helps Slovenia on its Way to Eurovision

It is Eurovision selection season … and one of the 43 hopefuls for this year’s event in Kiev, Ukraine, in May is Slovenia’s Omar Naber whose song “On My Way” was chosen at a spectacular Eurovision Melody (EMA – Evrovizijska MelodijA) show staged in Hall A2 of the Gospodarsko Razstavisce exhibition centre in Ljubljana.

Crt worked closely with set designer Greta Godnic to create a striking visual environment for this high profile show, which was broadcast live on Slovenian national TV in 3 parts – two semi-finals and a grand finale – each attended by a live audience of around 1000.

Crt is one of the country’s leading LDs and gets involved in many of RTV’s (Slovenian National TV) largest and more complex shows.

When Greta and Crt were initiating the designs, they wanted to involve the whole room in the show rather than separating the stage and set from the venue. One big harmonious performance space was a key aesthetic goal.

Then there had to be enough variety on the lighting rig to create unique settings for each artist. For Crt, once the overall design was in place, the programming process started by familiarising himself with the music for each performer, then drawing up some basic atmospheric instructions. These were pondered for a day or so … after which an intense period of programming started.

With this show, while there was a reasonable amount of time on site, that is never enough, so Crt did plenty of previsualisation, allowing him to come to the expo centre prepared with most of the basic lighting building blocks. Then it was a case of finessing … which as we all know can be an infinite process!

The imposing set comprised three giant grey industrial style crosses each side of stage – six in total - that resembled huge hammers laid on their sides.

Far upstage was a 40 x 8 metre grey scenic projection mesh with a number of lights hidden behind including Sunstrips and LEDBeam 100s, and this was fed with images from four high powered projectors.

Fourteen BMFL Blades were right at the core of the rig, two used as follow-spots, controlled via the TV lighting operators’ console, positioned on towers at the back of the Hall.

Four of the remaining 12 BMFL Blades provided centre-back  for the cameras and eight on the floor upstage for those huge beamy looks, strong contra-lighting and nice gobo effects into the cameras. 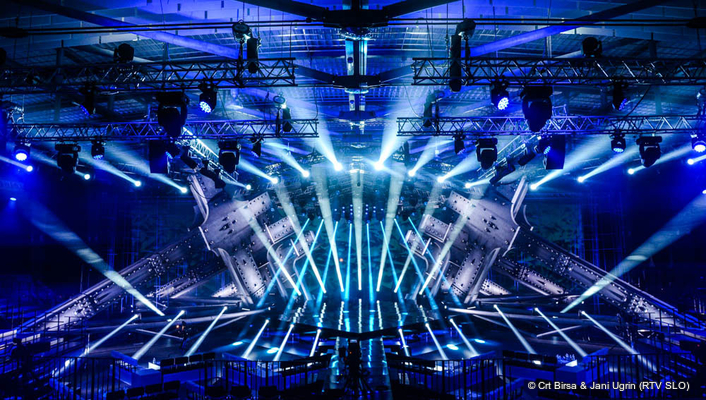 Crt’s many comments on the BMFL Blades include, “The dimming is VERY precise and the blades (shutters) are incredibly useful”. He utilized them to isolate and treat parts of the stage and to strategically limit the backlight for some looks. “The fixture is very bright, the zoom angle is great... actually it is nonsense to talk about ‘good’ features on the BMFL, because everything is exactly where it should be – everything is excellent”.

Twenty-four MMX WashBeams were on the front trusses and also under the control of the National TV operators. They were picked due to the blades and positioned as they were, could light both the stage and the green room areas immediately in front of it.

Crt likes the fact that BMFL and MMX are compatible in colours and CT, so it’s very easy to combine the two sources. While they mixed a bit of CTO into the whites for the faces, they were able to drop the colour temperature, so the backlight colours looked exactly as they wanted on camera.

The 36 x Pointes were the main show effects lights. The trussing design formed three main diagonally orientated squares (like the Diamond in a pack of cards) with 16 Pointes in the outer squares and eight on the inner one which they dubbed ‘the chandelier’ due to it having the greatest concentration of lights. The other 12 were around the front and to the sides of the stage.

“As the main FX lights, as always, Pointes did a fantastic job and I didn’t run out of options!” enthuses Crt.

Twenty Spiiders also made their presence felt. Sixteen Spiiders formed the middle square and were used as secondary effects lights. Usually Crt combined them with LEDBeam 100s and Squares. The other four were used to wash the venue ceiling with colours to match the set.

Crt was pleased that he decided to group the fixture types together and this, his first experience with Spiiders, exceeded his expectations!

“It’s a great LED wash - fast with nice saturated colours, and if playing with the sub-elements like circles and pixels is not enough, you can turn on the flower effect in the middle and have a whole new array of eye-candy!”

He commented that having them right in the middle of the rig enabled a break-up of the beam looks and enabled a more intimate style of lighting that brought a completely different mood. “They are truly multi-functional,” he stated. 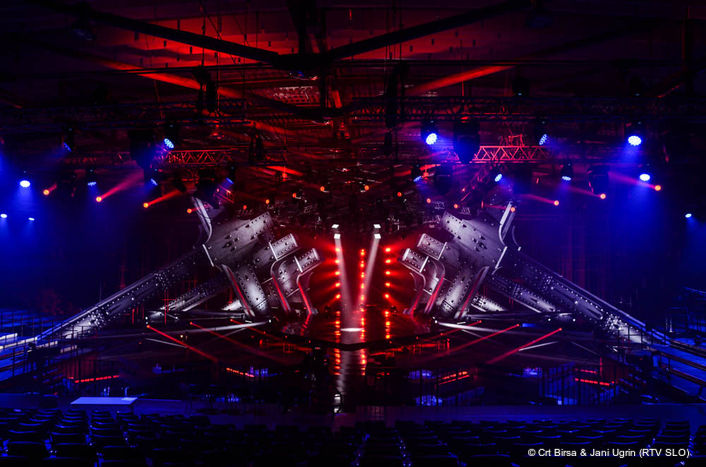 Continuing on the LEDWash theme, 22 x LEDWash 600s were on the rig – 14 dedicated to keeping the audience lit and coloured at all times, divided evenly down each side of the venue. Six more were hung on the inner two squares and used to illuminate the prominent structural pillars in the centre of the Hall, while the other two assisted the Spiiders with the ceiling wash.

A total of 31 little LEDBeam 100s made their presence felt! Sixteen formed a 4x4 matrix right in the centre of the lighting rig. They produced a really cool wide shard of light right at the epicentre.

Fifteen LEDBeam 100s were concealed behind the projection mesh at the back in a 3 wide by 5 high formation. Staying mostly hidden, they made massive impact when fired up and flashed. These were Crt’s "secret weapon" effects lights, and made up the third element of show effects lighting.

The LEDBeam 100 has long been a favourite in Crt’s design toolbox. Being very close together on this show, the ones in the centre worked really well as one large multi-point source.

The set was painted in a medium grey shade, a strategy Crt and Greta decided on to allow the scenic elements to be smoothly and beautifully illuminated in any colour.

The 32 x PARFect 100s – fitted with 10 and 20 degree lenses - were instrumental in this role, positioned anywhere a compact LED fixture could be squeezed in - in the pillars and all over the floor. They were used in conjunction with the 12 x CycFX 8s, six of which were under the stage at the front, carefully applied to give the impression that the stage was floating in the air! The other six lit the inner surfaces of the large pillars.

When Crt and Greta were evolving the look of the show, they already had the CycFX 8 in mind as lighting tools.

Four Robe Squares were rigged between the 8 x Pointes in the inner trussing square - positioned in close proximity to each other to accentuate their role as a centrepiece, and they looked particularly good combined with the pixels of the LEDBeam 100s and Spiiders. Crt likes the effect of the Robe Squares on camera and also the pixel effects. “They were made for cameras,” he comments.

Eight out of 16 ColorSpot 1200E ATs were rigged above the stage for performer backlight, with another 8 on the other side of the hall to backlight the Green Room and colour this area between the songs … matching to the colours of the audience and the set.

Crt ran the lighting on a Chamsys console. He had to programme for 26 live performances and create a wide range of general and signature looks for the show to help with atmospheric tasks like ramping up the tension when awaiting the results, razzamatazz for the winner announcement, plus looks for all the ad breaks, stings, jingles and other sound, vision and time fillers used during the broadcast. 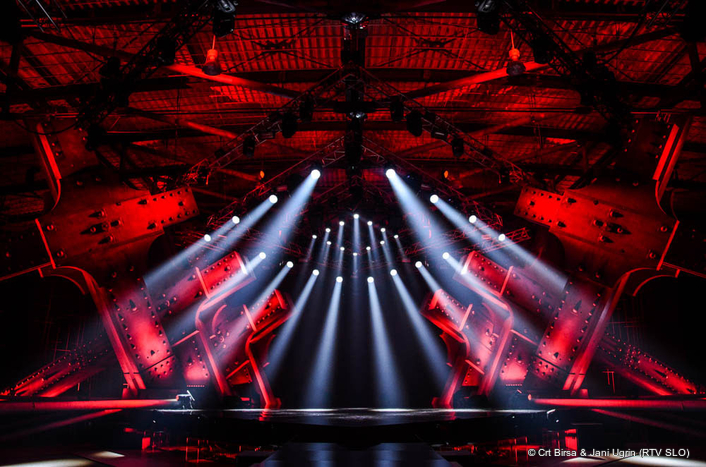 The biggest challenges were ensuring that the show replicated the design visualisations exactly, and a huge amount of accuracy was necessary when building the set and installing the lighting rig. Everything had to be symmetrical and in the right place. In some places, set elements and the lights were very close together, so a few millimetres out and the set could have blocked lighting positions, etc.

Den Baruca created the video content for most performers, with a few providing their own, and Crt enjoyed working with Event Lighting and their crew, chiefed by Uros Faganelj. “They are one of the best lighting rental companies in Slovenia, and did a great job! Everything ran smoothly over the three week period, and their team has all the technical knowledge needed to do this complex job”.