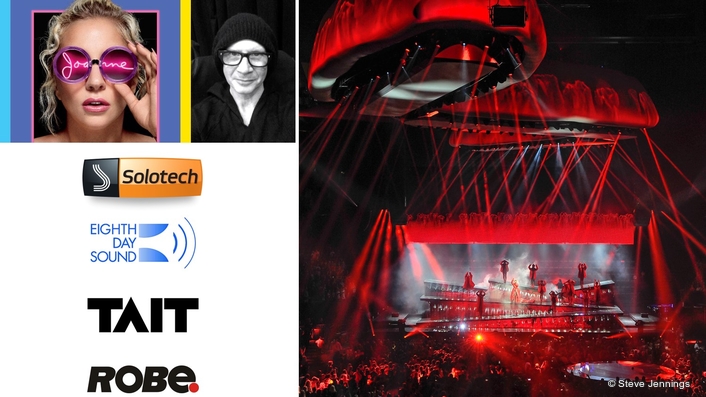 When one of the world’s most innovative, provocative and interesting contemporary artists, Queen of art-pop Lady Gaga, and one of the most consistently edgy and inventive visual designers, LeRoy Bennett, team up … you know the result will be an impressive montage of creative stagecraft and technical magic.

The production on the ‘Joanne’ world tour hits all the right buttons as a vehicle for Gaga’s intense multi-genre performance talents. As a dynamic environment of huge scenic pods, bridges which move down, flip over and transform into projection screens, it evolves throughout the show, supported by dramatic and intricate lighting and video visuals.

With over 200 Robe lighting fixtures on the rig – supplied by Montreal-based worldwide lighting vendor Solotech - LeRoy had plenty of options to develop and apply the excitement, energy and contrasts!

He shares the tour’s ‘creative director’ title with the artist, who promised that lighting was going to be a “big thing” * in her show this year. His brief included set, lighting and visual design, with custom video playback material produced by Madison Vine.

The elaborate stage set includes many moving parts. Three flying bridges descend from the three 45 ft. long pods in the roof above the audience, creating a pathway below, flopping sideways and transforming into projection screens.

This is designed to allow Gaga to embark on a physical journey across the venue, stopping at two satellite stages and the B stage adjacent to FOH, and engage close-up with different sections of audience throughout the set.

The journey ends on the B-Stage where she plays a heart-shaped Plexiglass covered piano with dichroic film. LeRoy’s design includes some very cool laser effects working with the piano.

The idea of moving through the space rather than being restricted to one performance area had roots in the last tour where she walked out through enrapt audiences via a series of Plexiglass runways. It was also fueled by her more recent Dive Bar tour of small venues, which brought her close-up and personal with fans.

In the large stadiums and arenas, this was also one of the fundamental prerequisites. She wanted the feeling of close proximity with the crowd with whom she has an incredible personal connection, so a key visual and psychological goal for LeRoy, was to juxtapose a substantial scenic element, and through it, enable her to communicate on this very intimate level. 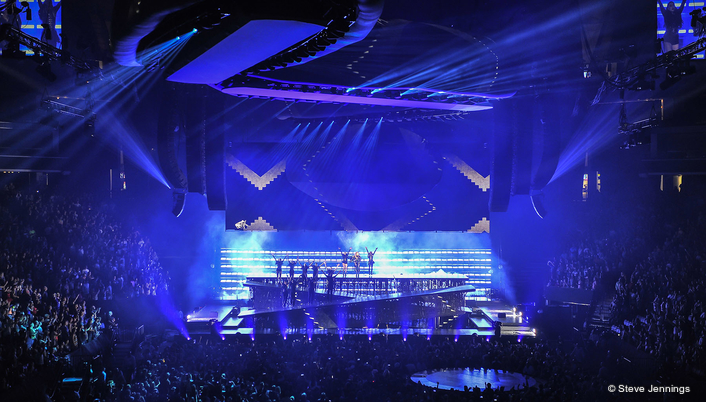 When it came to lighting, LeRoy and his lighting director on the road Harry Forster had to be able to cover not just the ‘conventional’ stage area, but the entire room. They required something big, versatile and powerful, and chose 45 of Robe’s BMFL WashBeams to be the main workhorses of the lighting rig.

Eight BMFL WashBeams are positioned on a truss inside each of the three pods, which illuminate Gaga all the way to FOH. There are four more BMFL WashBeams on the perimeter truss which also provides positions for the 28 high-powered Barco projectors beaming images onto the pods and the moving bridge screens.

Another eight BMFL WashBeams are on the over-stage trusses, with nine on the floor below the upstage light wall.

These provide all the key lighting, all the arena washes and are also utilized for effects and big spectacular all-encompassing looks. The shutters are essential to direct the light and ensure it doesn’t interfere with any of the projection, particularly onto the bridges.

“They do the job perfectly,” commented LeRoy.

The over-stage BMFLs provide all the dancer and band keys, and the nine on the floor blast through the back-wall (a mix of strobes, tilting LED battens and hybrid beam units) … to give a potent deep wash from right at the back.

Harry explained that because the BMFL WashBeams “can do everything” – from delicate theatrical solo moments on the bridges and satellite stages to full on rock-out beam looks - it reduced the overall number of fixtures they needed on that part of the rig, so budget could be redeployed to other areas.

The power of eight Robe ColorStrobes is harnessed to provide side light washing and warmers on the dancers, as well as them being used for standard strobing effects.

There is a total of 188 Pointes on the rig, with 52 per pod on two moving trusses. These produce all the big sumptuous show looks and the whole venue becomes alive and a totally interactive environment when these are fired up. 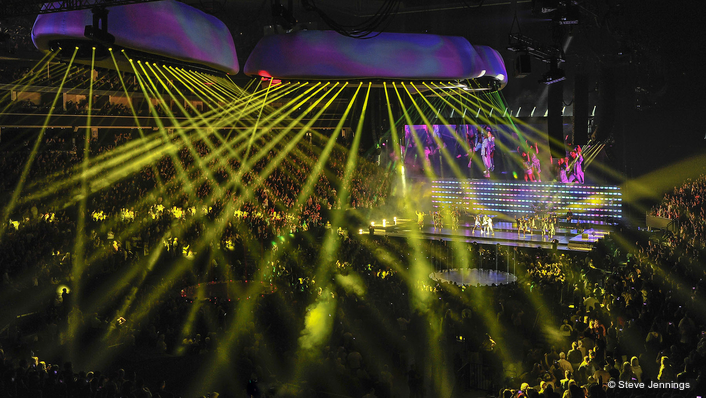 They looked at several fixture options for the pods. Something small and nifty that “packed a punch” explained Harry, as well as a unit that integrated with all the mechanics, winches and other elements involved in the automation – the stage, set and movement was all custom constructed and coordinated by TAIT.

They decided Pointes ticked all the boxes and were an ideal solution. Another 16 Pointes are positioned beneath the two satellite stages, up-lighting through the clear tops.

The 90 x Spikies are under the stage, three sections of which move independently, with the upstage section further sub-divided into three parts.

They are revealed when the upstage section lifts-up, beaming through the 24mm pitch LED video panels covering the front of each elevated section - so the issues here were brightness, size and light weight – to fit into the space and not overload the hydraulic lifts.

LeRoy and Harry also wanted a fixture with continuous pan and tilt … and Spikies were the first choice.

LeRoy specified 795 Spikies earlier in the year for the stunning Bruno Mars “24K Magic” tour, and having pushed them hard on that design, he’s well aware of their capabilities.

Harry thinks Robe is a strong brand right now and observes that it’s a lot more common to see Robe fixtures on the larger tours. “I’m not surprised, the fixtures speak for themselves … and we are very happy,” he concluded.

The first seeds of the “Joanne” design started germinating in LeRoy’s head at the end of 2016, and due to Gaga’s schedule, which included making a movie and planning her acclaimed Super Bowl halftime performance in February, he had to make several fundamental design decisions without too much input from her. 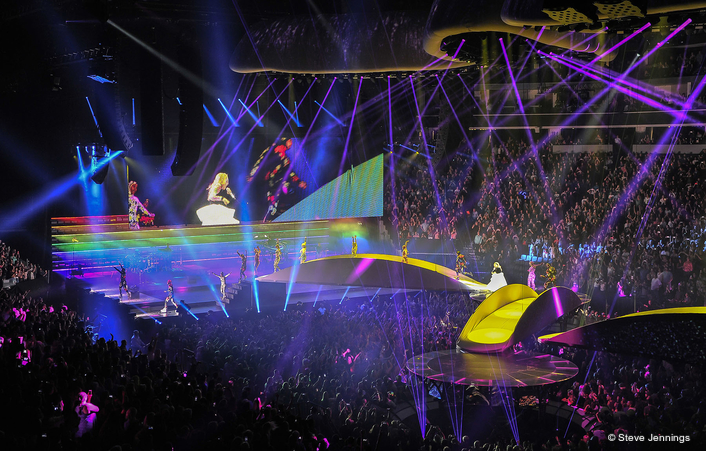 Having worked on two previous Gaga tours – Monster Rave and Art Ball - he enjoys an excellent rapport and creative flow with her, and has a great understanding of the language, metaphor and atmosphere she wants to convey live, so he was confident in taking on these tasks. .

“She is very much at the center of this show,” he commented, which is large, spectacular and highly energetic as Gaga fans expect, but the emphasis is away from presentational razzmatazz and focused on that personal emotional connection with her fan base which is the heartbeat of her live shows.

It’s a challenging and unconventional show to light, however LeRoy also applies some basic theatrical principals in structuring which work perfectly, including unfolding the visual effects measuredly … so by the time they are 75% of the way through the set ... there’s still plenty of surprises to come!

It’s a challenging and unconventional show to light, however LeRoy also applies some basic theatrical principals in structuring which work perfectly, including unfolding the visual effects measuredly … so by the time they are 75% of the way through the set ... there’s still plenty of surprises to come! 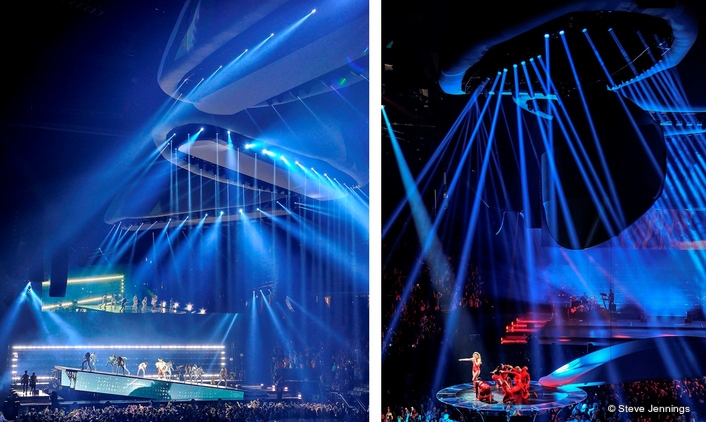 Lighting is programmed and run on a grandMA2 full size console, a process for which Harry worked closely with Jason Beari and with Loren Barton from Lumentech programming the playback video elements. There is a lot of teamwork in terms of color and texturing between lighting and the ambient video content.

They did some previsualization initially in Los Angeles, followed by two weeks of pre-production at Rock Lititz, Pennsylvania, before moving to Vancouver, for two weeks of full production rehearsals ahead of the first gig at the Air Canada Centre.

The live video (camera mix) is being directed by Robert Mcshane, the video contractor is also Solotech, audio is delivered by Eighth Day Sound and the tour’s production manager is Hydro Mullin.

The “Joanne” tour continues until December 2017