Robe is Groot for the Classics 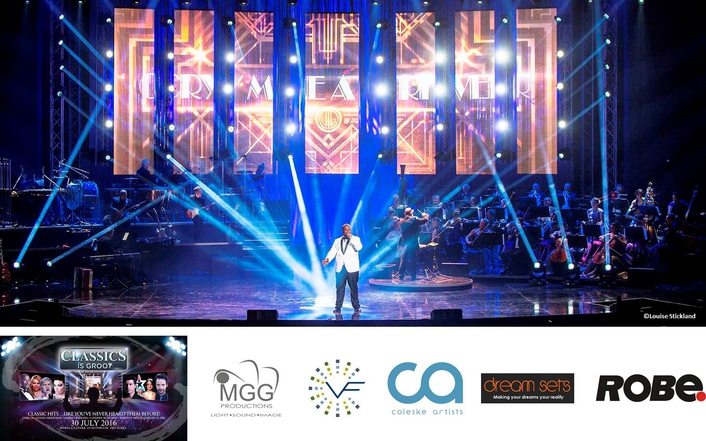 ‘Classics is Groot’ is a new musical performance extravaganza staged at the 6500 capacity Moreleta Auditorium in Pretoria, South Africa, produced by the same creative team from Coleske Artists who deliver the massively successful ‘Afrikaans is Groot’ phenomena each year. Classics is more focussed on crossing over to the English speaking market and the first completely sold-out event saw “an explosion of song and dance” unfold in classics from several eras and genres of music performances by some of SA’s finest artists.

The full technical production  - lighting, sound, video, staging and  rigging – was supplied by leading SA rental company, MGG, project managed for them by Denzil Smith. Lighting was designed by the innovative and talented Joshua Cutts of Visual Frontier ... who specified several types of Robe moving lights including BMFL Blades and WashBeams.

The show featured a hand-picked 33 piece symphony orchestra conducted by maestro Eddie Clayton which, combined with an electronic rhythm band, brought richness and new perspective to many anthems, from popular opera and classical arias to blockbusting musical production numbers to film scores, to rock ‘n’ roll, soul, funk and pop hits – new and old, all ‘classics’ in their own right. 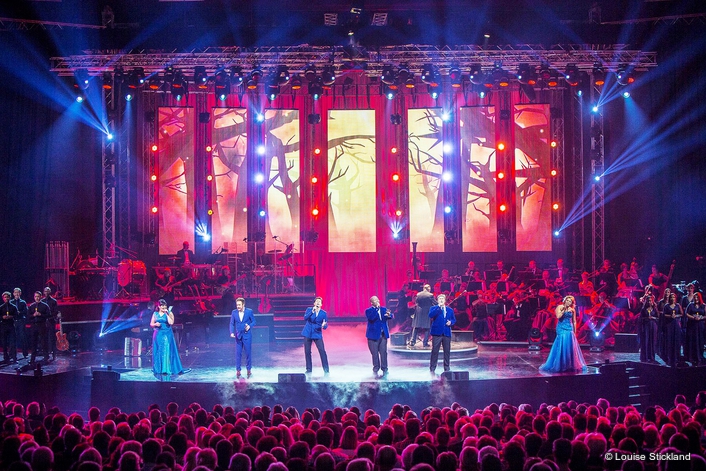 As well as having a large live audience, the show was recorded for both DVD and later broadcast on the KYKNET TV channel.

The biggest technical challenge of the show is that there are no flying facilities so the whole rig was ground supported on a 6-legged system giving a 24 metre front span and 14 metres of depth.

“It was all about the music,” explained Josh, so that had to be centre stage, with lighting and video content reinforcing the tone, sound and era of the music as well as giving it a fresh twist to match the unique presentation of each piece. 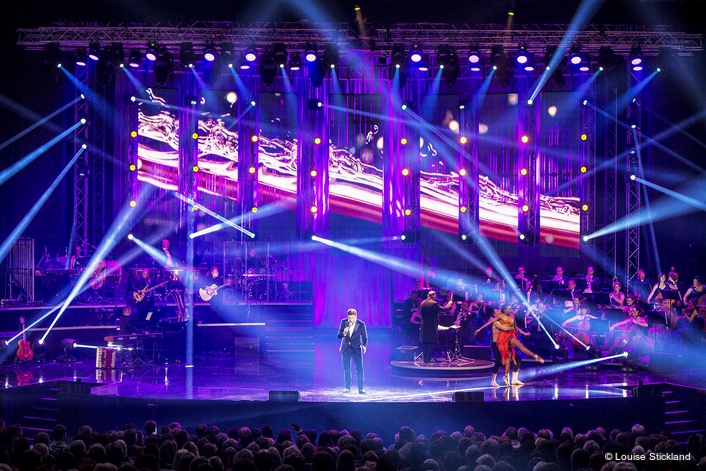 Josh’s lighting needed to be flexible and imaginative and ensure that the large number of people onstage were lit nicely for cameras and the drama of live performance.

The Robe’s included eight BMFL Blades and two WashBeams which were the main front key lights and as such, absolutely crucial to the show

“The colour rendering for the camera is absolutely spot on,” declared Josh, adding that he was able to highlight the full orchestra beautifully with just four BMFLs, and the shuttering on the Blades mean that faces and artist profiles onstage can be very accurately and sharply defined, bringing illuminative finesse and poise to the picture.

Josh also reckons the BMFL Blade is currently his favourite light on the market!

The 24 x LEDWash 600s provided the blanket over-stage washes and these are a staple of most of Josh Cutts designs and in SA are virtually the ‘industry standard’ LED wash source.

Twelve LEDBeam 100s provided some side fill from the far left and right corners of the stage, rigged on truss totems that extended the width of the performance space.

It was Josh’s first chance to try out the eight Spikies, used on the outside legs of the ground support for fun fast-moving beam work.

Twelve DL4S profiles downstage were used for beam work into the air and also on to the front of the ground support. 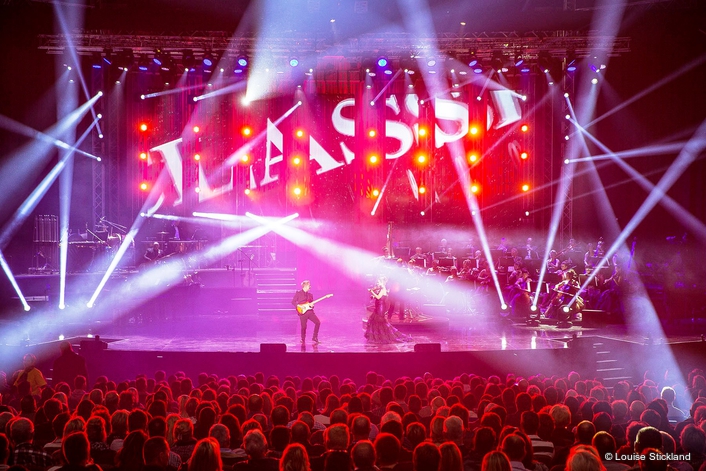 He also had a number of other fixtures at his disposal, although for the complexity of the show, it was not a large rig.

Josh started developing the design with the idea of a classic concert at the base, overlaid with layers of theatrical and televisual lighting providing the flourishes of special visual magic, including pixel-mapping several batches of fixtures.

The trick was to light for TV without losing the mystery and anticipation of theatre.

Seven columns of 12 mm LED mesh upstage added some structural form to the stage spac, and upstage of these was a white back-cloth which could be filled with colourful and vibrant washes for additional depth behind the video texturing. In between the LED columns were 6 metre high totem trusses with front facing pixelPARs that were also mapped. 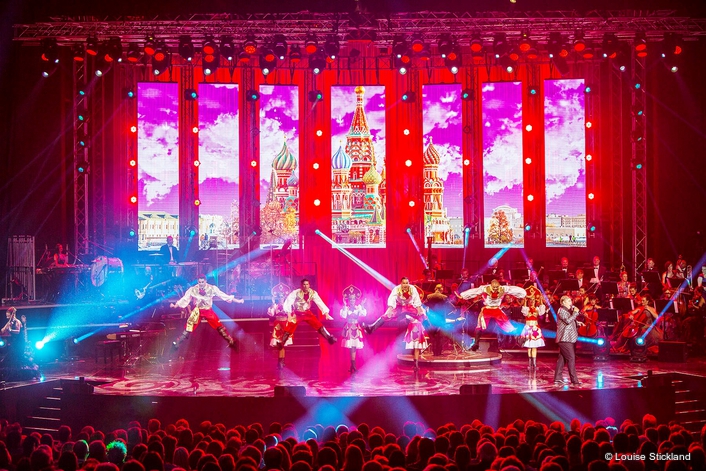 The set-up, tech and programming time and rehearsals were high pressure. With 29 numbers in the nearly 3 hour show, they had only about 15 minutes with each soloist to get them perfectly lit from front and back for each segment before hitting the dress rehearsal a day before the show, so the programming was intense.

For Josh, lighting the show was both challenging and rewarding. “Coleske Artists set exceptionally high standards with all their productions which drive us to match this on the technical. It’s great to work with producers like this because they understand lighting, it’s power and the emotions that it can help achieve,” he stated. 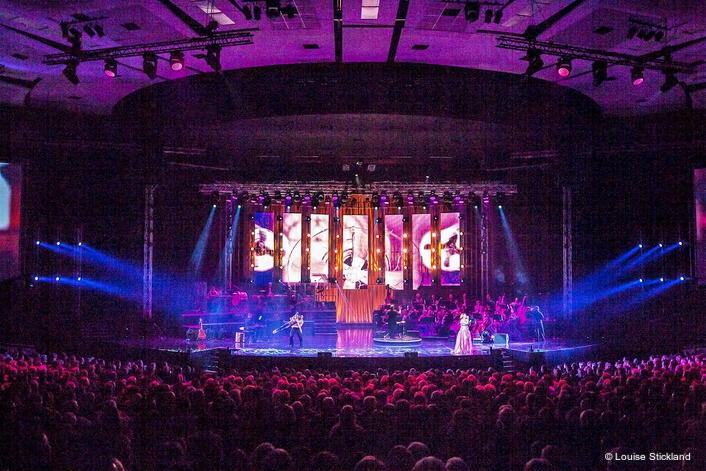 The MGG crew of 14 was chiefed by Herman Wessels.

The technical director for Coleske Artists was Ian Vos, the show was directed and produced by Barry Pretorius, choreographed by Hayley Bennet-Freindin and directed for TV by Fritz de Jager. The set was designed by Dream Sets.

The event was a huge success and ‘Classics is Groot’ looks set to continue development as a live performance concept.