Once again, the eye-catching lighting was designed by one of Mexico’s best known LD’s Tiffy (German Castellanos) with over 100 Robe fixtures on the rig, supplied by top rental company LED Project. Both are based in the pulsating capital city, CDMX.

The fifteenth edition of the annual Las Lunas Del Auditorio – the Mexican live performance and music industry's most prestigious awards – was staged at the National Auditorium in Mexico City, a glittering, star-studded event honouring national and international talent with 23 awards and nine dynamic live artist collaborations.

It was Tiffy's ninth year of lighting the event which was broadcast live on four National TV channels Télévisa, Azteca, Channel 22 and Canal Once as well as being streamed live on You Tube.

To create a spectacular televisual and live experience, Tiffy worked closely with the rest of the FOH team that included video content director and producer Ivan Trujillo and FOH engineer Rudy Gonzales together with the venue’s head of lighting Jorge Rios who operated the large conventional rig on one console, while Tiffy concentrated on the moving lights and other technology on a separate console as well as calling follow spots.

They - and monitor engineer Gustavo Zertuche - enjoy a great creative chemistry. “It is all about teamwork, sharing information and bouncing creatively off one another,” says Tiffy, a process that gave TV director Marco Flavio Cruz all the looks and excitement he needed for a premium broadcast.

The stage aesthetic was originated by Salvador Patino and comprised a large central 5mm pitch central LED screen flanked by three curved 6mm screens a side, with two 2.4 mm presenter screens downstage left and right. Further out to the sides to cover the Auditorium were left and right IMAG screens.

Tiffy designed three 5 meter diameter circular trusses to fill the central over-stage void, with a straight back truss and both the front truss and a further back ‘advanced’ truss on the audience side of the proscenium.

With all that LED onstage he also knew he needed powerful fixtures and chose Robe's BMFL Spots and Pointes as his main workhorses. 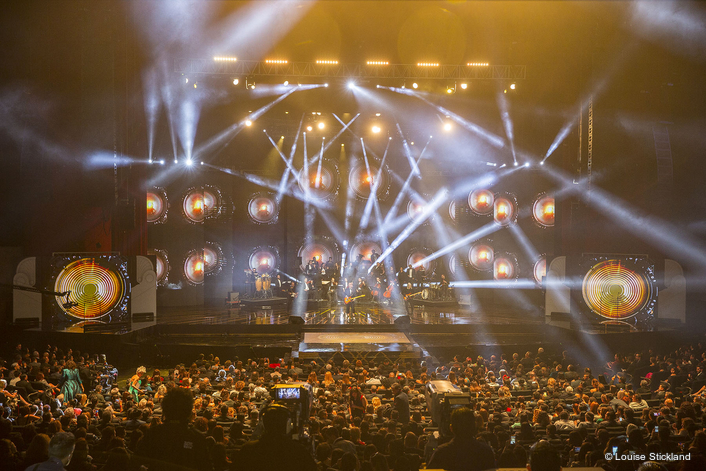 Fifteen BMFL Spots were positioned on the circles, the front trusses and the advanced / audience truss. "The intensity of these fixtures is incredible , I love the gobos and the colour mixing" he enthused, further commenting that it was important to the overall design to use similar fixtures to light the onstage action and the audience, bringing a visual harmony to both areas which juxtaposed well on camera..

The BMFLs did all the principal key lighting in addition to highlighting the stage and audience and their powerful gobos created texturing on a scenic screen that flew in and out masking off the upstage areas during band changeovers.

The 42 x Pointes were distributed around the trussing circles and above the most onstage pair of curved screens, on the front truss and the floor, and used for a wide range of colour and movement effects and WOW factor looks. "Having used Pointes for three years now I never tire of them or run out of visual ideas," comments Tiffy.

For general stage and crowd washing, he specified 24 x LEDWash 600s, 12 on the circles, six on the front truss and the rest on the audience truss.

He’s been a big user of Robe from the start, when the brand first started appearing in Mexico. “I continue to be impressed with the new products and the innovation that Robe is producing year-on-year. There is a great product development strategy and it’s very exciting”.

The twelve Robe ColorStrobes were however completely new for him. They were all rigged on the audience truss to assist with capturing the substantial audience interaction and animation throughout the event. "These Strobes are totally crazy!" he declared. "Capable of very beautiful effects with the big advantage of also being able to use them as floods". This was ideal for augmenting the audience illumination. 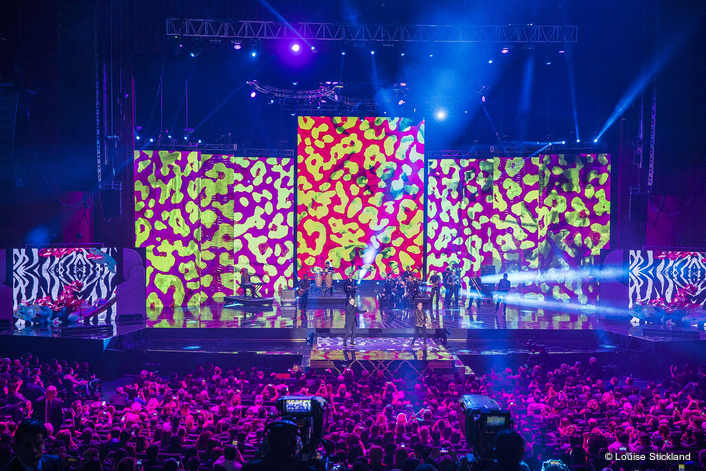 Six CycFX 8s on the front truss added to the arsenal of available audience luminaires, a unit TIffy appreciates for its brightness and zoom. Another four CycFX 8s acted as footlights in front of the two presenter stages, and the scenic casements behind the presenter LED screens were eight MMX Spots rigged in two clusters of four on the front truss.

All this Robe technology was augmented with around 200 generics, supplied from the house rig, a mix of Moles, PARS and Lekos.

Tiffy explained that he also wanted to be able to make contrasts between the conventional and the intelligent lighting. Good preparation coupled with his fund of experience and imaginative flair for lighting concerts, tours and large spectaculars meant he could work really fast to program the huge range of different looks and atmospheres needed to differentiate the nine dynamic live acts.

Each also represented a different genre of music all of which needed its own special visual treatment from lighting and video.

Additional Robe fixtures for the backstage press and media centre, green room and the foyer and red carpet areas outside the building were supplied by Robe’s Mexican distributor Vari Internacional. 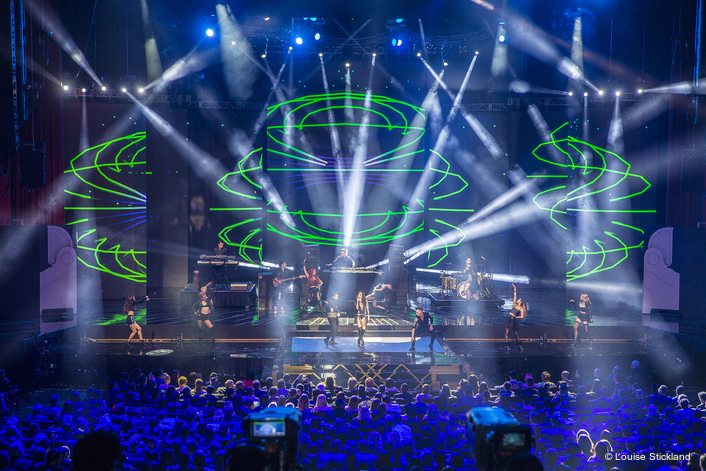 This included 16 Spikies bringing a touch of razzmatazz in the foyer, photo wall and red carpet areas and also highlighting a large sculpture of the Las Lunas logo, plus a combination of miniPointes, Pointes, MMX Spots and CycFX 8s, together with PicklePATTs bringing a touch of class to the after-show marquee where stars, VIPs and beautiful people partied the night away. 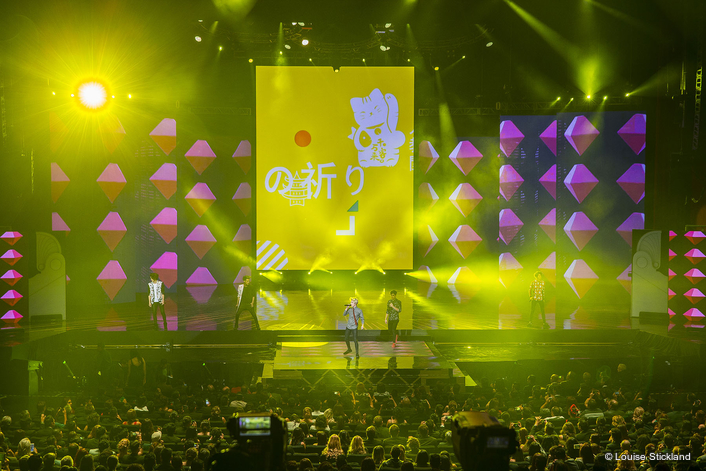 Tiffy thinks that in addition to Robe gaining significant brand profile in Mexico in recent years, he values the chance to give both creative and practical feedback on products which – together with that of other LDs - is constantly being sought by Mexican distributor Vari Internacional. 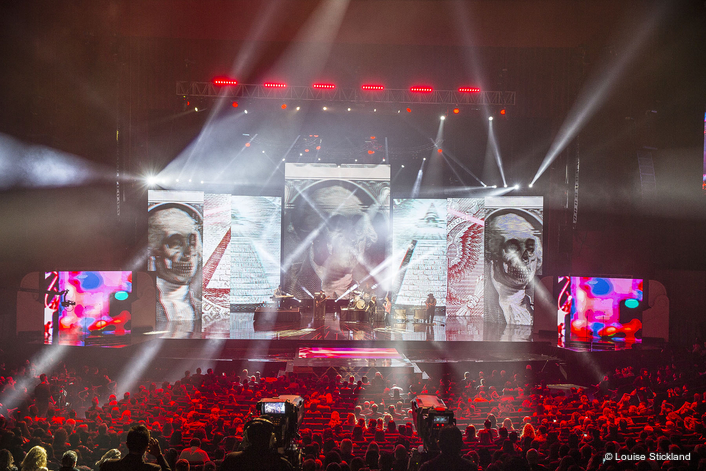 LED Project, headed by the charismatic Sergio Serrano has also championed Robe for many years, and his initial and continued investments in the brand’s latest technologies have really helped get the ball rolling for the Czech manufacturer in Mexico. 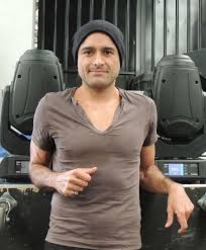 Tiffy has had an incredibly busy year since we saw him at the 2015 Las Lunas event. His work has included touring with duo Aleks Syntek & Christian Castro and Latin Grammy nominated indie pop singer and composer Carla Morrison. One of his long term clients Cafe Tacvba, who won a 2016 Las Lunas in the Spanish Rock category, start a new tour supporting a new album with a totally new lighting concept in early 2017.