Robe Gives It Large at One Big Weekend

The lighting equipment for this stage was supplied by the HSL Group incorporating  PSI who provided all rigging and support. The two companies have recently merged offering even more comprehensive rental operations throughout the UK and Ireland.

The 1xtra / In New Music We Trust stage was located inside The Venue, a 5000 capacity multi-purpose temporary structure erected for Derry’s 2013 year as European Capital of Culture. The house lighting rig in here also contains 24 x Robe moving lights installed by Paul Jones of Ethix Management – and these were combined with the rest of the kit supplied by HSL – for the Radio 1 event.

He used the existing Star Events’ structure at the stage end of the auditorium which is part of the 12 month Capital of Culture venue installation, and needed to create two completely different looks for the two different brands - 1xtra and In New Music We Trust Stage – and over the three days. This also had to cover a multiplicity of musical genres, from hip hop to thrash rock to hardcore EDM.

Basically … it had to be as flexible as possible!

Additionally it had to look fabulous on TV - output was broadcast live and highlighted via BBC Three, The Red Button and online - and for the ebullient live audiences who packed into the site each day enjoying a superlative line-up of international artists.

For Friday’s 1xtra night, he utilised 24 x Robe CityFlex 48s to make up a high-impact back wall of Xs, blasting out from upstage to compliment the brand.

The moving lights were all arranged on and around six vertical trussing towers onstage that were linked to four overhead ‘finger’ trusses cantilevering out over the audience. The metalwork was in shot most of the time and provided a chunky architectural definition to the space – which was also lit – refreshingly – without any LED video surfaces. 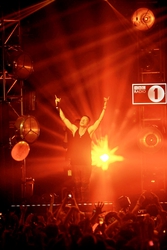 He is really into the idea of ‘smaller-lighter-brighter’ luminaires, and this is something that Robe has specifically committed to since the launch of the ROBIN range in 2009.

Apart from above the Star Events structure, the rest of The Venue roof has limited weight loadings, however the LEDWash 600s at just 10.6 Kgs rigged on lite-beam trussing proved a perfect solution, with 24 in total used to provide good quality audience lighting all down the hall.

The LEDBeam 100s created an eye-catching ‘crown’ across the curved truss at the top / front of the stage that continued right out into the sides of the venue.

Routledge comments, “The LEDBeams are very versatile. I have used them for rock bands and also as side lights for theatre shows. They are quick, very reliable and look particularly good en masse”.

The MMX Spots were flown on the towers and the finger trusses and provided general rear lighting and beam work together with the MMX WashBeams.

Routledge continues to be impressed by the MMX WashBeams which he also used recently on a tour with Irish dance troupe, Prodijig. “For small budgets they give me more options,” he says.

The 1xtra / In New Music We Trust was headlined by Rita Ora, DJ Fresh and Vampire Weekend. Around 12 bands brought their own LDs including Bastille, whose Will Dart intends to use Robe LEDWashes and MMX Spots on their upcoming tour later in the year. Disclosure’s LD Will Potts added a substantial specials package for their rocking Sunday night set!

Routledge controlled all lighting – which also featured strobes, generics, LED fixtures, some other moving lights and 12 special custom Patt2013 retro luminaires with big dish reflectors which he has designed - from two grandMA2 consoles.

Routledge has worked on some of the most exciting live shows in the UK over the last 12 months including being lead lighting programmer for the Opening and Closing Ceremonies of the London Olympics and Paralympics and for the Queen’s Diamond Jubilee Concert.