Robe Gets Into Summer Stadium Show

Robe moving lights were top of the spec list compiled by Frederic “Aldo” Fayard from Paris based visual design practice Concept K, who produced an elaborate lighting design for the 2017 Summer Stadium Festival staged at the Orange Velodrome in Marseille. The Velodrome is France’s largest football ground with a capacity of over 67,000 and the country’s second largest stadium after the Stade de France. This was the second edition of the one day ‘Summer Stadium’ dance spectacular – following the first in 2015 – featuring an impressive line-up of electronic and EDM stars. It is organised by the venue itself.

After the success of the inaugural event, Concept K was asked back to create the set, lighting and video design for this one, working to a brief of presenting something, fresh and different that would mark this apart from the myriad of high profile EDM concerts traversing the electro universe!

Aldo explains how their visual concept devised in 2015 was inspired by the stadium’s architecture. The idea was to enhance the event environment by accentuating shapes and form of the space - originally opened in 1937 and recently modified with some special architectural design features - retaining its integrity and essence. 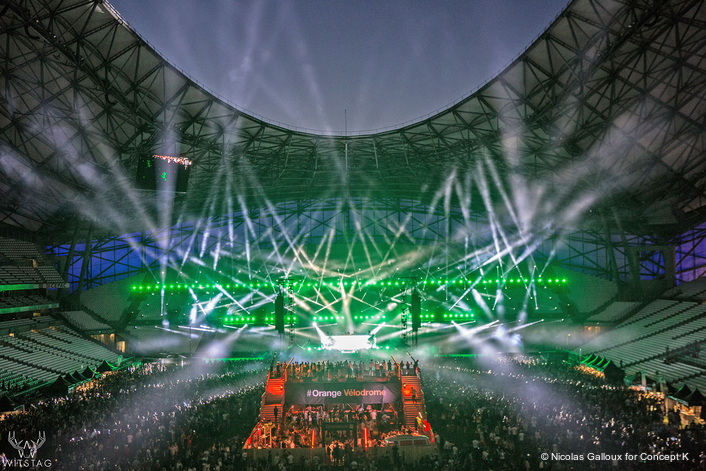 The base idea for lighting was to keep black steel, trussing, scaffolding and other extraneous metalwork to a minimum and as concealed as possible.

They didn’t attempt to create a standard ‘black box’ stage structure, preferring to leave it open, accentuating the contours of the building and utilizing the actual stands, bleacher balconies and other structural elements and vantage points for lighting positions.

This added a real challenge to the project! But of course, that’s what Aldo and his team love! 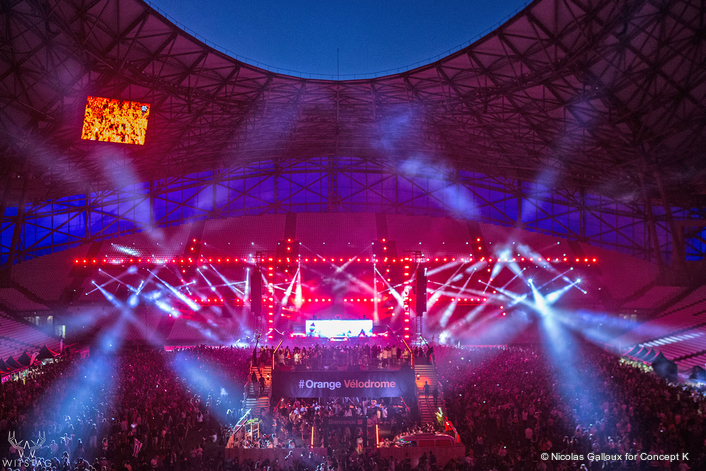 Robe is a moving light brand that Aldo embraces frequently in his designs, and on this occasion he specified 120 x Pointes and 36 x BMFL Blades. These were supplied to the event by rental company Dushow together with a number of other lights and the video screen.

A major player in the French rental market, Dushow has a warehouse / office base close to Marseille which is managed by Christian Lorenzi.

A high-impact matrix of lighting was established behind the stage using the 120 Pointes, laid out in a 100 metre wide by 20 metre high grid.

On the first Summer Stadium Festival, they had used a product from another brand to make a similar type of effect …. BUT … this time, using the Pointes made it that more prominent and hugely enhanced the quality and impact of the look.

“It was great to work with a more powerful fixture with greater functionality and an efficient focus – the idea of the beam matrix really came alive!” commented Aldo.

At the very top of the uppermost seating stands, they positioned 24 of the BMFL Blades. On the only two towers that were installed for the production, the remaining 12 x BMFLs were positioned for key lighting the DJs and dancers and to generally light and texture the stage.

The BMFL was chosen for its power and zoom range, especially at the tighter end – which goes down to a piercingly bright super-concentrated 5 degree beam.

Aldo has been using BMFLs regularly for the last couple years, ever since he had a demo from Robe France shortly after the subsidiary was established in early 2015, just after the BMFL itself was launched and in production. 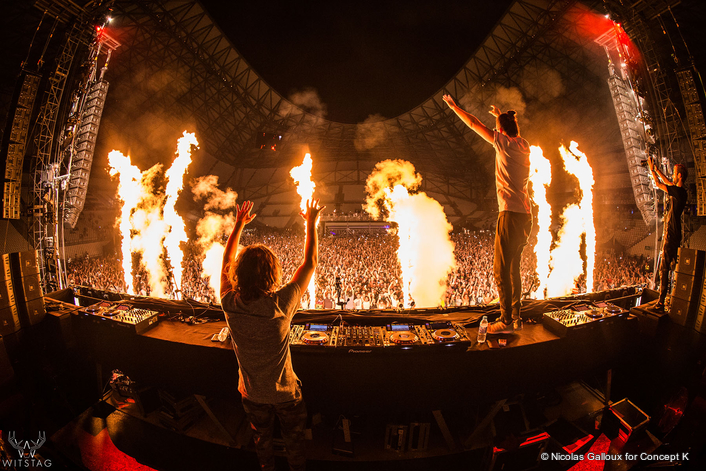 “I was so blown away with the power, flexibility and build quality of the BMFL” states Aldo, who had encountered Robe before then, but that was the point at which he saw the brand literally “in a different light”.

The biggest aesthetic challenge for the Summer Stadium Festival was to keep the pace of the lighting pumping with the music for 11 hours non-stop, with a packed venue and only one stage as a focal point and a few minutes between each artist changeover, culminating in headers Dimitri Vegas & Like Mike.

All aspects of the visual design needed to work proactively for everyone appearing onstage throughout the day, with Aldo and his FOH team operating 90% of the time, accommodating a number of guest LDs for the rest. 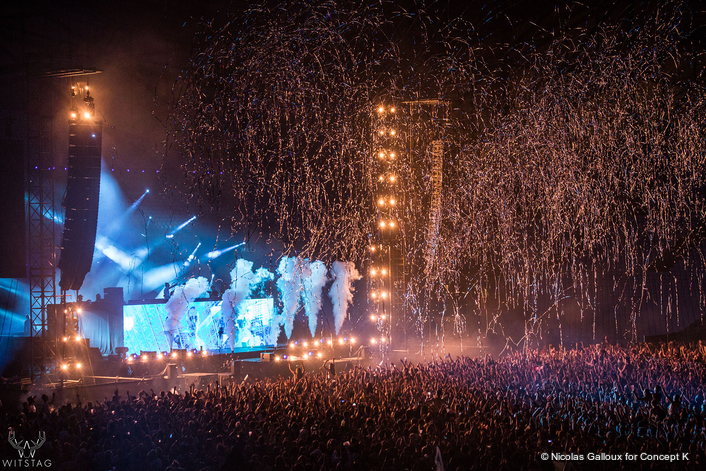 They utilised three grandMA2 full size consoles – one for the lights, one triggering an ArKaos media server system running playback video content, with some water and other FX activated by the third desk.