Robe Gets Hï in Ibiza 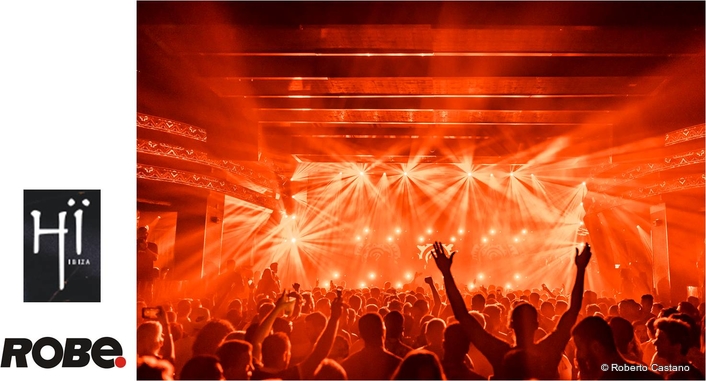 A sizzling 2017 Ibiza summer season saw new clubbing experience Hï burst on the scene with fresh energy and impetus mainlined into the heart of the Balearic dance scene, fuelling the buzz, hosting the world’s most significant DJs, attracting a huge fan following and etching extraordinary memories on the psyche via incredible visual productions created by Romain Pissenem and his team from High Scream.

Over 200 Robe moving lights helped Romain define Hï’s two spaces – the Theatre and the Club.
These included 72 x Pointes, 24 x Spiiders and 36 x Spikies in the Theatre and 100 x Spikies and another 20 Spiiders in the Club, all supplied by their regular lighting rental partner, France based the SLS Group, who also supplied all Hï’s video. 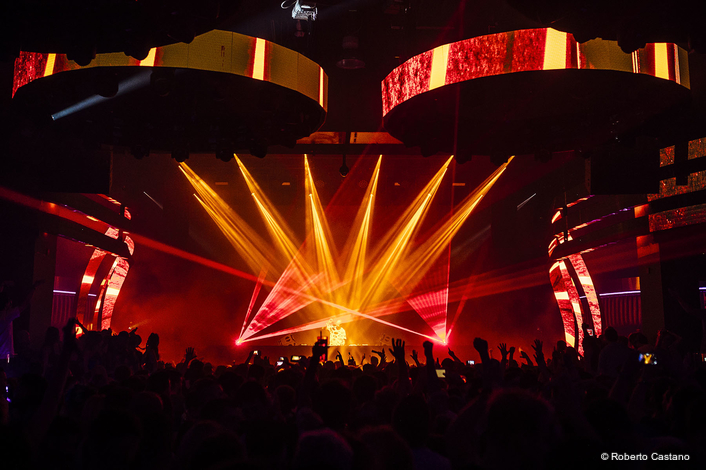 The building was previously loved as Space for years by the clubbing fraternity, so a major aesthetic objective was the total transformation involving everything apart from the exterior walls! They wanted to build a new, exciting and totally amazing environment, something truly world class on an awesome scale and ambition level … where the WOW factors just kept coming.

Well-known for this background as a theatre director and ground breaking work at Ushuaïa Ibiza, Romain teamed up with acclaimed show, lighting, set and video designer Willie Williams, whose clients in the concert touring sector include U2, REM, George Michael, Robbie Williams, etc.

This gave Hï two of the most vibrant and lateral thinking imagineers on the planet plus a very talented team headed by technical directors Bertrand De Saint Pern and Philippe Monlong, technical manager Ian Woodall and production manager Caroline Harrington … together with a HUGE sense of expectation.
Production values and technology were right at centre of all the concepts for Hï. 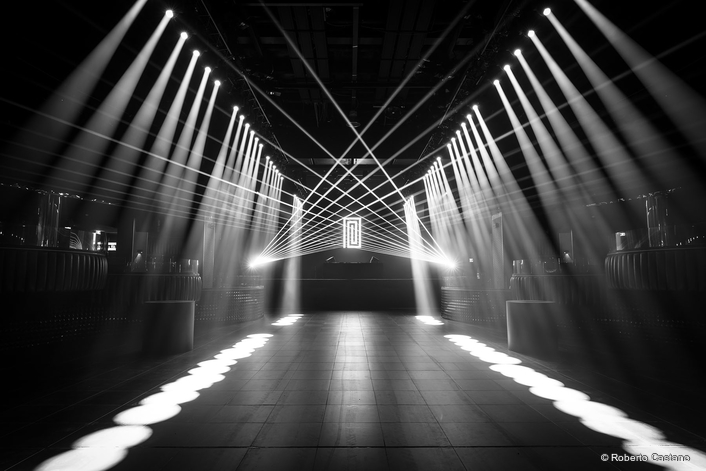 They wanted to create a signature visual element in the main space … so photos, videos and other media generated there immediately identified the location, and they wanted the main space to be theatrical and action-packed with drama and surprise.
Hï’s unique visual insignia evolved into the ‘twist’, created with three lines of LED strip curving and twisting playfully around the Theatre, defining the space and adding an almost virtual separation between room and stage.

Operating seven nights a week with the season at full tilt, they also wanted to be able to radically change the look of the Theatre each night, so multiple motors, moving trusses and pods were installed in the roof, together with a custom tracking rail system that allowed whole groups of lights to be moved and re-shaped.
With these rigging aspects in place, the environment was structurally fluid and infinitely changeable.
Twenty-four of the 72 Pointes were all on this track runner system and shifted around depending on the chosen configuration for that night.

This enabled a stream of prominent DJs to play on consecutive nights and it looked like a completely different venue – apart from the identifying Hï ‘twist’.
The Pointes were the main effects lighting in the theatre and were used extensively every night through the season which saw Hï host an impressive run of 206 shows back-to-back! 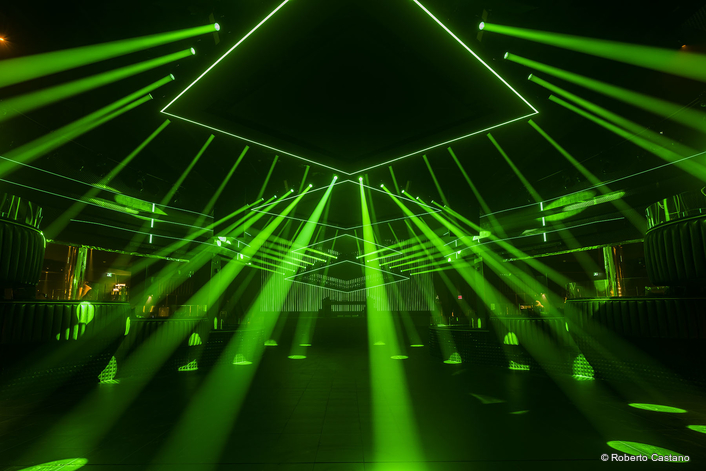 Romain can still find new and interesting combinations of light / effects from Pointes – even though they are so popular for this genre of performance. The Pointe has become an invaluable tool for dance music lightshows – the speed of the fixture, it’s small size and the sheer amount of ways the light output can be coloured, twisted and turned is still stunning audiences worldwide.
Romain first used Robe’s newest Spiider LED wash beam fixtures for a DJ Snake show he designed in Paris late last year, since which they have become another favourite. He also used them extensively for his Ushuaïa Ibiza design this year. 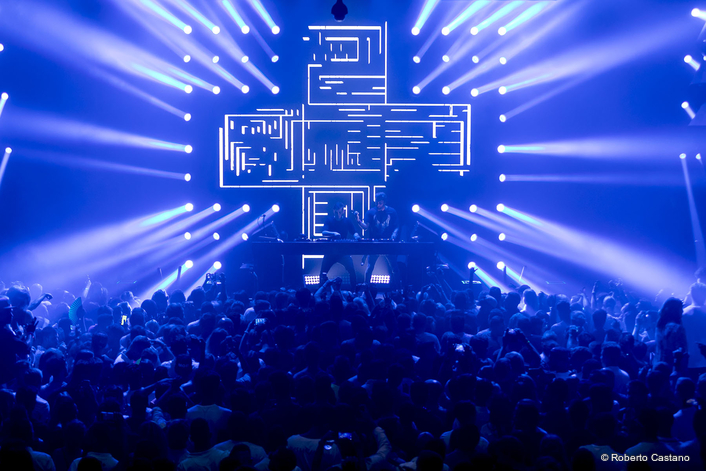 “It’s an amazing light either as a beam or a wash, the colour system is smooth and very precise, the zoom is fantastic and the central flower effect is something you can hold back and then throw into the mix unexpectedly. Like the Pointe it is great for dance music shows”.
In the Club room at Hï, a 10 x 10 matrix of Spikies – 100 in total - was created and ensconced high in the roof. This allowed it to be hidden as the place warmed up, then revealed as the vibes and atmosphere got pumping.

Spikie is an ideal light for matrix style effects which can look truly fluid and very spectacular bending and rolling with the rhythm of the dance! It is also fast and light so multiple Spikies can be packed into places where weight and space are at a premium (which wasn’t the case here), and they are also very economical on power!
Also in the club were 20 x Spiiders used for general wash illumination, run in wide mode for full pixel control, unleashing another whole layer of effects.

Control in both rooms was grandMA2.
As well as their own Hï team, a succession of guest LDs and lighting directors and operators visited the venue with their artists.  Without exception Romain reports … every single one of them was happy with the rig, with Robe in the house, and with all the options offered.
The luminaires proved reliable and dependable with virtually no Robes needing fixing despite their gruelling schedule! 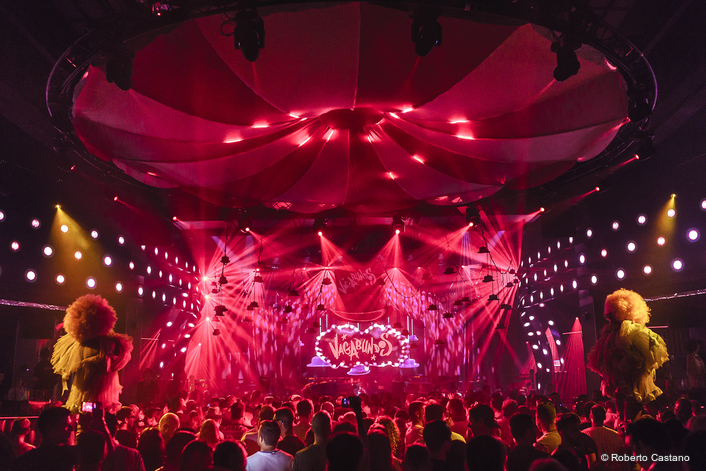 The biggest overall challenge of creating Hï was the five month build timescale in which they had to gut the place, start with a bare shell, design a highly dynamic system and deal with the logistics of installing it and its support infrastructure, all vital to the mission to launch not just a good new club project … but THE best club!
The passion, foresight and hard work all paid off as Hï’s first season established the right – highly delicate - balance of cool and commercial to make it beyond trending and into developing its own culture.
Romain and the “brilliant” High Scream team, ever keen to keep pushing the boundaries in all their productions, are already working on a series of “crazy” ideas for 2018, so we can look forward to plenty more visual shock and awe!