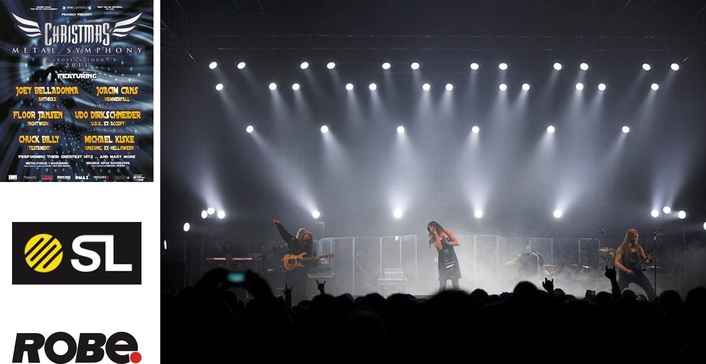 Lighting this exciting and eclectic full-on mix of metal mayhem was Nick van Balen, who is based in The Hague, The Netherlands … an experienced designer with a particular penchant for lighting the various genres of rock music.

Many people might have been daunted by lighting this many musicians onstage and such a dynamic show with less that 60 fixtures, but the enormous versatility and scope of Robe’s LEDWash combined with van Balen’s imagination and skill produced amazing results!

Fourteen of the LEDWash 300s were rigged to the top of 1.5 metre high poles on floor bases placed strategically around stage, while the other 30 units, together with the twelve LEDWash 600s were on three overhead trusses – front, mid and rear.

Some of the upstage LEDWash 300s were on drop bars and the LEDWash 600s on the front truss were utilized for key lighting the vocalists and the downstage area.

Arranged like this, the lights really increased the perceived size of the performance space, giving all the coverage needed, plus plenty of depth and height with lots of headroom for those fabulous and potent ‘big rock looks’.

Van Balen used a lot of single colour looks and scenes which also accentuated the size of stage and enhanced any colour-combinations that were also used.

The solid beams and the excellent coverage of the LEDWashes ensured that the rig looked far bigger than it really was, and effects like strobing were really impressive.

He likes the colour mixing capabilities of the LEDWashes, and for this show used this to produce slightly off-beat variations of traditional colours. He also applied the range of whites to bring a raw, harsh and powerful contra-look to the stage action.

He chose LEDWashes for the tour because of their small size and light weight, which was great for fitting the truck pack and the budget, and was also confident he could create a dramatic and heavy-hitting lightshow with them. He remarks that the aesthetics of the LEDWashes themselves are really nice, which is important when they are as visible as they were on this rig.

The lighting trussing and motors for the tour were supplied by Stage Light, based in Den Bosch, The Netherlands.

Van Balen started using Robe products about two years ago, and now they are always on his specifications. He also likes using the little LEDBeam 100s in ACL style, a look that has really caught on for lighting this style of artist. 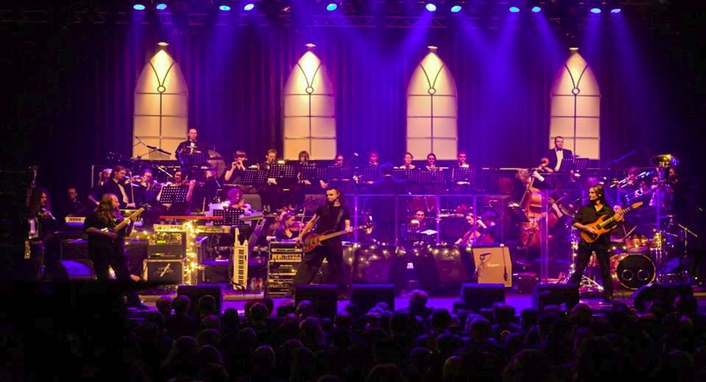 Early in 2014 he hits the road again, this time working with Dutch symphonic rock band Delain who are opening for Within Temptation, whose own LD, Pim Elberse from Purple Group is also a big Robe advocate.

Robe Most Definitely Rocks into 2014!