Robe Funks it Up with Bruno Mars

Seven hundred and ninety five (795) Robe Spikies are on the road with the incredible Bruno Mars 24K Magic world tour – setting a record for the largest number to date of a single type of Robe fixture on one touring show! The Spikies are the main lighting feature of an action-packed show and are used constantly for hi-impact looks, an array of fluid effects, mesmeric chases, animated chunks of color and magically twinkling and sparkling ‘soft’ surfaces which can totally transform the appearance of the performance space in this exciting hi-energy show.

24K Magic is also currently one of the most talked about live shows of the year by the multiple Grammy award winning artist, following the release of his hugely successful third studio album of the same name at the end of 2016. 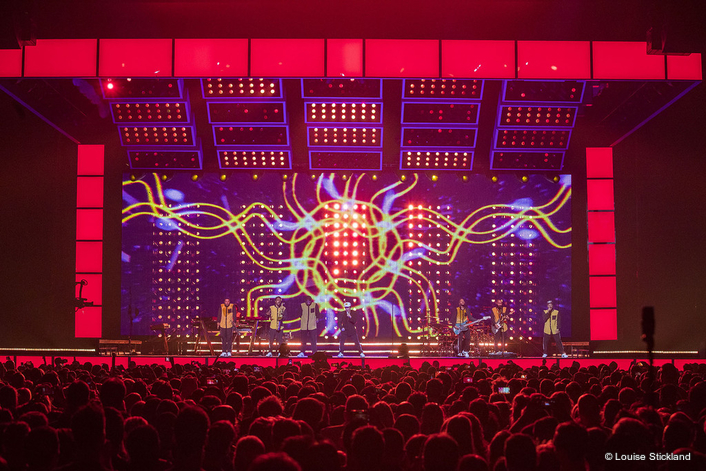 The worldwide lighting contractor is VER who made the massive investment in Spikies which were delivered by Robe North America.

It is a big and beautifully balanced visual collage of lighting and video – with live (IMAG) video director Steve Fatone cutting the camera mix, combined with eye-catching playback content produced by Empirical Studios. 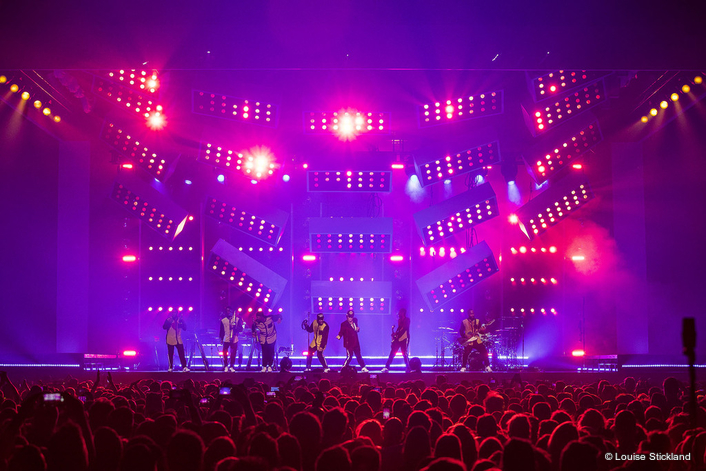 Bruno Mars himself was integrally involved with the evolution of the stage presentation, and he and his incredibly talented band also provide the final ingredient in this entertaining molten mix of intelligence, fun, wit … coupled with some awesome technology and imagineering!

Cory - who has worked with Bruno Mars since the 2011 ‘Hooligans in Wonderland’ tour and enjoys a great working relationship and dialogue with him - and Roy’s brief from the artist included references to a wide array of memorable shows. 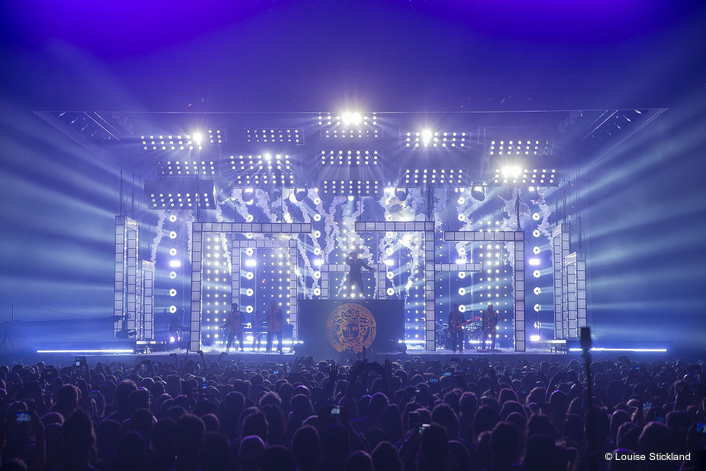 These included the huge iconic PAR can rigs of the 1990s that graced the stages of legendary artists like Queen, Michael Jackson and AC/DC.

“Bruno wanted power to the lighting as well as a clean stage and the feeling of an environment or room .. in which he was playing” explained Roy, “which inspired the synthesis of Versace showroom vibes and these massive retro lighting rigs.” So the show aesthetic is based on all these parameters plus the seating being sold to 270 degrees. 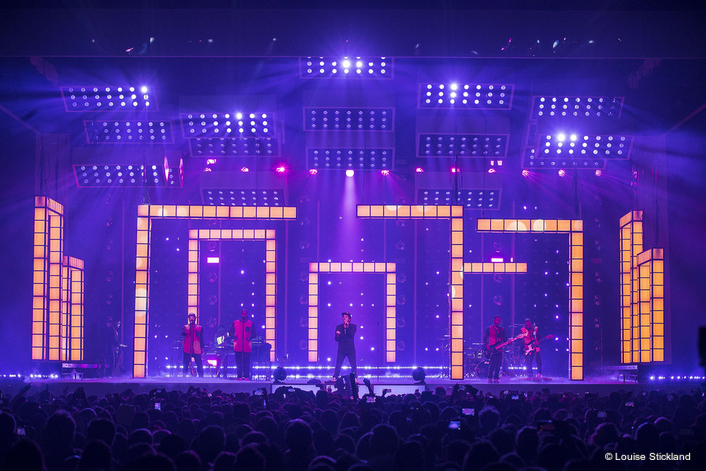 To recreate the wall of lights effect in a thoroughly contemporary context they needed a fixture with the right appearance that could also produce the diversity of effects required to keep the looks pumping throughout the hi-energy 2-hour show. The 16 action packed numbers embrace a plethora of musical styles and genres.

The fixture they sought needed to be lightweight enough to be practical on tour … and with that many on the rig and a lengthy itinerary already confirmed, it needed to be robust and reliable. 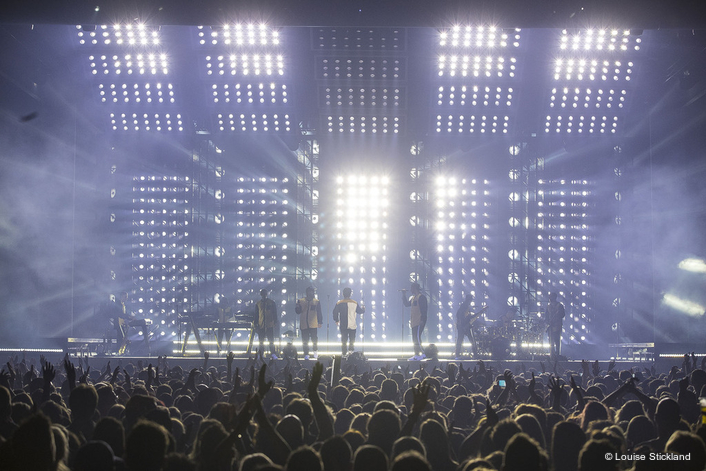 Several shoot-outs and tests were conducted to ‘audition’ fixtures explained Cory, revealing that the “unified look of the beam in the lens was a huge part of the Spikies winning out.” He also said that their speed was a big factor in addition to the 360-degree rotation, together with their multi-functionality and the flatness of the color field. On top of that, effects like the prism and the flower “really make them unique in their class.”

Roy added, “The Spikies were chosen for their versatility, speed and compact size … I wanted to pack as many units as possible into the pods!” 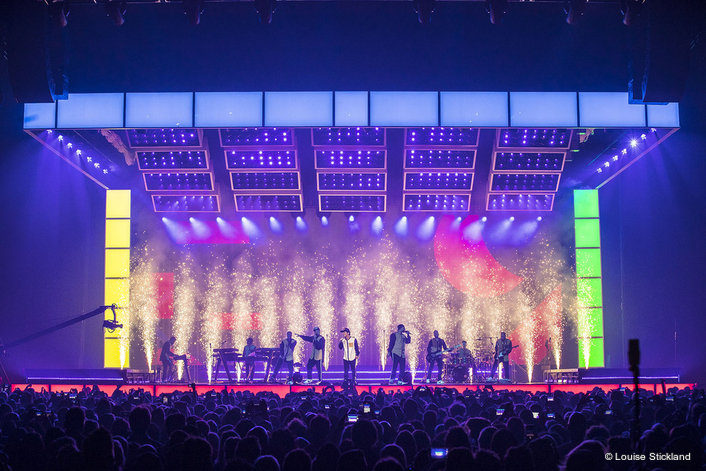 Three hundred and seventy-five (375) Spikies are built into five upstage columns, and the other 420 are contained in 20 moving over-stage pods, all constructed by TAIT together with the automation systems to move them.

The five back columns are each loaded with a 5 wide and 15 fixtures high matrix of Spikies, and the reverse side of the column is covered in an RBG LED ‘lightbox’ paneling material for contrast. They rotate to reveal the different sides throughout the show. 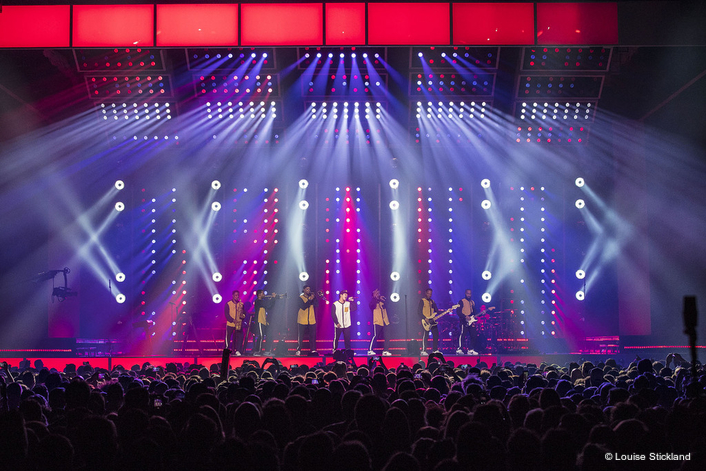 A large LED video screen also flies in at certain points just downstage of the columns, and at times this is lit through with the banks of Spikies, producing another dimension to the stage.

The 20 Queenesque pods over the stage are rigged in a five-wide-four-deep configuration, each loaded with a 7 x 3 Spikie format utilizing 21 fixtures per pod, and these move into a series of different looks throughout the set. 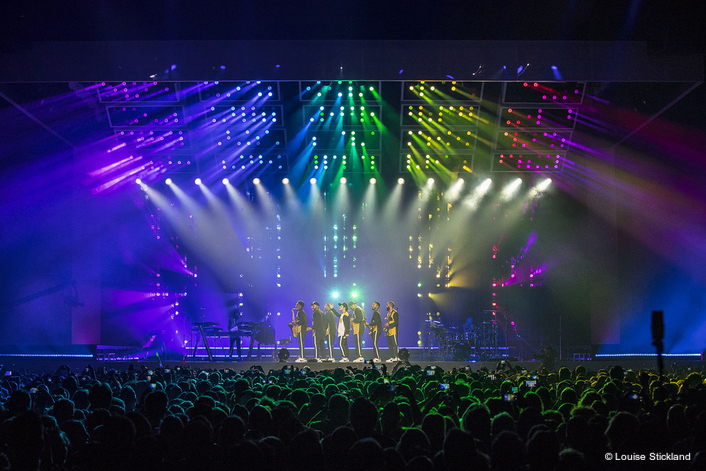 These moving Spikie columns and pods provide a huge scope to change the appearance and ambience of the stage and are used constantly throughout the show, each time bringing a totally new perspective to the space, matching the diversity of the performance.

For transportation, the Spikie pods and columns are de-rigged, have protective cover boards and wheels added and are rolled up the truck ramp – a swift, compact and straightforward exercise and a neat solution in part facilitated by the light weight of the lights. 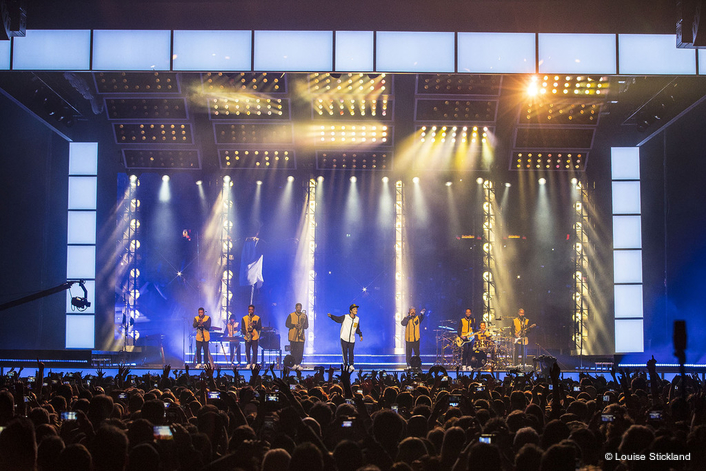 Some serious programming – on a grandMA2 full size - went into the equation. This was undertaken mainly by Cory assisted by Whitney and also Davey Martinez during the three weeks of production rehearsals at Rock Lititz Studio in Pennsylvania.

Cory commented that it’s a testament to “the fixture and its flexibility” that they can get a whole show simply by programming different looks and movements with uniform pods of lights. 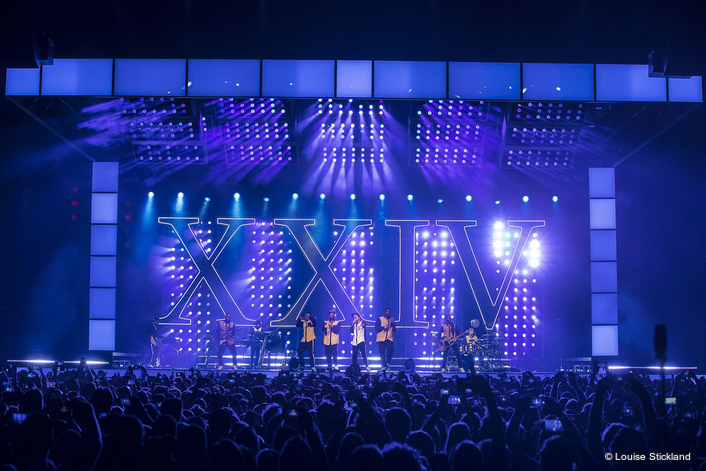 A VER lighting crew of 6 is teching and rigging all the kit on the road, crew chiefed by Soline Velazquez. The tour’s production manager is Joel Forman.

24K Magic currently continues to WOW crowds in Europe and opens in the U.S. in July! 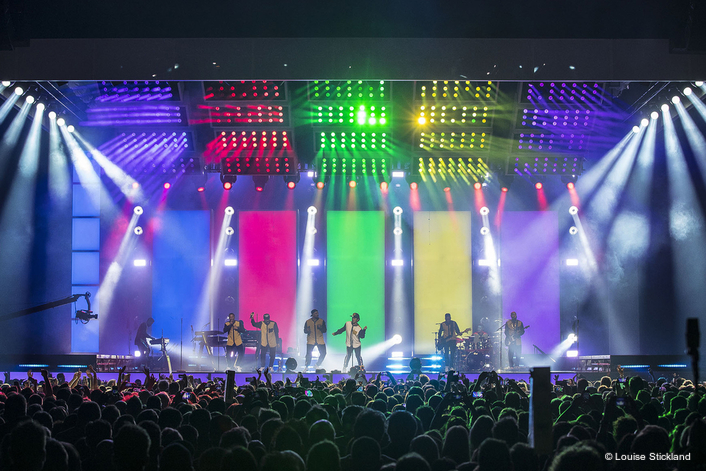