.
UK alt rock band Fightstar – critically acclaimed for their distinctive sound and experimental blending of numerous metal genres with orchestral and others - celebrated their 10th anniversary by playing five high profile shows dotted around the country, culminating in a gig at London's Brixton Academy, with a Robe moving light rig designed by Will Dart.

Ahead of the shows – spread out over three months and starting at the Forum in London -  Will received a list of bullet points from the band about what they did and didn't want to see in the show.

Coincidentally, this happened to be almost identical to the ideas he was already formulating in his head for the design. The basic premise was to have a dramatic beamy style of lighting that was fundamentally dark and moody, yet punchy and hugely powerful at the same time. 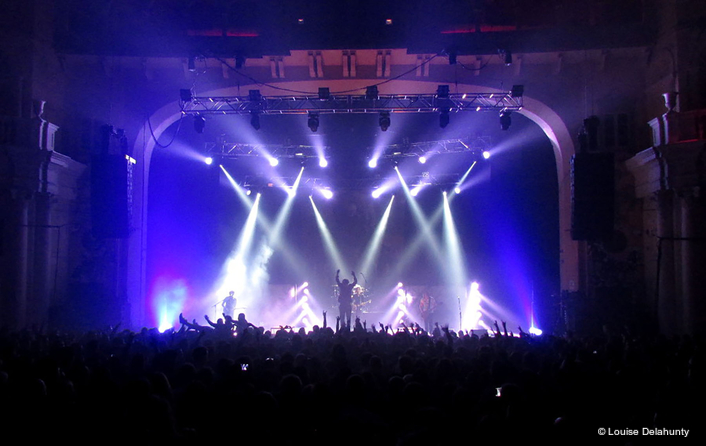 The design featured with four upstage 45 degree angled truss towers as part of the floor package, complete with six Robe LEDBeam 100s on each, the centre two of which 'framed' the drummer with big beams. A cage surrounding the drums had been one of their specific ‘effect’ requests. Will also used these arrays of LEDBeam 100s as striking ACL style looks that permeated the whole stage.

In the roof he positioned eight Pointes and 12 x LEDWash 600s. 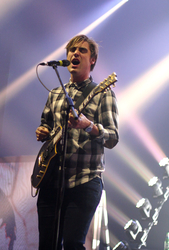 The overhead trusses measured 49 ft long in total but were split in the middle and twisted horizontally by about 20 degrees to make an arrow shape towards the back.

Will had initially wanted more Pointes, but as it turned out, eight filled the stage space absolutely perfectly!

"I was able to get a huge amount of massive looks out of these fixtures," says Will. He especially likes the 6 and 8-way prism effects in the Pointes, and they are frequently on his specs now, ever since he first used them on a tour in the US.

"The fact that the Pointe is equally good as a Beam, Spot or Wash fixture really brings endless possibilities to any show,” and means, “You can make a few fixtures go a very long way," he states. "The zoom is great, along with the gobos and colours, and I always push for Pointes when spec'ing a show or tour".

He's used LEDBeams for some time now, a trend that started after a show for Fightstar lead singer Charlie Simpson at the Roundhouse last year, when he made the most of the house's LEDBeam 100s. "I simply got sooooo much out of them ... The brightness is amazing for such a small fixture".

In addition to these moving lights, he had 12 x strobes and six blinders for the Brixton show, which was still essentially based on the initial design concept revealed at the Forum, but by this final show of the run of 10, it had undergone development and expansion.

The console for the Brixton show was an Avo Tiger Touch Pro.

The underlining ambience of the lightshow was classic metal and rock 'n' roll but not too garish. He used the LEDWash 600s for the base colours and augmented with the Pointes and LEDBeams which blasted through with surging power transitions and big crescendos one minute, falling away to more subtle, almost creepy and slightly unnerving deep colour looks the next.

The performance started with the backline and floor package concealed behind a black silk which flew out at the top of the show to reveal the set and the Fightstar backdrop, which was artwork from the second album, 2007’s seminal ‘One Day Son, This Will All Be Yours’.

The shows were a great success. Next on the Fightstar horizon is headlining the third stage at  the 2015 Download festival … with recording for a new album scheduled for later in the year.