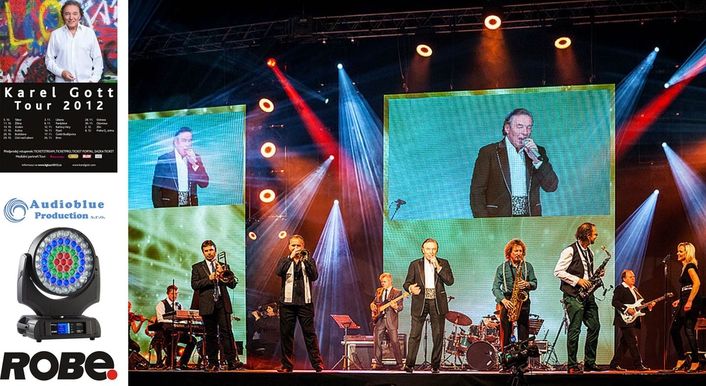 The tour played arenas throughout the Czech and Slovak Republics including Prague’s 18,000 capacity O2
It was the proverbial ‘match made in heaven’ when Lighting Designers Ladislav Hořák and Zdenĕk Mácha chose to use Robe moving lights at the core of their design for legendary singer Karel Gott’s recent tour.

Gott is the Czech Republic’s  most successful and best known singer. His impressive and dynamic international career spans six decades during which time he’s been at the forefront of many new and innovative musical trends, including being a pioneer of emerging Czechoslovakian pop music in the early 1960s. His numerous recordings have sold millions worldwide.

The moving lights comprised 22 x Robe ROBIN MMX Spots, 12 x ROBIN LEDWash  300s, nine LEDWash 1200s and eight ROBIN 600E Beams, all of which were spread out over trusses - above the stage and hung vertically at the back - with the LEDWash 300s on the floor.

Hořák and Mácha chose Robe not just because it’s a Czech brand – although both they and Audioblue are extremely proud that the country has one of the leading moving light manufacturers in the world – but because the fixtures are “Rock solid reliable”.

Also because of the vast amount of creative options the Robe units offer in lighting Gott’s diverse show, which embraces multiple musical styles and genres.

Each song had its own very distinctive look and feel, and the mediums of lighting and video visuals were a big part of a highly entertaining set that kept Gott’s enthusiastic fanbase – young and old - enrapt.

The show ‘visuality’ also succeeded in the challenging task of transforming the many ice barn-like hockey arenas on the itinerary into more intimate concert environments!

They made the most of the dual graphic wheel on the MMX Spots for adding texture on the stage floor and central runway, and also frequently beamed the fixtures out into the audience and up onto the roof of the venue.

Hořák and Mácha created some way cool effects by combining the 600E beams with smoke, and maximised the individual ring control of the LEDWash 1200s which were used to bring general theatrical ambience to the stage and bathe it in a fabulous range of colours.

Lighting on the road was operated by Ladislav Hořák using a grandMA2 light console with MA2 OnPC for backup.

Audioblue has invested in the latest Robe ROBIN technology in the last year, but their association with Robe goes back a lot further – they bought their first Robe AT Series fixtures over seven years ago.

These are still in very active service, and the ruggedness and quality engineering of the products has kept them returning for more!