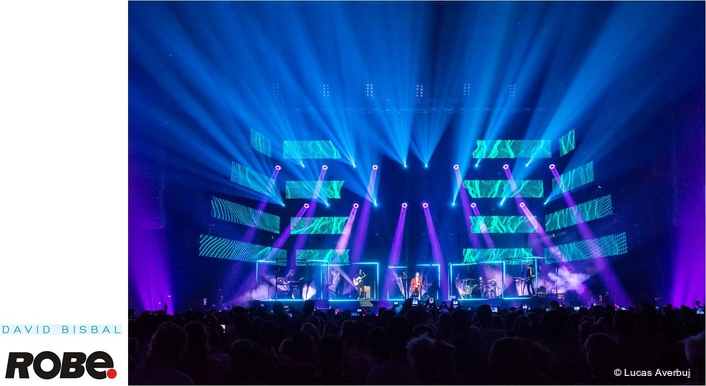 Barcelona based lighting designer Ezequiel Gomez has enjoyed working on Spanish Singer David Bisbal’s latest “Hijos del Mar” tour which has already played Spain and Latin America and is poised for more of the same in 2018. He chose Robe for the majority of the moving lights with Spiiders, Pointes and LEDWash 300s as key fixtures on the rig.

Ezequiel has been working for the artist since 2009. The stage and scenic design for this tour was a truly collaborative between the artist himself, Brian Sellei from Menos que Cero, Universal Music, Barcelona based LED specialists LEDSCONTROL and performing arts collective SomosLuz (We Are Light) of which Ezequiel is a member. 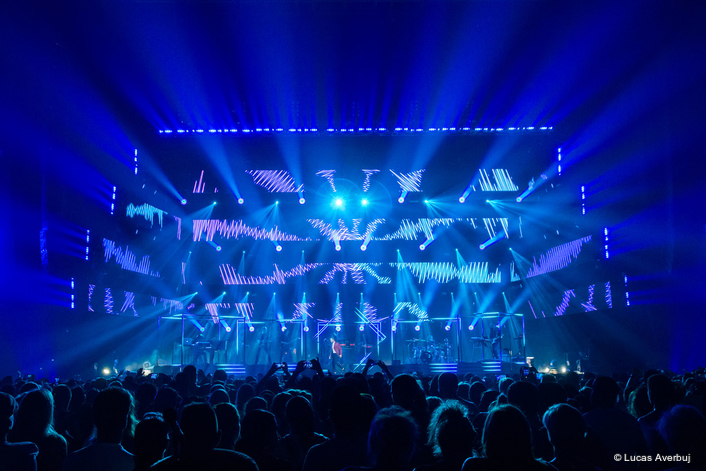 LEDSCONTROL presented the initial ideas from which the stage look evolved, coming up with an idea to have partially enclosed LED ‘cabinets’ for the band risers. Ezequiel and his team at SomosLuz adapted this ….and made it a tourable concept. The video was created with direct input from David Bisbal by the SomosLuz video department, headed by Lucas Averbuj.

The 24 x Pointes, 24 x Spiiders and 36 x LEDWash 300s were positioned on five trusses which wrapped around the back and sides of the stage and were also used for rigging a series of 4 metre wide by 1 metre high LED video screens.

LX 1 was the most downstage of these trusses and LX 5 the most upstage, the latter rigged with the 12 of the Spiiders. LX 4 featured 12 x Pointes and LX 2 and 3 were both loaded with 6 Pointes and 6 Spiiders alternating. The LEDWash 300s were all on the side trusses. 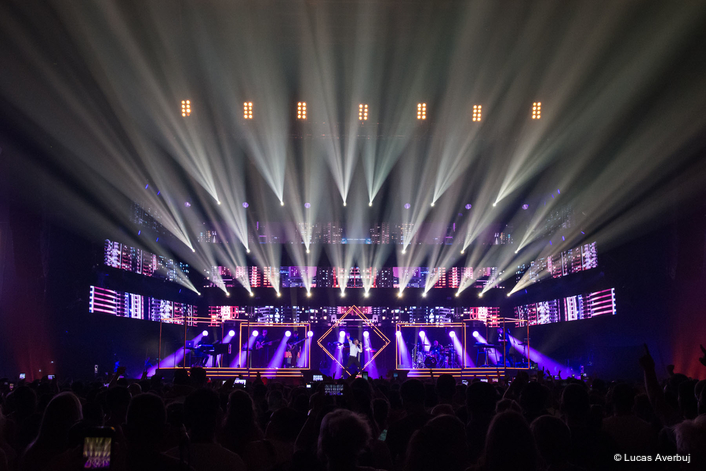 The LEDWash 300s were used to illuminate the band from that specific angle, applying colour and density across the stage. Ezequiel loves the expediently sized LEDWash 300 for exactly that … its excellent size-to-power ratio.

The Pointes – due to the huge range of effects they offer – were used extensively in beam and spot mode for numerous effects. “This fixture is SO versatile and durable” says Ezequiel, “Every time I have used Pointes they have been super-reliable and they have all the attributes I need to build a dynamic show”. He mentions that he is looking forward to trying the brand new MegaPointe!

The Spiiders were employed for what they do best, bathing the stage with rich, smooth striking colours and for potent rich back lighting. They capitalised on the zone control features and also the central flower effect as a scenic element to change the nature and perception of the performance space. 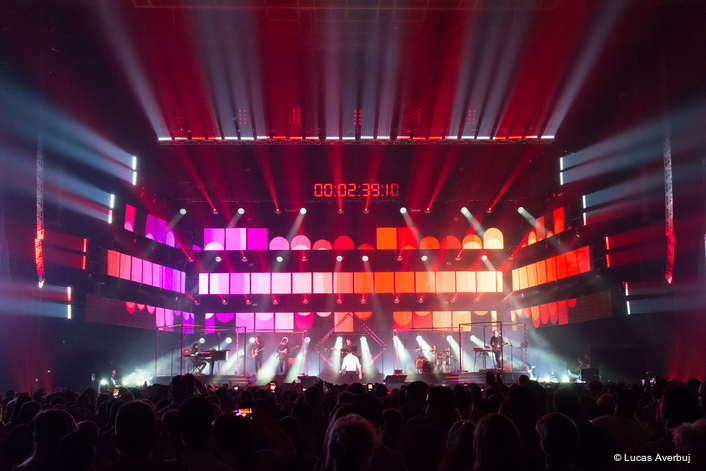 Spiiders were specified because “we like the quality of the light and the effects you can get especially from the hexagonal shape of the central LED and the fact it can be used as a scenic effect” … he has in fact used the idea of a hexagonal shape in several recent designs.

The overall visual design for the tour was based - and balanced - across these three distinctive elements … the strips of video screen, the lighting and the illuminated LED risers.

These worked together to create a coherent visual harmony. “There was a touch of 1980’s retro in this whole aesthetic” explains Ezequiel, adding, “Our designs are not just about effects and WOW factors although they have their place! It’s about bringing dramaturgy and emotion to the stage and sharing and communicating that with the audience”. 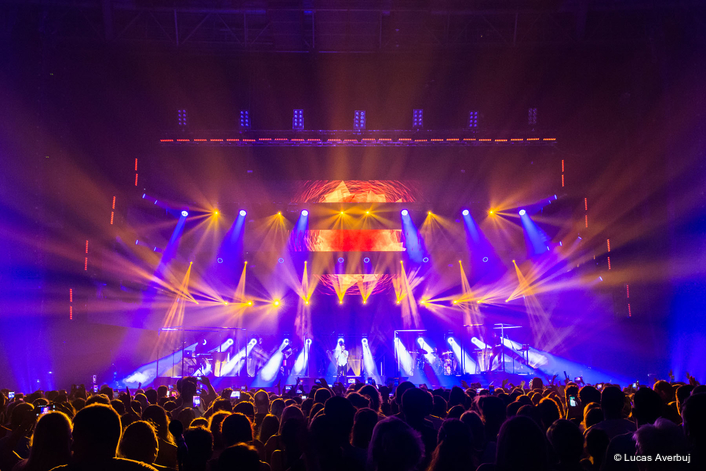 They do, of course, have all the effects as well – it IS a pop show – but there is a lot more depth to the performance, rather than a show just hanging on the next whizz-bang moment!
Ezequiel really enjoyed working as part of a team, and the experience of working with other designers and programmers all pulling in different ideas and synergies to the mix was “deeply satisfying and enriching”.

Ezequiel Gómez was born in Argentina and for the last 16 years has been based in Barcelona.  He has been a lighting professional for 22 years now and is completely passionate about the job.

He loves many aspects including having the chance to create ‘live art’ and being able to help generate energies onstage and convey these to the audience, “We are all connected – the artists, the organisers, the creative, technical and stage management crews and the audience - and when a live show all comes together as it should … it’s a truly amazing experience!” 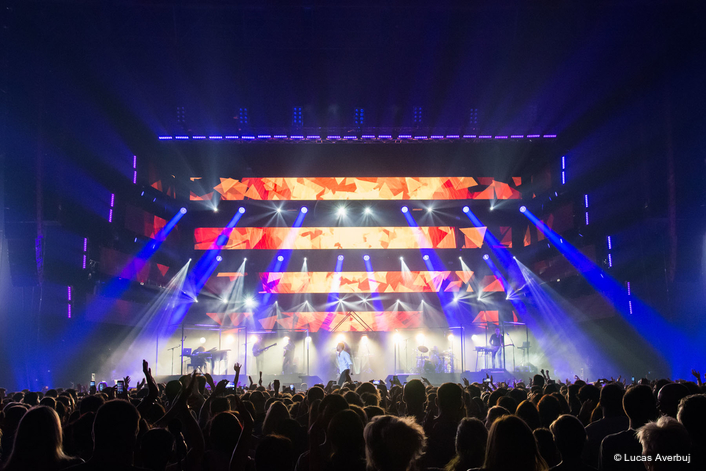 Every night, the moment he truly relishes is when the lights go off and the show starts … it’s those goosebumps down the back!
He programmed the ‘Hijos del Mar’ show during production rehearsals with Caco Garcia and operated it himself on the road.

Lighting equipment for the Spanish leg of the tour was supplied by leading Spanish rental company Fluge who have purchased all their Robe fixtures from Spanish distributor EES and their lighting crew chief was José Miguel Velázquez.
IMAG video cameras were directed by Iván Gárcia Fernández,  Antonio Allue was the stage manager, Aitor Sanchez Crespo tour managed and the tour’s production director was Ricardo Yago López.

Ezequiel first started working with Robe products back in 2005 encountering with Spot 575 XTs when he was working at Barcelona’s Razzmatazz venue.
It was on David Bisbal’s “Tu y yo” tour in 2014 that he first started working with Pointes and he has utilised them for most designs since then.
“I think Robe is one of the top brands on the market right now,” he concludes.